She wants to make history: to be the first Kenyan Karate Woman to take part in the Olympics.

Rose has always done things differently from other girls. Growing up, she hung out with her three older brothers and their friends, taking part in all manner of antics – from stealing a neighbour’s maize to hunting and cooking game meat. She did everything with such passion that she became a leader in the group, deciding the most daring schemes the group would do.She became one of the boys, fighting whenever an opportunity presented itself. Being short and thin, she was always defeated. She hated loosing. So, she decided that, if forced to fight, she would use all her strength. 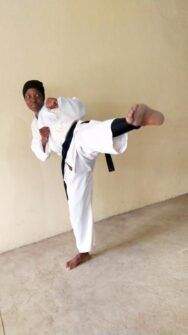 One day, she spoilt her brother’s paper ball by mistake. When he found out, a fight ensued, and she hit his stomach as hard as she could. Her brother fought back and won. The next day, as they were chatting, her brother confessed that his stomach still hurt. This was the first time she had an inkling of how lethal her punch could be.
Had Rose gone to an all-girls high school, as is usually the case, she probably would not be the popular ‘karate champ’ she is today. In her school, to get girls’ attention, the teenage boys would grab something belonging to one of them and ask her to collect it later from his desk, thereby giving him a chance to talk privately to the girl. The boys enjoyed the game. The girls did not.
Rose hated it. 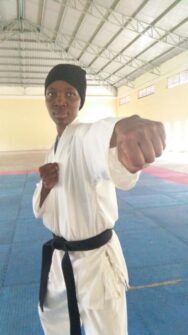 She decided to join the karate club to learn to fight. Assuming she would beat anyone at the slightest provocation, the boys did not touch her things. How wrong they were! They did not know that karate abhors violence and encourages karatekas (karate practitioners) to make peace in an altercation rather than fight.
Initially, many girls joined the karate club, but only a handful persevered. They could not bear the body pain that came after each training session.
Rose, instead, did not mind it, and gradually became a good fighter.
Rose loved the sport and decided to pursue it as a career. This meant that, after high school, she had to leave home, in Mũrang’a County, and go to Nairobi. Why? Since she wanted to take karate to a professional level, she needed to train under a teacher recognised by Kenya Karate Federation (KKF), a kind of expertise that could be found only in the capital.Unlike many other women who approach karate to learn the ABCs of self-defence, Rose decided immediately that this would be her ‘sport’.
She was introduced to KKF Secretary General, Gabriel Mutuku, who was training karatekas in Nairobi. Gabriel has been in karate since he finished high school. His career spans over 20 years. As a young man, he joined the Police Force and soon started looking for opportunities to compete in the sport, asking for time off to take part in matches. His interest was so evident that the Force sponsored him to participate in different tournaments. 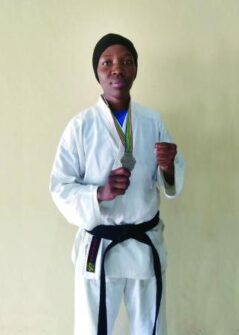 This helped him nurture his talent. Eventually, after participating in several tournaments, he made it to the Kenya Karate National Team, where he represented his country, until he was 35, the maximum age allowed for competitive fights.
Rose would train with Gabriel three times a week. Her brother, who owned a shop, supported her, and when she was not training, she helped him. After sometime, she got a part-time job as a karate instructor of kids. She perfected her skills, while waiting for the Kenya Karate Open Tournament, held once a year, where she would have an opportunity to get into the national team.
Her coach tried to dissuade her, because she needed more training before becoming proficient. And he was dead right! Rose, still a ‘green belt’, would be competing with ‘black belts’. Her chances to get to the national team were slim. Rose, however, who had never backed down from a challenge since she was a child, decided to go ahead. She kept telling herself: “It will be competitive, but I have been training and I am determined to make to the team”. She knew that the Federation gives equal opportunity to fighters who want to be part of the national team. If a young fighter manages to beat one who has been in the team for years, it is the ‘newcomer’ to enter the team, since he or she is seen as more ‘hungry’. And that is exactly how Rose got into the team. 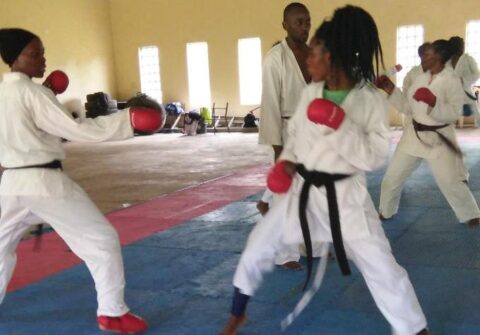 In countries where karate is popular, national federations look after the welfare of the national teams, making sure they get state of the art training equipment and paying salaries for the athletes and coaches. KKF, instead, does not have sponsors. Gabriel has always a hard time convincing potential patrons and promoters. It is a question of numbers: advertisers would invest their money to support popular sports – like athletics or football – rather than a sport, like karate, whose supporters can hardly fill a stadium during championships, though the entire ‘karate fraternity’ in Kenya is participating.
Some karatekas in the national team, who are lucky to be hired by the government like Gabriel, are allowed time off to train, while still getting a salary. But this applies only to half of those in the national team. The other athletes of the team train when they can get time off work, normally, early morning, evening and Saturdays. The only time they get a full day training is when the government sponsors a camp, which normally is held two weeks before international championships.
Rose’s first international karate tournament was in South Africa in 2014. She was expected to fight a woman from France, and she felt intimidated. This fear increased when she watched them expertly
win their fights.
Rose closed her eyes and told herself: “Juts fight as you always did when you were a child, facing an indomitable opponent: strike first with a powerful punch”. And when the referee gave the start signal, she launched herself to the attack and hit the opponent with a devastating punch in the stomach. It was clear that she had taken the blow.
Rose smiled inside. She had found a way to beat her. Rose’s strategy was to get her out of the ring four times, which would amount to a defeat. Karate is not like other sports where skill determines the winner. Karate greatly rewards the fighter’s ability to resort to cunning moves. And Rose’s wiles helped her win. 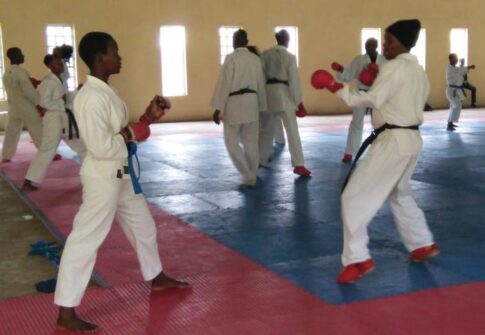 Rose does not cry easily. Yet, that day, her eyes were glazed over, and she had to strain rather hard to hold back her tears. It was the proudest day of her life. She had won the gold medal for her country.
Rose is now training for the Olympic qualifying fights, since Karate will make its debut at the 2021 Summer Olympics Games in Tokyo, Japan. She trains three times a week for about three hours with the team, before going to work. When she gets home in the evening, she goes on the Internet to practice the moves she found difficult during training. She works hard with what she has, not dwelling on the lack of proper equipment or enough hours to train. She wants to make history: to be the first Kenyan Karate Woman to take part in the Olympics. With a bit of luck, she might win the gold medal for Kenya, as she did in South Africa.