It is used for a treatment of a number of diseases. The plant can be prepared in a number of ways such as decoction, maceration and infusions.

It belongs to the plant family Fabaceae and is a deciduous tree that is widely distributed in tropical Africa. It is heavily branched forming a spreading dome-shaped crown. It usually grows up to 35m in height with a straight, cylindrical bole that can be branchless for up to 22m and a girth diameter of up to 100cm. It is usually unbuttressed, but can have small, thick buttresses up to 1.5 metres high. The leaves are bipinnate, pinnae 3-6 pairs, and leaflets 6-11 pairs, oblong to elliptical and 13-33 mm long, 5-17 mm wide, rounded at the apex, subglabrous except for a few hairs on the midrib beneath. 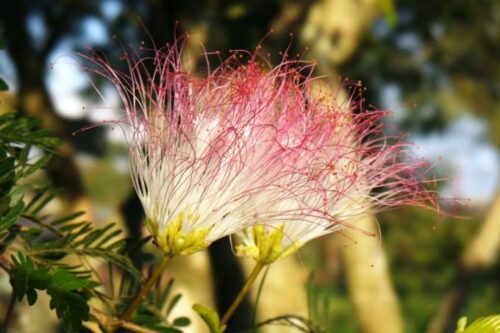 The flowers are subsessile or on pedicels 0.5-2 mm long; minute bracteoles, 1.5-2 mm long usually falling off before flowering. The calyx are 3.5-6.5 mm long and not slit unilaterally, puberulous outside, with few short stipitate glands. The corolla are 8-13.5 cm long, white and puberulous outside. The fruit is a pod of about 10-21 cm long, 2-5 cm wide, glabrous, brown or purplish-brown in colour when matured with a tapered or acute apex. The tree is harvested from the wild for use as timber and medicine. It is sometimes grown as an ornament in homesteads and as roadside trees, valued especially for its bright green splashes of new foliage growth and showy flowers.
The stem bark and leaves are the major medicinal parts of Albizia coriaria used for treatment of a number of disease conditions including cough, sore throats, syphilis, skin diseases, jaundice, and eye diseases and for use as a general tonic throughout the communities in which the plant is distributed. These plant parts can be prepared in a number of ways such as decoction, maceration, and infusions before administering based on a given disease condition. 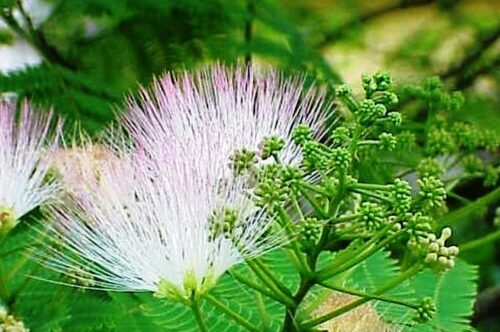 The leaf decoction is used externally to treat headache, and as a wash or steam inhalation against fever, and gargled to relieve toothache. The leaf decoction can also be applied as a wash to kill head lice. A maceration of the leaves is administered as an enema to induce abortion. The bark is often used in traditional medicine and considered an astringent and vermifuge. The bark decoction of Albizia coriaria is often applied to stop bleeding from fresh wounds. It is also administered for the treatment of intestinal worms. Similarly, the bark decoction is also used for the treatment of dysentery, bronchial affections, and pain caused by fever. The stem bark is also boiled with water and the resultant decoction cooled and applied to the skin for the treatment of sores, pimples, and other skin ailments.
In addition, the steam from the concoction, once inhaled, can cure fever. The liquid can also be used to treat toothache. A bark maceration is drunk and/or applied as a wash to treat jaundice. 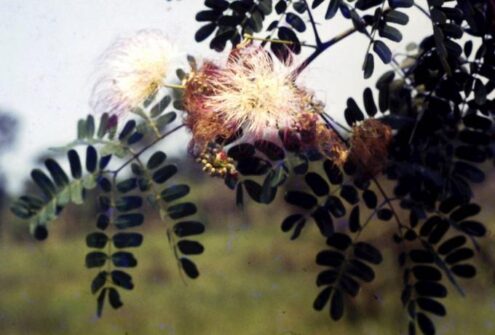 The bark has also been reported to be useful in the treatment of anaplasmosis and used as such is also used in the treatment of malaria. The bark decoction is taken orally to relieve one from anxiety, depression, sleep problems (insomnia), to improve mood, and to reduce swelling associated with trauma. It is also applied to the skin to treat insect bites, fractures, and sprains. In some communities, the bark of Albizia coriaria is used for the treatment of menorrhagia, threatened abortion and post-partum haemorrhage. The roots and bark in concoctions with other herbs is used in treating venereal diseases.
The medicinal activities of Albizia coriaria may be attributed to the various phytochemicals it contains including saponins and alkaloids. 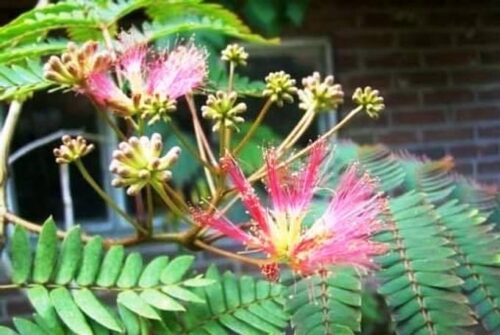 Apart from the ethno-medicinal uses in treating human diseases and disorders, Albizia coriaria is also known to be important in ethno-veterinary in that the bark decoction is used in treating cattle diseases and a number of abdominal problems associated with protozoan parasites. The leaves are a source of saponins and are sometimes used for washing clothes.  In some homesteads, the leaves are also used to cover bananas in order to hasten their ripening. The branchlets have been used as firesticks. It is used for construction, light and heavy flooring, staircases, furniture, cabinet making, joinery, turnery, implements, and carvings. It is also suitable for carpentry, musical instruments, railway sleepers, and the wood is a vital source of fuel.