The people of the rain, Ñuu Savi, in the Nahuati language of the Mestizos, live in the states of Oaxaca, Puebla and Guerrero in central-southern Mexico. To the present day, they have persisted with their daily practices, their forms of social organisation, their language, health system, respect for nature and their religiosity in
their view of the world.

One of the most important aspects of these people is their view of the world that consists in thoughts, ideas and concepts that are transformed into words, actions and practices which earn them the name of men and women of the rain, as a people and a culture, and enables them to establish accords and respect, to reaffirm the ties of the community and with nature. This philosophy also gives meaning to life, to time and to the expectations in the Ñuu Yivi, the world and the practices
that are followed. 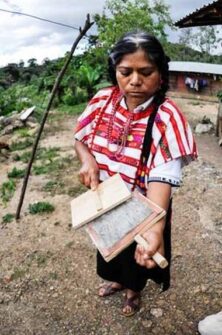 The people of the rain, Ñuu Savi, are closely correlated to the sacred divinity Savi which means ‘rain’ but which, in terms of sacredness, acquires the meaning of ‘sacred rain’. The mother tongue is Tu’un Savi, Word of the rain.
The people of the rain live in three states: Oaxaca (Ñuu Nduva), Puebla (Ñuu Ita Ndio´o) and Guerrero (Ñuu Koatyi). Some of the places where the members of the people of the rain are found are: in Kiu’un (the mountain), Ñu’u Ñi’ni (warm country), Ñuu Ndivi (coast) and in the diverse geography of the vast territory where they coexist and which they share with other indigenous populations, the Mestizos and people of African descent.

Social and ritual organisation
The word Mestizos is of Nahua origin and refers to ‘the people of the place of the clouds’. Since the coming of the Spaniards, this term has been used by other peoples and cultures to refer to the Ñuu Savi people and the cultural region known as Mixtec. The people of the rain, Ñuu Savi, today number about half a million.The identity of the Ñuu Savi is based upon their language, history, vision of the world and community ties. For centuries they have kept their system of social and ritual organisation that reaffirms their identity with such sacred entities as rain (savi), lightening (taxa), wind (tatyi), hills (yuku), clouds (viko), plants and trees, animals (kiti), caves (kahua), rivers (yita), the earth (ñu´u), the dead (ndií), seeds and cereals such as maize (nuní), beans (nduchi), pumpkins (yikin), the spirits of the mountain and other divinities. 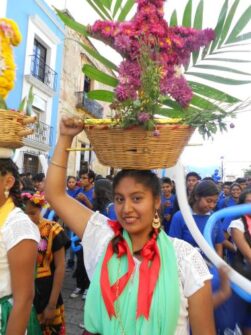 The symbolic nucleus of their identity is rooted in the rain. Yoko Savi is the spirit of the sacred rain who is invoked during the month of April, provides water, food and blessings, ensures life and makes seed germinate so that life may be born in the world.Feasts and rituals rotate around two centres: the dry season and the rainy season. In October and November, the feast of the dead, Viko Ndii, is held. This feast involves the meeting of neighbours in various places and is the day on which the authorities are chosen since it is a propitious moment that has the spirits of the ancestors as guests of honour. These acts revitalise and reinforce the collective historical memory expressed in the assumption of community mandates. The authorities must carry out their duties; otherwise, the spirits of the ancestors will bring justice to the community by conceding harmony or inflicting punishment. In religious life, Catholic saints have been reworked to adapt them to their system and their own calendar of feasts Ñuu Savi. Thus we have Saint Mark connected to Yoko Savi, the entity and the spirit of the rain and Saint Michael with that of fertility.

Our land, Ñu´u yo
As the symbolic and sacred character of the relationship between earth, nature and the people of the rain, Ñuu Savi is demonstrated through various ritual or ceremonial practices. The land and the territory have a symbolic and sacred meaning in the world view. For this reason, people, land and territory are closely intertwined with their understanding of the universe. At the origin of the world, it is precisely in the caves that the original myth is created and, according to the elders, where water, wind, fire, the land and the mountains are articulated, as well as the grains of maize and other divinities to give food to the Ñuu Savi villages. 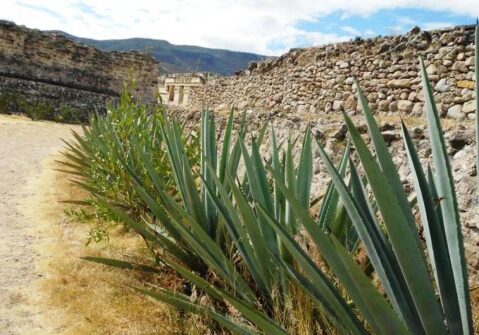 In line with their world vision, the cult of the Savi, the rain divinity, is carried out in the open, on top of the highest hills and in the caves from where new water springs, the original water that rises from the depths through subterranean infiltrations and springs. Thus, the rain is initially born of the earth to which it is closely tied since both together constitute the germinal force par excellence. On the other hand, this same germinal power present in the caves is the element that sacred Mestizo history is described as that which gave life force to the founders of their more important lineages. Therefore, both vegetative life and human lineages have their origin in the sacred caves that exist in the Ñu’u Savi.
Ñu´u is the concept that refers to the earth, the material space in which we find ourselves. Thus, in line with the linguistic root: Ñuu yo is the people and what encloses the earth and the material elements in which we find ourselves, but refers to our land as the collective space where life is lived. Therefore, Ñuu yo is our people and also our earth. Then we have the Gnu Yivi: the People of the People, but the connotation is that it refers to the world, the place where living people, humanity, dwell. Then there is the Ñuu Ndii, the place of the dead. 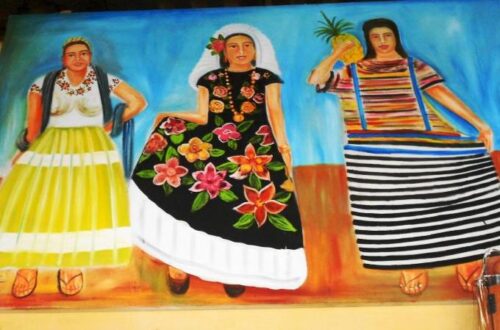 The hills are the places where the divinities and spirits live and they are considered sacred and to be respected. In the geography of the Mountain, there are many places of this sort. The population go to the tops of the more important mountains to carry out prayers and invocations. There are encounters with spirits and the forces of nature.
The struggle for the defence and re-claiming of the land means fighting against aggression towards the land and the plundering of natural resources. For the people of the rain, Na Savi, is a matter of: Na kundoyo, na ku taku yo va´a xiin na ntaan yo, xiin na vee yo, which means ‘Living well and getting along with our brothers and those of our house or family’.
‘Living well’ means living together in a social or territorial space in personal and collective harmony and having the resources necessary to live with justice.
Kuu taku yo refers to existence, to germination as Na yivi, people and human beings in their own land. This is why it is commonly said: An sivi ta yivi kuun?, ‘Are you not people?’ Therefore, to be a people means having a name, a place, a sense of attribution, and a land.