Everything was against her. Aminata Gaye – Mina ‘the veiled one’ is her stage name – was raised in a traditional Senegalese family, when she realised that music made her a self-confident person, she knew there was no way back. She started to fight for her dreams and for a better society.

“I cannot be easily manipulated. I go my own way and nobody can stop me”, said Mina in an interview with the BBC in 2019. She has been wearing a veil since she was a child, as it is part of her identity, and she is proud of this garment that often stirs controversy. She points out that just like some rappers wear glasses, or a cap, or shave their hair, she feels comfortable wearing the veil. 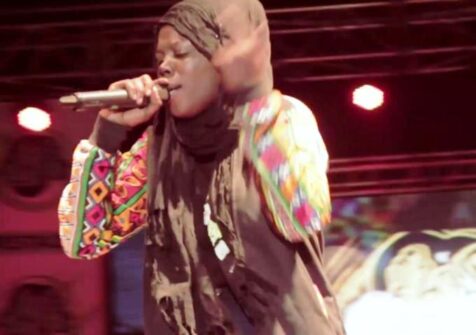 In the early stages of her career, the backlash from the public was very harsh and demeaning. Many people felt as though a Muslim woman rapping in a veil was inappropriate, but those opinions could not stop Gaye. “In my first three singles I tell my story: what the veil means to me, and how everybody was against the idea of a rapper wearing the veil. They all suggested to me that I did not wear it because they were convinced this garment was incompatible with music”, says Mina in a firm voice, being confident that she has made the right choice.
Mina is also a member of Genji Hip Hop, a group of approximately 70 women that includes Senegalese rappers, singers, DJs and graffiti artists who hold regular concerts and workshops addressing important issues such as social taboos surrounding women’s rights, family pressure, early marriages and physical and verbal rape. You can feel the strength and determination in Mina’s lyrics and rhythm. “When I sing, I am someone else – she says -. I don’t feel anything anymore. I feel invulnerable, powerful, and happy”. “Shame is what the rapist, not the victim, should feel. Yet his shame is transferred to the victim”, the ‘veiled rapper’ underlines, addressing women especially those who have chosen to wear the veil and who are increasingly numerous at her concerts. Mina got married three years ago. Her husband is also a rapper and completely understands and supports her passion for music, and does not complain when Mina comes back home at dawn after giving a concert.
Both her family – who stopped insisting that she dedicate herself to something else rather than music after seeing her determination – and her husband understand how important music is in her life. “I spend two or three days at my husband’s house and then I return to my place. I am a rapper, and I need my space”. Aminata Gaye has become one of the most popular woman rappers and hip hop singers in Senegal, despite her having to sometimes face a harsh backlash from social media. “They have even defined me as the incarnation of Satan and a desecrator of religion”.
But Mina ‘the veiled rapper’ does not shut up, does not give up. No matter what her critics say. Through her music, she hopes to encourage women to see the ways in which they can oppose structures of abuse and violence by using their voice and finding strength in their image. She believes in women’s power, “We, the women, are strong, and we have always been so, we have been able to influence rap and break taboos by rapping about women’s rights”. That’s Mina’s style. (Drawing: Tina Ramos Ekongo)