President Déby’s sudden death has left a huge vacuum. The stability of the country and beyond of the entire Sahel region, is at stake.

President Idriss Déby Itno’s death, announced on the 20 April by the army spokesman General Azem Bermandoa Agouna has meant a terrible loss for Chad. Accordingly, the       68 years-old President who was in office since 1990 died in the North of the country in a combat with rebels who had launched an offensive on the 11 April, on the day of the presidential election which was won by Déby by 79%.
But the circumstances of his attempt to obtain a sixth mandate
were controversial.
Observers say that such mandate was a violation of the constitution which limits the number of presidential mandates to only two. Then, according to the US-based NGO Human Rights Watch, the pre-election period was marred by a ruthless crackdown on opponents. On the 22 April, in a communiqué, the Paris-based “Collectif de solidarité avec les luttes sociales et politiques en Afrique”, a coalition of African opposition groups, the French Greens and the leftist Parti de Gauche, stressed that the election was boycotted and did not have more value than previous ones since all were marred with massive fraud. Besides, in 2008, the opposition leader Ibni Oumar Mahamat Saleh, was assassinated.
Furthermore, Déby’s uncompromising attitude during his 31 years rule provided arguments to rebels who consider that no political change is possible through the ballot, since elections were systematically rigged. 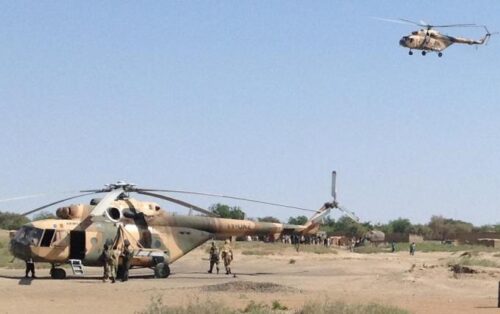 Déby’s death occurred after the rebels of Mahamat Mahadi Ali’s Front for change and concord in Chad (FACT) launched their offensive from the Tibesti mountains. The area is the home of the Gorane tribe of the former President Hissene Habre, who serves a life imprisonment sentence in Senegal for crimes against humanity, who was ousted from power in 1990, by his adviser on defence matters at the time, Idriss Déby.  A former political exile in Paris, Mahamat Mahdi Ali, has been involved in rebel activity since 2016. He first operated from Sudan then settled in Libya where he first fought simultaneously against the Islamic State and Gen. Khalifa Haftar’s National Liberation Army before he decided to strike an alliance with the latter in 2017.
From then on, he established a sanctuary near the Chadian border in the Southern Al Djoufrah district.
On the 19 April, the Chadian government first claimed it had stopped the rebel offensive in the provinces of Tibesti and Kanem. Allegedly, 300 rebels died in the combats. But on the 20 April, the FACT denied such toll and added that he wanted to create the conditions of political change and organise a round table of all Chadian political forces. The rebel group also claimed on its facebook page that its forces had begun “the liberation of Kanem region.”
Until now, it has not been possible to independently corroborate the Chadian army’s version given the remote location where the fighting took place. In addition, the Chadian army failed to provide details about the circumstances of Déby’s death such as where, when and how it did occur. The official version was challenged on the social media which claimed that he was assassinated in the context of an internal conflict inside his Zagawa tribe. Yet, these sources do not either provide verifiable details. There is no doubt though that the last election confirmed the divisions inside Déby’s family. 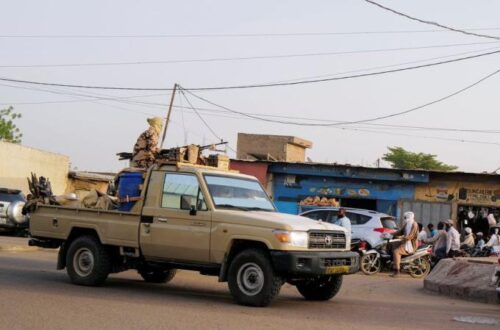 One of his nephews, 47 years-old Yaya Dillo Djérou, stood as presidential candidate against him. Between 2005 and 2008, Dillo participated to an insurrection of Zagawa military against Idriss Deby, before becoming minister of Mines and Energy. In May 2020, he even accused publicly, the President’s wife, Hinda Deby of conflict of interest alleging that her foundation absorbed unduly, funds to fight the Covid pandemics. On the 27 February 2021, the presidential guard besieged his home and 5 people died in the shootings with Dillo’s guard including his mother and his son.
Whatever its circumstances, the President’s death has been followed by a constitutional coup that might increase the fragility of the regime which obviously fears the citizens’ reaction as showed the deployment of armoured vehicles in the streets of Ndjamena on the 19 April. On the following day, an army spokesman announced that free and democratic elections would be organised after a 18 months transition during which the country will be ruled by a military council chaired by Deby’s son, four stars general and commander of the presidential guard, Mahamat Idriss Deby Itno, who appointed immediately 14 generals to form a transitional military council (CMT) and dissolved the government and the parliament. 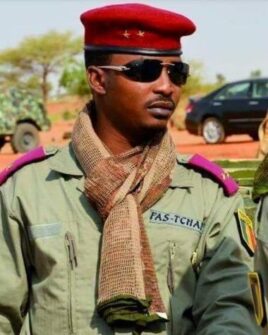 Such decision caused an outcry among both African and French civil society organisations. They said that the military violated the constitution which stipulates that in the event of a vacuum of power at the presidency, the national assembly speaker becomes the interim president and elections have to be organised between 45 and 90 days later. In order to defuse such critics, on the 26 April, the transition military council appointed a civilian as Primer Minister, a former MP from Southern Chad, Albert Pahimi Padacké and on the 4 May appointed a transition government including two members of the opposition leader Saleh Kebzabo’s Union nationale pour la démocratie et le renouveau party. Yet, the most strategic portfolios went to the military. The questions is whether Mahamat Deby will manage to impose his authority to the army generals and to the Northern tribes and whether he can replace his father as the main leader of the G5 Sahel coalition.
On the domestic front, the situation of the new government is extremely fragile. Despite the participation of an opposition ministers in it, the grassroots disapprove. Several demonstrations took place on the 27 April in Ndjamena and cities of the South, urging the military junta to resign and hand over power to civilians. At least, nine people died in the incidents and 600 were arrested. On the 8 May, the Chadian police used tear gas to disperse demonstrators in Ndjamena and open fired on them, injuring one person, reported France-Presse news agency. 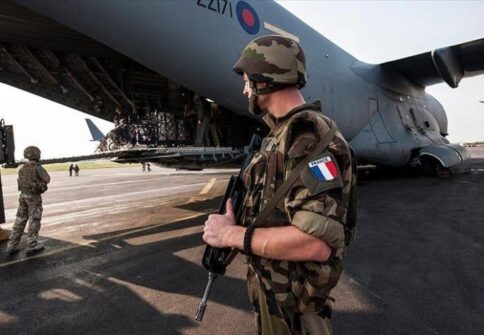 According to AFP, a small group of demonstrators burnt French flags to protest against France’s support to the regime, expressed by President Emmanuel Macron who was the only Western leader to attend the funeral. Chad is indeed France’s most precious ally in its war against jihadism in Sahel. It hosts the headquarters of the French Barkhane operation in Ndjamena. Not only did France abstain from condemning the constitutional coup but became also involved in the conflict between the rebels and the Ndjamena authorities, complain the FACT. In a communiqué from the 3 May, the rebel group accused the French Airforce to collaborate with the Chadian army.So far, the new President, Mahamat Déby has taken a hardline against the rebels. On the 24 April, the rebel leader Mahamat Mahadi Ali offered to hold a ceasefire but it could not be implemented because rebel positions were bombed by the Chadian army. Then, on the 25 April, the military junta declared that it would not negotiate with the rebels.
Mahamat Déby also ignored advises for a dialogue and negotiations with the rebels from former President, Goukuni Weddeye whose approach was shared by the African Union which appointed the presidents of Niger Mohamed Bazoum and Mauritania Mohamed Ould Ghazaouani as mediators.Those who urge the government to compromise are aware of some key facts.  The FACT is indeed posing a serious military threat.
Its 700 to 1,500 fighters, according estimates, have fought with the troops of Marshall Haftar in Libya, which are supported by Egypt, the UAE and French special forces and boast from a better equipment than average Chadian rebel movements, including armoured vehicles and artillery. This group has three bases in Southern Libya and was established in 2019 on the Brak Al Shati base where the Russian Wagner mercenaries gave them weapons. 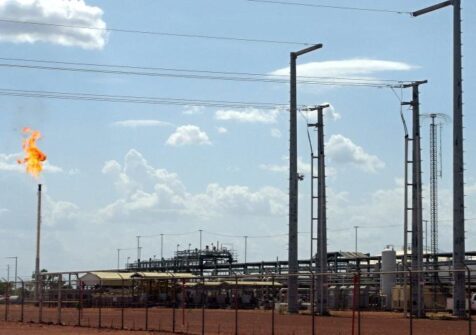 The French political scientist Roland Marchal warns about the danger of a potential connection of the crisis in Libya and in North-Eastern Nigeria, the sanctuary of the Boko Haram jihadists. Besides, the other borders are unsafe: the Central African Republic is a collapsed state and in Sudan, Darfur has been a sanctuary in the past for Zagawa rebels. Inside the country, on the shores of Lake Chad, Boko Haram boasts from the support of the Boudouma tribe. In Chad, the Déby regime is unpopular because the dividends of the oil bonanza have not been shared evenly. Déby used most of its 4.5 bn dollars of bonuses from Chevron to buy weapons, expand the military apparatus and pay for mercenaries including helicopter pilots and retired French colonels. Most oil contracts were allocated to feed the patronage network of Idriss Déby Itno and his wife Hinda Abderahim Açyl.
The consequences of Idriss Déby’s death are likely to be felt far beyond the country’s borders. Indeed, the Chadian military also has played a major role in the struggle against the jihadist threat in Sahel, contributing troops to the U.N. peacekeeping mission in Mali. Chadian troops also have fought against Boko Haram in the volatile Lake Chad area. Some 1,200 soldiers have been deployed in February in the ‘three borders area’ between Chad, Libya and Niger.
If the situation became more critical in Chad itself, Chad’s G5 Sahel allies (Niger, Mauritania, Burkina Faso and Mali) and France, fear that part of its forces would be diverted from operations against the jihadists. There is no doubt that this situation will make it more difficult for the French government to reduce its military presence in Sahel as wish several opposition parties in France. Instead, France risks to be involved in another conflict through its support to the Chadian army since French military intelligence DGSE and COS special forces commandos are present around the Chadian president.