The Black Sea is situated in the centre of the vast geographical area that runs from the Adriatic to the Caspian Sea. Together with the Maghreb, the Mashreq and the Balkans, it constitutes one of the sub-regions of the Mediterranean Sea.

The different strategic priorities of the countries facing the basin with their heterogeneous historical and religious cultures render it a unique area of crucial importance. After the Baltic and the Mediterranean, the Black Sea represents the third European sea in strategic importance since it connects the Euro-Mediterranean space to Central Asia and the Caucuses; it is also the border between NATO and the Russian Federation, as well as being a fundamental crossroads for energy, commercial, and military interests in a continual state of mutation. 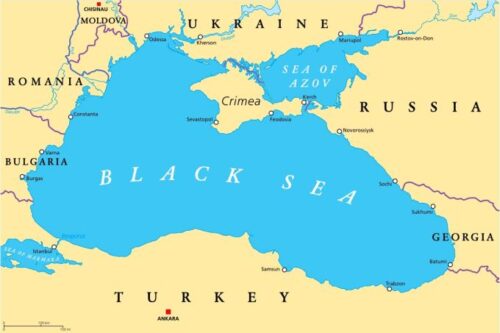 Due to its central position, it has been, in the course of millennia, a theatre of conflict between great empires and powers. Proof of this is the legendary war of Troy, between Greeks and Trojans, whose real motivations would seem to have been the conquest of that strategic ‘City of Gold’ built on a height from where it was possible to control the entrance to the Straits of the Dardanelles, at the point of passage between the Aegean and the Black Sea, and the ‘windswept’ surrounding plain. The shores of the Black Sea reach Bulgaria and Romania on the west; Georgia and Caucasian Russia (that spur of land that connects it with the Caspian Sea) to the east, Ukraine to the north and lastly, Turkey to the south which, by means of the Bosphorus Strait, the Sea of Marmara and the Straits of the Dardanelles, guarantees
access to the Mediterranean.
The area constitutes a macro geopolitical region with variable outlines, in which the major international actors are present. In this ‘Great Game’ are intertwined geopolitical questions of absolute relevance for global equilibrium even, as the Rumanian historian Gheorghe Brătianu believes, to the extent that, “The theatre provided by the Black Sea favours (…) considerations that go beyond the regional problems and become relevant to the forces that act upon universal history”. 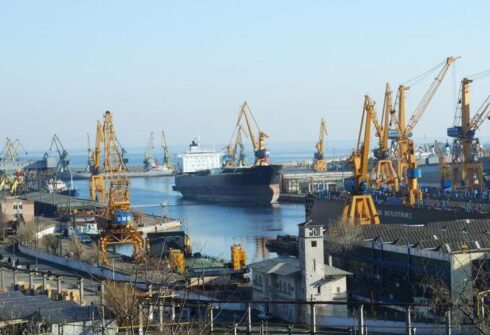 Apart from the global powers, the participants in the ‘Great Game’ include the non-littoral states – Armenia, Azerbaijan, Moldavia and Greece – expressing their protagonism derived both from their geographical proximity and their consolidated historical, religious, economic, and cultural connections that are shared by the littoral states.
In the period between the end of the Second World War and the early nineties, consigned to history as the ‘cold war’ between the Soviet and United States blocs, the area of the Black Sea was considered a static zone in that it was almost entirely under the control of the Soviet Union, with the exception of Turkey, a member of NATO since 1951.
With the end of the USSR, the geopolitical order underwent a drastic mutation that permitted the gradual penetration of the USA into the region. Countries like Bulgaria, Romania, Georgia and Ukraine – that up to then had been under the unquestioned ‘Soviet umbrella’ – moved their political axis towards the west, guaranteeing the USA consistent influence in the area of the Black Sea and to set up a western
outpost which  would have allowed it to control the area
of the ‘Great Middle East’. 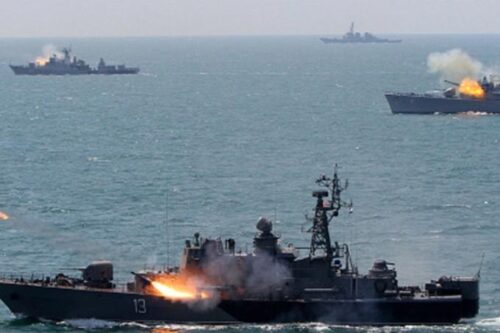 Bulgarian and NATO navy ships take part in a Bulgarian-NATO military navy exercise in the Black Sea, east of Sofia.

The Rumanian and Bulgarian post-communist élite showed immediate enthusiasm for supporting the American policy in the Middle East and, with the support of their countries within NATO, determined the incorporation of the Black Sea into the ‘operative zone’ mentioned in article 5 of NATO (mutual defence). This explains why, if a crisis occurred in the area – that endangered Euro-Atlantic stability, possibly affecting the security of the members of NATO – the military forces of the Alliance, activating a joint and combined task force (a deployable multi-national and multi-role force, with a land-based component and similar air and sea components), could have recourse to article 5 to activate military operations in response to any attacks. However, the ambitions of the USA were broader, consisting of integrating the Black Sea area within a regional space including the entire south-east Europe; a veritable bulwark of defence on its eastern flank situated on the borders of the Russian Confederation. Nevertheless, the project was severely curtailed by various factors, such as the enduring instability of the Balkan area, the weakening of the European project and the new protagonism of Turkey and Russia. Two actors who, in the last fifteen years, made their influence keenly felt by embarking on forms of collaboration in some areas and sectors. In this regard, it is thought that the acquisition by Ankara of the Russian S-400 air defence system creates a number of problems for the USA and the Atlantic Alliance. 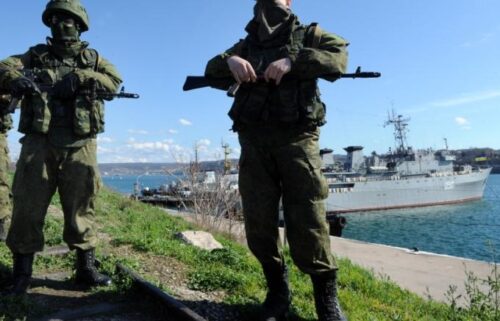 In particular, Russia, by annexing Crimea in 2014, considerably consolidated its presence in the area, creating new security challenges and compelling NATO to review its strategies which in this phase are shown to be increasingly contradictory, also due to the attitude adopted by Turkey. This situation, to which we must add the constraints of the Convention of Montreux – which imposes definite limits on the presence of military vessels of non-littoral countries which, in peacetime, may not exceed 21 days and with a fleet of not more than 40,000 tons – is making this area the Achilles heel of NATO since the poor cohesion among the allies leads all the littoral countries to act independently. To the contrary, the Convention of Montreux, affecting Russia to a lesser degree, even if it imposes limits (less severe since Russia is a littoral country) to the expansion of its military extension into the Mediterranean, represents a guarantee of its own security. In the meantime, despite historical precedents also regarding the question of pacts between Russia and Turkey, at present there is a convergence of interests aimed at reducing USA pressure on its vital maritime spaces. (F.R.)