Grand Zimbabwe is one of Africa’s largest and most complex archaeological sites. Its origins and decline are mysterious,
and we visited it.

The origins of Grand Zimbabwe – Dzimba-Dzemabwe in the Shona language: The Stone City – date back to 800 AD. That’s when, in the last great Bantu migration, Black African populations descended from what is present-day Zambia to the areas beyond the Zambezi River, settling in the plains at the foot of the eastern highlands, which is now south-eastern Zimbabwe. Previously, only the San ethnic populations (the Bushmen) inhabited the area.A small group of Bantu chose to settle in the ideal conditions along the banks of the Mutirikwe River. And their choice would prove to be accurate. 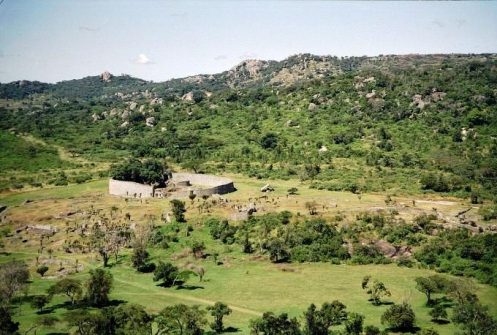 The water course was navigable. And it was a tributary of the Save river, for hundreds and hundreds of kilometers, served as the only river route that crossed the great Chimanimani mountain range – a natural barrier between the inland and the Indian Ocean coastline. It was along this water highway that Arab merchants based in Sofala reached the hinterland, encountering the Bantu peoples of Grand Zimbabwe and establishing a profitable trade network.
Towards the end of the ninth century, nearly twenty thousand people lived in the city, and hundreds of villages and communities revolved around what became an important centre for trade.

A Granite Heart
Grand Zimbabwe was built using square and locally hewn granite blocks from the surrounding hills and from the Matabeleland. These were cut and laid dry on top of each other. The oldest nucleus is now known as the Acropolis, located on the granite hill overlooking the esplanade. That’s where the the sovereign resided. Centuries later the large enclosure (now known as The Great Enclosure, or ‘Imba Huru’), the most famous complex in the city, was erected. 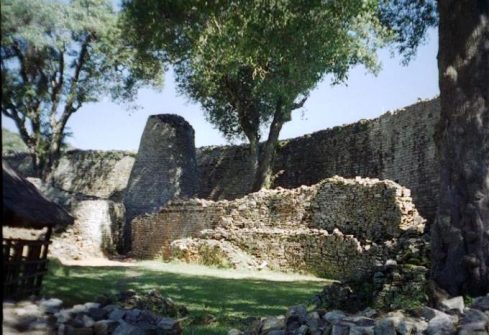 It consists of an elliptical enclosure of cyclopean walls, in the interior of which  stands the famous Conical Tower, built in a shape resembling a truncated cone; it may have been a a symbol of fertility, reminiscent of a phallic form . Or it could have functioned as a granary. Visitors to the site can still notice decorative motifs on the upper parts of the walls, produced using the laying of the blocks and believed to represent the City’s social organization, the power of the sovereign, and an invocation for fertility.The older wives of the sovereign lived in Imba Huru, where religious ceremonies were also officiated.
The priests studied astronomy, as the stelae located within the enclosure, depicting various astral constellations, show. 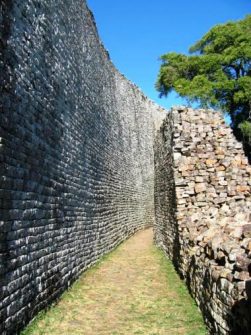 Moreover, the very shape of the walls, their dimensions and their relations with the Pi, the constant used to calculate the area of a circle symbolized by Greek letter Pi, betray the priests possessed deep mathematical insights. Perhaps, the Arabs, who made regular visits to the settlement, transmitted this knowledge. Beyond the southern gate there is a third complex, known as “The Valley” and it consists of a series of stone houses, probably inhabited by dignitaries and priests.

A Mysterious End
The civilization thrived for more than five hundred years. Then, around 1500, it mysteriously disappeared within less than half a century. Nobody knows exactly why the inhabitants abandoned the site. A prolonged period of drought and famine, an epidemic, or an economic crisis linked to a decline of the gold trade could have been responsible, forcing the inhabitants to move away. Moreover, archaeologists suggest migrations from the north overwhelmed both the Grand Zimbabwe (and the empire it controlled) on several occasions. Today, only the ruins of the majestic civilization that once thrived in the region are visible. They are located just a few kilometers from Masvingo, down the valley, where the ‘Great Enclosure’ and its conical tower stand against the ‘Acropolis’.

Stone Symbols
Without realizing it, as you walk through the alleys and the steps you shift from the granite construction of the Hill to an area of masonry buildings, where terraces, steps, squares and ramparts merge. Here the natural and the artificial coexist in perfect harmony. That which existed before the City (the granite area) was not demolished, or cut, but the city itself was integrated with it. It is a metaphor for African culture, in which the old is a heritage to be preserved and not a burden to be discarded. 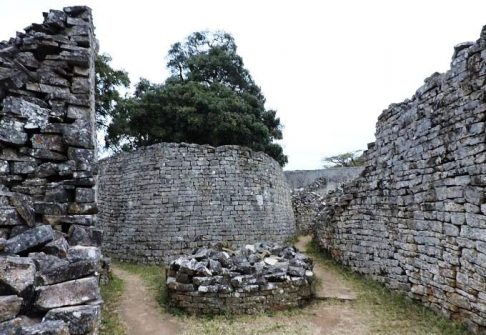 In Grand Zimbabwe, in the small museum at the foot of the Acropolis, visitors can observe seven of the eight so-called ‘Zimbabwe birds’ or ‘Zimbabwe hawks’, a series of stele carved in soapstone representing the howling eagle or the juggling hawk. Both are thought to link the world of the living with that of the ancestors. These were probably placed on the top of the Acropolis walls. Each of these commemorates a new ruler, and the image of the last hawk recurs in national iconography from the period when thr country was known as Rhodesia to the present. They appear on flags, banknotes, coats of arms and friezes. And the ruling political Party, Zanu-Pf, has adopted the conical tower, on whose sides two tall trees have grown, as a symbol.

Contested Origins
Adam Render, a German hunter, was the first European to discover the ruins of Grand Zimbabwe. He told his friend Karl Mauch, an explorer and geographer, and they visited the site together. They took credit for the discovery attributing the site’s origins to King Solomon. For a long time, it was believed that Phoenician populations, who managed to reach southern Africa, built Grand Zimbabwe. 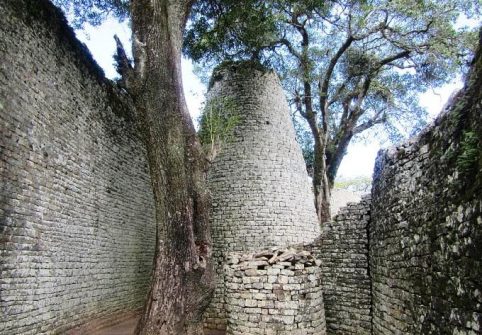 Cecil John Rhodes was the first to understand the political significance of the ruins: attruibuting the erection of the City to black African populations would have falsified the notion that Africans were culturally inferior to whites. Thus, the Phoenician origin of the site would remain in vogue until 1905, when the archaeologist David Randall Maclver established, after careful study, that there were no signs of European or Near Eastern influence to be observed at Grand Zimbabwe.
However, the authenticity of the existence of a purely African medieval archaeological site was censored until the late 1970s. When Rhodesian archaeologist Peter Garlake definitively established Grand Zimbabwe’s African origins, he was forced into exile.
Weeks would fail to provide enough time to talk about the mysterious Lost City, whose thousands of corners and millenary walls seem to whisper history while the massive granite boulders appear to guard its secrets. In 1986, UNESCO included the archaeological site of Grand Zimbabwe in its list of World Heritage Sites. (S.T.)