On his knees before President Salva Kiir and the Vice-Presidents Designate who are to open a new government this month of May: “Peace is possible, let the armistice be respected. The people are worn out by past conflicts”.

With some difficulty, he bent down before the political leaders of Sudan and kissed their feet. Pope Francis, concluding a spiritual retreat for peace in that tormented region of Africa, humbly bowed to the ground before Salva Kiir Mayardit, President of the Republic and the Vice-Presidents Designate  Riek Machar Teny Dhurgon, Taban Deng Gai and Rebecca Nyandeng De Mabio, widow of the former leader of Sudan, John Garang. He then presented them with a Bible signed by him, the Archbishop of Canterbury and Primate of the Anglican Communion Justin Welby, who ardently desired the meeting should take place, and by Reverend John Chalmers, former Moderator of the Presbyterian Church of Scotland. The Bible was inscribed with the message: ‘Seek what unites. Overcome what divides’. 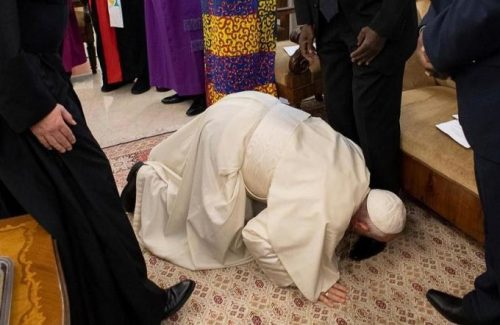 Addressing the leaders of South Sudan, Pope Francis said: “You have begun a process – with reference to the 17th peace agreement that will come into force on 12 May – and I therefore appeal to you to seek what unites you, starting from your belonging to a single people, and to overcome what divides. The people have become tired and worn out by past wars: please, remember that, with war, you lose everything! Your people are now longing for a better future brought about through reconciliation and peace. It was with great hope that, last September, I learned that the political representatives of South Sudan had reached a peace agreement. I therefore congratulate the signatories of that document, both those here present and those who are absent, excluding no one and, first of all, the President of the Republic and heads of the political parties for having chosen the path of dialogue, for their readiness to be reconciled and for their desire to implement what was agreed upon. It is my heartfelt wish that hostilities may cease for good, that the armistice be respected! – that political and ethnic differences be overcome and that the peace should last, for the common good of all the citizens who dream of starting to build up their country”. 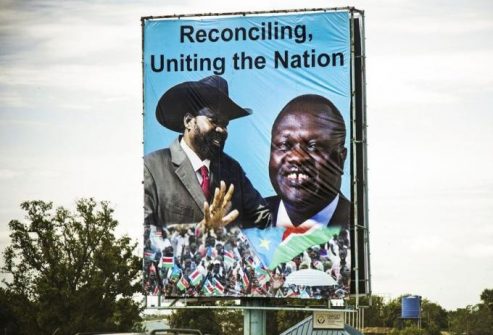 In conclusion, the Pope emphasised: “As your brother, I ask the three of you, who have signed the peace agreement, to keep the peace. I ask this from the bottom of my heart. Let us forge ahead. There will be many problems but do not be afraid, but solve the problems. You have started a process: may it end well. Yes, you two may fight among yourselves. Do this inside your offices but join hands before the people. In this way, from being mere citizens, you will become Fathers of the Nation. Please allow me to ask this of you with my most heartfelt sentiments”.
The address by Pope Francis and his final blessing took place after two days of spiritual retreat held at Saint Martha House (10 -11 April). 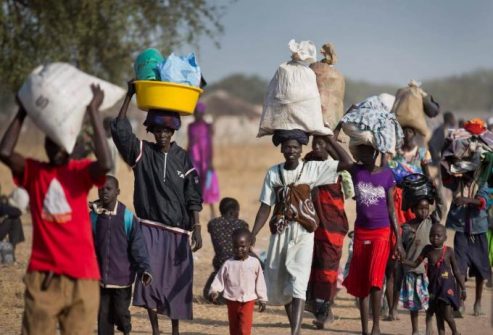 The Pope repeated his desire to go to the country together with the Archbishop of Canterbury and mentioned, “the dear people who have lost their loved ones and their homes, the families that were broken up and never reunited, all the children and elderly people, the women and men who suffer so much due to the conflict and violence that have sown death, hunger, sorrow and weeping”. Appealing for peace, he remarked that “we have clearly heard the cry of the poor and the needy, it reaches up to heaven, right to the heart of God the Father who wants to give them justice and the gift of peace. I think constantly of those suffering people and I implore that the fire of war be extinguished for good, so that they may return to their homes and live in serenity. I supplicate God Almighty that peace may come to your land and I also turn to all people of good will so that peace may come to your people”. 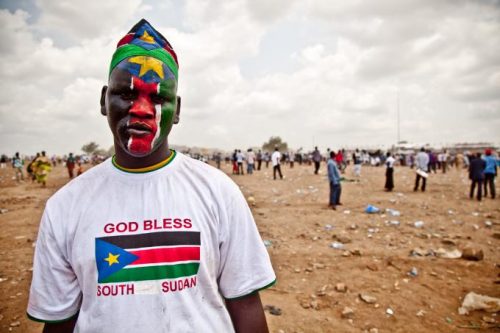 South Sudan, having won independence from Sudan in 2011, saw, in December 2013, the outbreak of ethnic conflict between the government forces of the President, an ethnic Dinka and those of the former Vice-President Machar, an ethnic Nuer, which caused more than 400,000 deaths and more than four million homeless. With the Revitalised Agreement on the Resolution of Conflict in South Sudan (R-ARCSS), signed last September, and which comes into force on 12 May, a new transition executive will be formed including representatives of both parties to the conflict. Together with President Kiir and Vice-President Machar, there will also be four other Vice-Presidents representing four  ethnic groups. (S.N.)