The Warao indigenous people inhabit the states of Bolívar, Monagas, Sucre and Delta Amacuro in the eastern part of Venezuela. The majority of them lives on the banks of the Orinoco River in the Delta Amacuro. This tribe, which is currently estimated to number about 50000, is the second-largest indigenous group in Venezuela,
after the Wayuu.

‘Warao’ is a name made up of two words: ‘Wa’ that comes from curiara, which means boat or canoe (this group’s main form of transportation) and ‘Rao’ meaning people or owners, hence the meaning of the word ‘Warao’, ‘owners or people of the curiaras’. The Warao have lived for centuries on the Orinoco Delta.
According to Warao mythology, in pre-cultural times the Warao lived in the sky, where a young archer ‘s shot went wide one day. While searching for his arrow, the archer, whose name was ‘Jara Yakera’ (Good Arm), found a hole and looked through. He saw lush and fertile land (Earth) and descending by a rope to the earth, he discovered an abundance of food. On his return he informed the Warao of his extraordinary find. The other Warao immediately decided to descend to Earth and live there, forsaking their sky world. 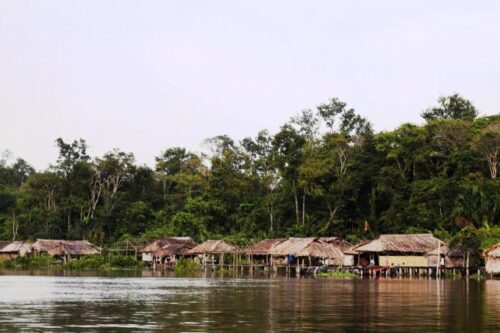 The Warao of the Orinoco Delta refer to Kanobo (‘great father’) as the author of life and their protector, and ‘Kanobo arima’ is the name of the Wisidatu, a spiritual guide and the intermediary between Kanobo and the members of the community. Festivals are celebrated in honour of Kanobo by this indigenous group; during these ceremonies offerings such as yuruma (aru) and wina are made to the god and Jabisanuka and Najanamu (sacred dances) are performed in order to maintain good relations with the god and to be saved from diseases.
Kanobo communicates through dreams with the Kanobo arima. The ‘yuruma‘ offered to Kanobo is prepared only by those women who already went through menopause, since the Warao believe that women experiencing menstruation may contaminate the yuruma and makes it impure. When the yuruma is ready, the Wisidatu puts it into a container which is placed under the altar dedicated to Kanobo. 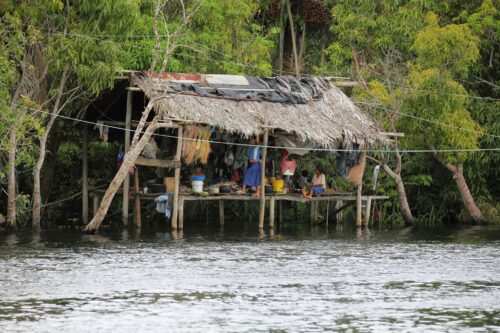 On the day of the offerings the Kanobo arima invites other Wisidatus and they gather at the Kanobo’s temple where the ceremony is held. Before starting, the Kanobo arima smokes and invokes Kanobo and the spirits of other Wisidatus, and then the intercession for the community starts. Later the sacred dances Najanamu and Jabisanuka are performed.
Young or menstruating women cannot participate in the dance because they might contaminate the dance and make it impure, and that may cause Kanobo‘s anger and bring diseases among the members
of the community.
The dances that are performed in honour of Kanobo are considered sacred by the Warao, and they respect the different rules that these require. For instance, the different instruments used for the music that accompanies these sacred dances are used only for this purpose and are kept in a special container (torotoro). They can be only used by the wise men and the community elders, who are the healers and protectors
of the community members. 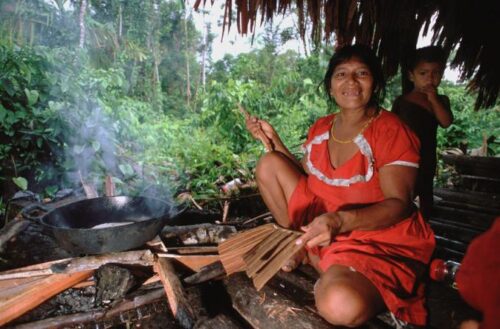 The Warao indigenous people believe that everything in nature has spirit, so there is a lot of respect for the jungle, the mountains, the stones which are believed to have spirit called maisikiri, Jobaji arao or other names. Therefore, the spirits of trees, rivers, those of the jungle,
are all greatly respected.
The elderly and wise men of the community are also very respected because they are the preservers of the community’s ancestral culture and the owners of wisdom. The Wisidatu is a shaman that plays an essential role in the community; he is the intermediary between Kanobo and the community, he communicates with spirits, and is believed to be able to expel the evil spirits from the body of people. Some Wisidatus cure mainly the spirit of a person, while some others cure physical diseases. 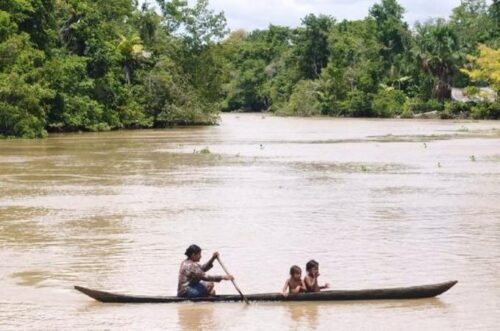 Maintaining good relationship with spirits is important to the Warao people. There are rules that must be respected in order not to make spirits angry. For instance, before cutting a tree, the spirit of the tree should be asked for permission. Or when a new curiara is made, people must remember that they are not supposed to let a lady with menstruation board the boat, because the boat would be contaminated and become impure and the spirit of wisdom (‘moyotu‘) would get angry. In the same way, the Warao people ask the spirit of the jungle for permission before cutting down trees to make room for sowing crops in order to obtain food. The wisdom of a people derives from their knowledge and traditions and the Warao communities are living examples of indigenous people who care, respect and protect their territories and the environment.