African cuisine offers a wide range of dishes of great flavour and variety. Food is an occasion for gathering together, for celebrating and sharing. A short culinary journey across the continent.

The famous couscous, a dough made with hard grain or millet, semolina and rice, flavoured with butter and served with sheep, chicken or fish meat, is widespread throughout the Maghreb area and in some West African countries. Couscous-based dishes are always served with the harissa sauce, a mixture of herbs, spicy paprika and other spices. Couscous can often be accompanied by a special soup of legumes, cereals, meat or fish, known under different names in different countries: tchorba, in Algeria; brudu, in Tunisia; molokheya, in Egypt; harira, in Morocco.
Another popular dish in this region is tajines, stews of meat and vegetables seasoned with sauce made with vegetables and spices. Chicken stews with cinnamon and onion are very popular in Algeria, while those of lamb with honey and peach are typical of Morocco. 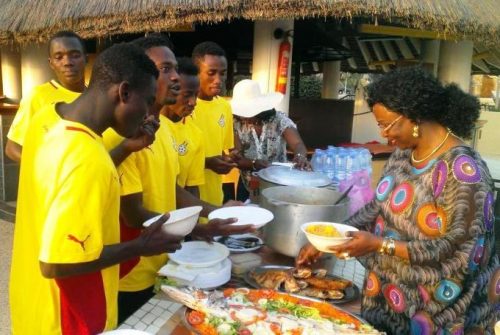 The culinary tradition of West Africa is based on products such as cassava, millet, spices and the abundant use of paprika, which in some places is called pili-pili. Maffe ‘el, a typical dish of Mali, consisting in minced meat with vegetables and peanut sauce, is widespread throughout the region.
Tieboudienne is the Senegalese national dish, a flavoured combination of fish, rice, and vegetables. While yassa, lemony chicken and caramelized onions in a sweet-spicy-lemony sauce served with boiled rice, is typical of Senegal, Ivory Coast, Burkina Faso and Mali. Boarake is another popular fish-based dish with cassava leaf and palm oil.
Couscous is also typical of Cameroon where the dough is mainly made of corn and served with fish sauce. Tô, a millet, sorghum or corn paste is very common in some regions of Burkina Faso, Mali and northern Togo and is often served with local sauces.
Mutsella, a dish consisting of fish with vegetables and spices, and yekumé, spicy chicken, are typical Togolese dishes. 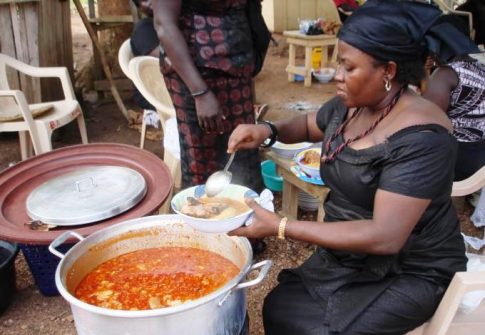 Cassava is the staple food of Central Africa. It is left to ferment and then ground into flour. Boiled water is added to the flour which is kneaded into a compact dough. Cassava is usually accompanied by vegetables, seasoned with oil, tomato sauce and onions. Fufu is also a staple food in several African countries such as Inizio modulothe Democratic Republic of the Congo, where it usually accompanies pondu, a vegetable dish made with cassava leaves and palm oil.
Eating mushrooms and almonds, as well as insects such as caterpillars, termites and worms is very common in the Central African Republic. Insects have a high protein value and can be consumed raw, after being soaked in salt water and sun- dried.
African people from rural areas also consume monkeys, gazelles, antelopes and boars.
Some oriental influence is evident in many traditional dishes of the countries of the coastal region of East Africa, mainly Kenya, Tanzania, South Africa and Madagascar, which are enriched with sauces and spices imported from India, China and Arabia. Sukuma wiki is a traditional Kenyan dish that is prepared with meat, vegetables and typically served with ugali which is a ball of corn cooked in boiling water to a stiff or firm dough-like consistency. Ugali is also consumed with maziwamala (sour milk) and is one of the most common staple foods throughout East Africa. It is called shima  in Mozambique and Zambia, and  usua in the southern area of Mozambique and Swaziland. One of the most common appetizers in this region is sambusa, triangular fried pastries stuffed with minced and flavoured meat. 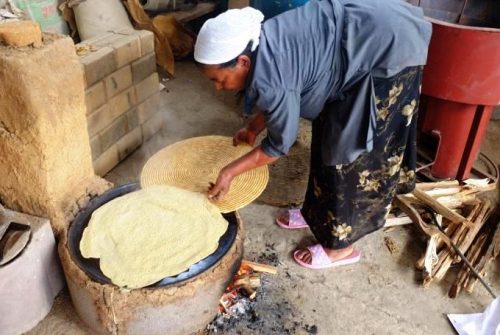 Injera is a traditional Ethiopian sour, spongy, flat bread made with teff flour. Teff is a cereal that is grown almost exclusively in Ethiopia. According to historians, it began to be cultivated around 4,000 BC. Teff flour is mixed with water and left to ferment for three or four days. The liquid amount of flour is then ready to be poured into a large clay plate and cooked over a fire. A very large spongy crepe-like bread is created. Injera is almost never eaten by itself. The large flat bread is placed on the table and other food, such as vegetables, potatoes, tomatoes, beans, peppers and stews of chicken, lamb or cow meat, are placed on top of it. These are served with a spicy sauce known as berberé, a spicy mixture whose ingredients include spicy paprika and other spices and herbs. Injera becomes the plate, the eating utensil, and the food. Pieces of injera are ripped off the main piece of bread and used to pick up the other foods; the injera soaks up the juices and flavours from the food placed upon it. Injera lamb is one of the most appreciated and is usually consumed on occasions of special celebrations.