Despite the bloody repression of the pro-democracy marches organised by roman catholic organizations and the profanation of churches on the last 31 December, the number of demonstrators was even larger on the 21 following January. And they are increasingly joined by other christians and moslems.

At least 12 people were killed by the police and the military on the 31 December, according to the Catholic Secular Coordination Committee (CLC) during the demonstrations it organised throughout the country on that day. They were calling for the resignation of President Joseph Kabila, whose mandate expired on the 19 December 2016 and for free and fair election before end 2018, without his participation since the constitution does not allow the incumbent to run for a third mandate. According to the U.N., at least six people also died on the following 21 January. 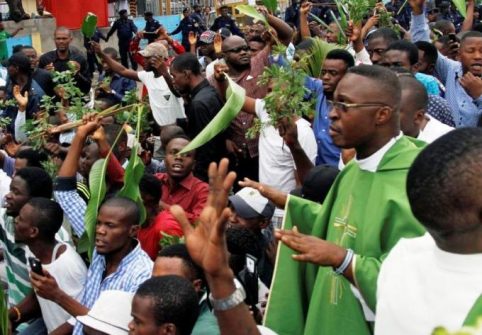 From the start, the authorities were prepared for the clash. On the dawn of the 31 December, the premises of 134 parishes were besieged by the army and police. Five masses were interrupted by the police who used teargases against the faithful. In some of them, the police and the military shot with real bullets on faithful who were praying, holding rosaries and crucifixes. At the end of that day, 88 arrests were reported in Kinshasa and Kananga, including six priests and altar boys. The authorities justified the repression, arguing without providing evidence that the demonstrations were part of a «terrorist plot». 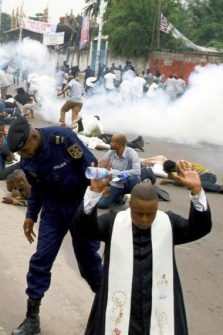 Three weeks later, about a thousand faithful who were praying on their knees, near the Notre Dame du Congo cathedral were shot at by National Legion of Intervention policemen, told SouthWorld a UN source who saw several bodies lying on the ground. In the Bandalungwa populous area of Kinshasa, Kabila’s Republican guards arrested hundred people including priests fromt the St Christophe parish and tore their clerical clothings. The mobilisation was strong as well in the provinces, namely in Kisangani.
One of the keys of the success of the mobilisation is that it came as a new hope after the loss of impetus of earlier protests which had been organised bythe pro-democracy youth movements Lucha and Filimbi.
At the beginning, the regime had been caught by surprise, but then it clamped down on these activists, arresting some and disrupting internet connectivity which was crucial to coordinate the protestors’ movements.
Since the death of its charismatic leader, Etienne Tshisekedi on the 1st February 2017 in Brussels, the political opposition attempts to organize stay away protests were not successful, partly because of its divisions. 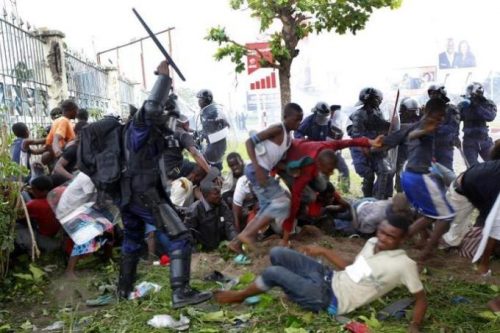 The trigger of the mobilization of roman catholic secular organisations such as the CLC, was Kabila’s refusal to abide by the agreement sealed on the 31 December 2016, between his supporters and the political opposition, under the aegis of the Congo’s National Episcopal Conference (CENCO), for a transition to the elections before end 2017. Besides, many Congolese think that if the CLC managed to mobilize huge crowds, it is because the Roman Catholic Church which gathers more than half of the Congolese population, is one the last institution which Congolese do still trust.
Its clinics and schools are much appreciated in a country where public health and education are in shambles. Through its various structures, such as the Justice and Peace Commission, the Church is one of the few entities which still dares to speak against human rights violations, and the plunder of natural resources by transnationals by the complicity of the local elite. In 2011, CENCO with its 3,000 observers on the ground, was instrumental to expose the massive fraud of the presidential and parliament elections. 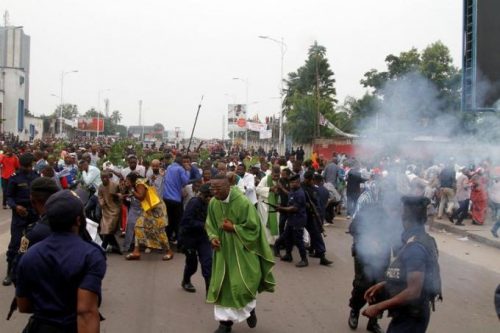 Elders remember as well that the Roman Catholic Church was the main focus of resistance during Mobutu’s dictatorship. At the beginning of the 1970s Cardinal Joseph Malula opposed Mobutu’s so-called authenticity policies which forced his compatriots to abandon their christian names. In 1990, roman catholic bishops plaid an instrumental role during the transition from the one party state to pluralism. The then bishop of Kisangani, Mgr Laurent Monsengwo Pasinyia, who is now archbishop of Kinshasa and cardinal, chaired the National Sovereign Conference which led the path to democratization. Mobutu’s attempt to stop the momentum by closing the Conference, led to the Christians’ March of the 16 February 1992. which was brutally repressed. by Mobutu’s police. The death toll was estimated at 49 by Médecins Sans Frontières.
Twenty six years later, the mobilisation continues. On the 2 January, Cardinal Monsengwo condemned the «police brutality,” and likened its victims to the martyrs of the country’s independence. “It’s time that truth won out over systematic lies, that mediocre figures stand down and that peace and justice reign in DRC,” he declared. The CLC called for « resistance and perseverance » while every thursday evening, throughout the country, priests ring the bells to demand the respect of the 31 December agreement and Joseph Kabila’s departure. 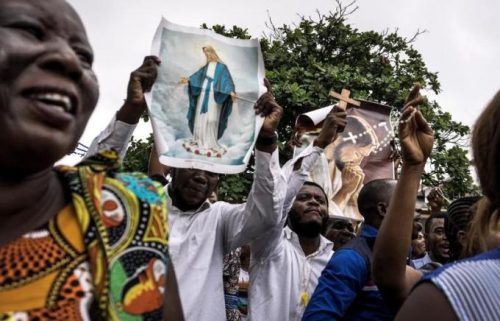 Other christians are increasingly joining the protests. On the 31 December, members of the protestant and kimbanguist churches could be seen among the demonstrators. On the 20 January, the Congolese Islamic Community leader, cheikh Ali Mwinyi N’Kuu urged the authorities to avoid to repress the roman catholic marches.
But the reaction of the regime has only been to intensify the intimidations of church leaders. On the 31 January, at 5 am, security guards found a suspect military in the premises of the Kinshasa archbishop’s residence. This context prompted the Vatican to appoint the chairman of the Justice and Peace Commission, Mgr Fridolin Ambongo as coadjutor bishop to assist 78 year old Mgr Monsengwo who is particularly targeted by the regime. Priests speak of a climate of fear and intimidations by the ANR state security. On the 4 February a Kinshasa priest was kidnapped then released by unidentified men after the mass. Three days later, the protestant Church of Christ in the Congo released a communiqué expressing concern for Rev François Ekofo’s disappeance since the 4 February. Rev. Ekofo who is the chaplain of the Presidential family, had urged Kabila to step down in a sermon on the 16 January. He was living in clandestinity since that day. There is still a long way to go before the churches manage to lead the flock to the promised of democracy.