They are seers and traditional healers with a vast knowledge of medicinal plants, spells and fetishes. They represent an example of moral integrity. Today they enjoy a high position in Malinke society, especially in the rural environment.

African societies have always lived in a close relationship with the world of visible powers and that of invisible powers, between what is real and what is supernatural.   The men that act as intermediaries between these two worlds are considered the custodians of the traditions and pillars of society and are therefore greatly respected. Of these, among the Malinke Bambara peoples of West Africa, the confraternity of the Donso hunters, the guardians of animist rites, is one of the oldest traditional organisations untouched by time and still today present and recognisable in the entire Madinga area of cultural influence, from Mali and Burkina Faso to Liberia and the Gold Coast. 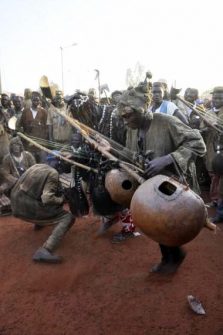 The word Donso comes from ‘don’ (to know) and ‘so’ (house), and means ‘the house of knowledge, the one who possesses knowledge’. Traditional society honoured them for their courage in confronting the fiercest of animals and for penetrating the most hostile forests. However, their basic vocation is to protect society from visible and invisible enemies. They are traditional seers and healers with a vast knowledge of medicinal plants, spells and fetishes.
The Donso are grouped in confraternities that are more or less secret and ‘democratic’ societies since they are open to all social classes from the nobility to the low castes, with members who may be important functionaries, small traders, smiths or farmers.
To become a Donso it is necessary, first of all, to undergo initiation with a teacher. The candidates must accompany their request with cola nuts and chickens. Once approved by the fetishes, the applicant must take a ritual bath that consecrates him as a Donso pupil, coming under the responsibility of the teacher to whom he owes unconditional obedience.
The education received includes a technical part directly related to the knowledge of medicinal plants but the moral and religious part is essential. Even though, on the one hand, being a Donso confers on the individual great knowledge regarding many aspects of life – from the art of hunting to natural medicine, cosmogony and, according to legend, to mystical powers, among which is the gift of ubiquity and invulnerability to projectiles – on the other, it implies respecting a moral and social code of conduct. Being a Donso implies being an example of moral integrity, having a deep sense of honour, dignity, loyalty and humility. 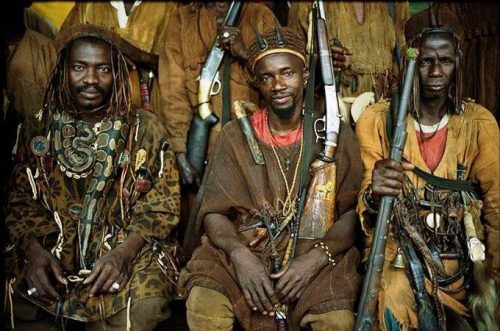 The presence of this group is recorded for the first time in the Late Middle Ages, during the epoch of the great Mandingo Empire. According to oral tradition, the existence of its confraternities owes its origin to two mythical brothers, Sanin and Kontron. The legend states that, driven by thirst among the ruins of the Ghana Empire, two young hunters killed a new-born child to gain possession of the water of its  mother. Punished by God with death, they were resurrected and, having repented, they swore to be pure and chaste. As the ancestors of the hunters with great knowledge of the secrets of the forests, Sanin and Kontron belong to no particular clan and are known for their purity and chastity (from ‘saniya’, the purity of gold).
The head of each confraternity is a teacher; it is he who minds the altar on which ritual sacrifices are offered for protection and a successful hunt. He also administers the hunting territory and guards the fetish. The Donso are easily known by their clothing: they wear a dark brown tunic with leather fringes and decorated with geometrical signs and amulets, with a round and stiff hat made of large woven threads and decorated with mirrors and pompoms, hunting trophies, warthog teeth, lion claws and gazelle horns. He will always have a rifle on his shoulder and a fly whisk of cow or horse hair in his hand. 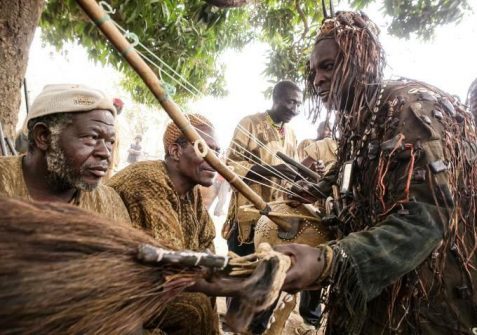 The present evolution of their environment is closely bound up with the socio-economic changes in contemporary society. Regional conflicts and migrations help to create local tensions also due to ignorance of local traditions and customs. Urbanisation and deforestation have reduced the great hunting grounds causing the hunt to become today a mostly religious activity for the protection of the environment rather than an economic pursuit. The Donso confraternities, having survived the slave trade, the influence of Islam and colonisation, today enjoy enormous prestige in Malinke society, especially in the rural context. All over the Sahel, it is possible to see the meetings, parades, songs and dances of the Donso, during somewhat ostentatious cults and rituals. They are a very important element of the contemporary identity of Western Africa and there are many Africans who see in them the guardians of ancient mystical knowledge, according to an uninterrupted centuries-long tradition.