A soccer championship is useful in order to keep hundreds of young people of the Baka ethnic group in Cameroon far away from alcohol consumption.

The sun is going down in the town of Mintom, in southern Cameroon, one of the regions of Central Africa with the highest concentration of pygmy population.
The sky is turning orange and red and dozens of boys and girls have come together to play several simultaneous games, sharing a small soccer field next to the town’s Primary School.
The first day of the Baka Alcohol Free Championship has just ended, a football tournament that serves as a background for a project that aims to young people of the Baka Pygmy ethnicity to the dangers of alcohol consumption and offer them a healthy alternative for their leisure time. 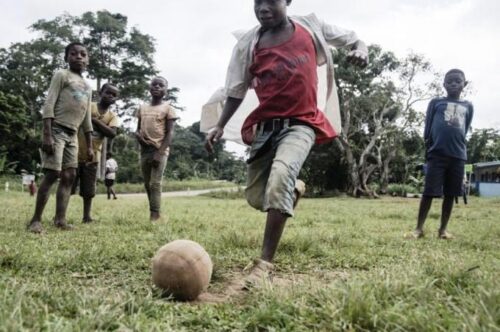 Alcohol has become a serious problem among young Baka people. And even more serious since, a few years ago, small plastic bags containing 5 ml doses of whiskey, gin or vodka popped up on the market. Their low price, equivalent to € 0.15 per dose, makes them very accessible and widely used among the members of this community, who have replaced their traditional drinks with alcohol in sachets.
In 2014, the Cameroonian Government passed a law prohibiting the importation, production and sale of alcohol sachets as they contributed to serious health problems. The reasons for the ban followed the observation that the drink contained in sachets was not produced according to norms, as producers were using methanol instead of ethanol, hence the alcoholic content was very high and detrimental to the human system, causing even death due to respiratory failure. The Cameroonian Government’s decision included a moratorium of 24 months (which would expire on 12 September 2016), in order to enable the distillers sell their old stocks and ensure their production too should comply with the new standard. 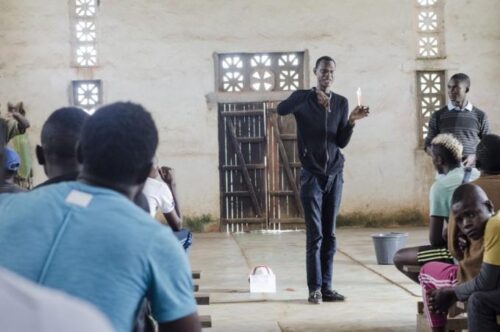 But the reality is that the sale of alcohol sachets on the street has not stopped. “The government knows who produces the alcohol sachets and where they are sold, but  it does nothing to prevent it”, says a local seller, adding that “in practice, after the ban, nothing has changed”.
The production of affordable alcohol in sachets was well received in Cameroon, since it opened to many the consumption of a product until then reserved to those who had the means to afford it. Its availability and cheap nature often led to carefree intake. The consumption of these products became a real social scourge, a danger to the population’s health especially among young Baka people, who, by drinking, find an accessible way to escape from reality and forget their problems. This high consumption of alcohol leads them, in many cases, to suffer serious health problems, school drop-out, or unwanted pregnancies.
Alcohol addiction also reduces their ambition to improve their personal and collective situation. 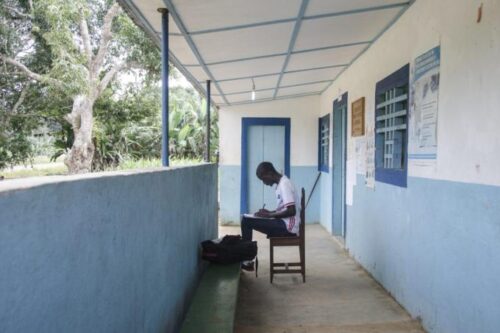 However, “Football has become a catalyst, a way to reach young people and raise awareness of how harmful alcohol can be in their lives”, says Hippolyte Akono, president of the organizing committee, head of the NGO Near and Far and promoter of the Baka Alcohol Free Championship. “Thanks to football we have been able to get in touch with this sector of the population, which is usually very difficult to  reach”.
For a week, 120 boys and girls from different villages in the region, divided into eight teams, participate in the tournament, which this year celebrates its fifth edition. The objective is to be able to carry out an in-depth work with young people by analysing the causes and consequences of alcohol consumption. This is done in a sports setting characterized by the experience of living with other ethnic groups and the sense of sharing and participation. 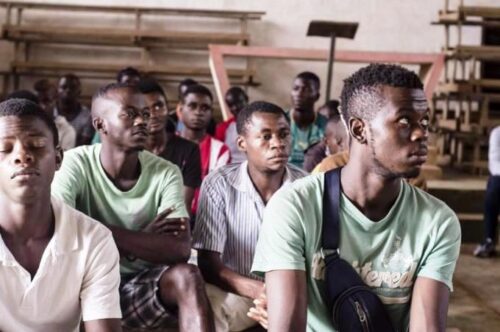 In the mornings, soccer players attend conferences and workshops in which various topics regarding the promotion of health and the problems caused by alcoholism are discussed, and in the afternoon, girls’ and boys’ teams participate in the soccer competition. For years, this tournament has become a benchmark in the area, and hundreds of people attend the event, singing and dancing to cheer their teams.
“Things are changing little by little”, says Mirabelle Assampele, player of the Ax-Dja team, “in the first edition you could see the spectators themselves consuming alcohol while watching the games. Today everyone is sober and enjoying football matches”.
The championship, after the first two editions, has started to draw the attention of local authorities and the country’s media to the Baka community and their young people’s consumption of alcohol, a reality that was unknown in the large cities of Cameroon.
“Quitting drinking alcohol has been one of the most important decisions of my life”, says Romeo Kombo, player of Ax-Congo, who has participated in all previous editions, “I can work better and be more helpful for my family now, and besides, I have stopped being a troublemaker at home”. For several years now, Romeo has been working to help young people in Akom, his hometown, to give up alcohol and fight to build a better future for the young people of the Baka group. He adds smiling, “The situation will change, if we carry on with our initiative: promoting healthy leisure activities as an alternative to drinking”.