Touba, the holy city of the Muridiyya Brotherhood, situated in the centre of the country, though a religious city, stands out for its commercial character which comes from the popular motto of Sheikh Ahmadou Bamba, founder of the city and of the Mourides: “Pray as if you were to die tomorrow and work as if you were to live forever”. Prayer as a means of coming close to God and gaining Paradise and work as a means to satisfying material needs: this is the life in which Sheikh Ahmadou Bamba educated his disciples.

Touba, founded in 1888, rises at the intersection of the three historical Wolof kingdoms of Cayor, Baol and Yolof, about 200 kilometres to the east of Dakar. It is said that Ahmadou Bamba wanted to create his brotherhood on that spot, just seven kilometres from his native village of Mbacké Baol, following a vision.
It was in 1883 that thirty-year-old Sheikh Amadou Bamba made a pact of fidelity with the Prophet who appeared to him and ordered him to guide his disciples on the right Way to God. It was at that point that this great man of culture and strict orthodoxy claimed independence from the Qadiri Brotherhood, whose wird he practised, to create his own: this is how the Muridiyya (from the Arabic mourid, ‘disciple’) at Mbacke Cayor, in the Senegalese hinterland north-east of Dakar came about. 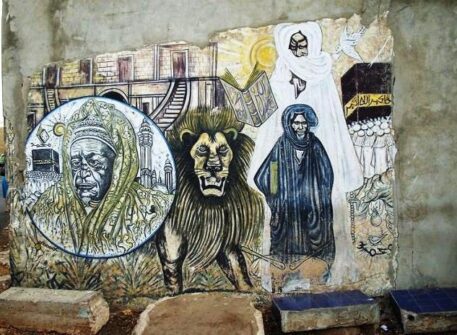 Senegal. Mural on a wall in Dakar showing leaders of the Mouride, including Ahmadu Bamba (right, in white) and Ibrahima Fall (right, blue), and El Hadj Malick Sy (left), or Mouhamadou Fadilou Mbacké.

Sheikh Amadou Bamba created a number of villages in the heart of the same region before founding Touba, where the largest mosque in Sub-Saharan Africa was built with the contributions of all the talibés, especially those of the United States and Europe. Each year, millions of the faithful throng the city for the great mourid pilgrimage, the Great Magal.Well versed in the Koran, Amadou Bamba, known as Serigne Touba (Sheikh of Touba), composed more than seven and a half tons of writings in theology, Sufism, grammar, law and good etiquette: some of these he buried or threw into the sea so as not to reveal to others all the secrets gained from God, while another part is kept in the library of Touba located close to the mausoleum. Reading verses of these texts (khasidas) and part of the Koran is the foundation of the Mourid wird. 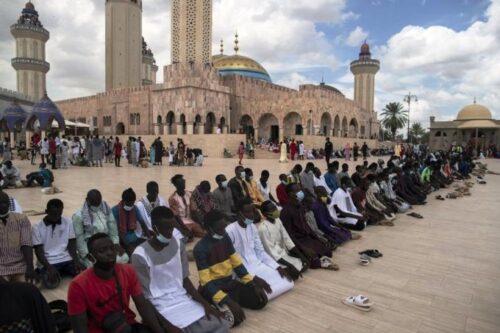 Consistent with the values of non-violence and forgiveness, Sheikh Amadou Bamba was known for his peaceful opposition to colonisation and to have survived, unlike all his religious predecessors, being abused and exiled by the French authorities. Both legendary anecdotes and factual evidence show what Sheikh Amadou Bamba had to endure during thirty years of persecution, combatting the colonialists by means of his faith alone. He never denied his faith even under threat of death when, in 1895, the French governor in Saint-Louis, the colonial capital in those days, convoked him and another 83 religious leaders, demanding that they abandon their faith. The only response Serigne Touba gave was to recite two series of Islamic prayers. To this day, in Saint-Louis, each year on 5 September a pilgrimage is held (the Magal of the two rakkas) to commemorate the event.
After several years’ exile in Gabon to which he had been condemned by the French governor, other exiles to the Congo and Mauritania and the guarded stays in Thieyene and Djourbel, the French gave in, recognised his qualities and raised Sheikh Amadou Bamba to the rank of Knight of the Legion of Honour. 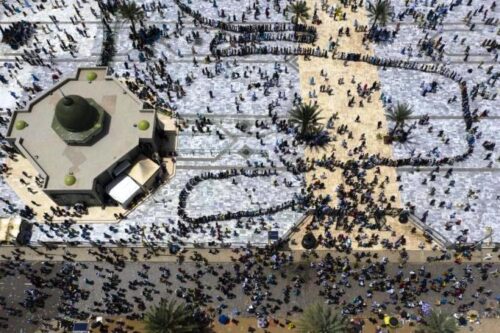 In this aerial photo, pilgrims from the Mouride Brotherhood arrive at the Grand Mosque of Touba during the celebrations of the Grand Magal of Touba, in Senegal, Oct. 6, 2020.

The preaching based on the values of peace in total submission to God and on ethics of work gave the Mourid faithful, who had rapidly grown in number through many conversions from the Tijani faith, the distinction of being the most active emigrants in the world and an economic power in the country. Apart from being the best known and most mediated brotherhood, it is also the most influential, politically speaking, because of the popularity of its many religious leaders who became so out of merit or because they are descendants of Sheikh Amadou Bamba. Being Marabouts, they, in their turn, obey the General Caliph of Touba. Since 2010, that post has been filled by Sheikh Sidy al Moukhtar Mbackè.
Recently, the General Caliph Al Moukhtar Mbackè invited the Moslem faithful to pray and recite the Sacred Koran for an end to the Coronavirus pandemic. In the edict, those Koranic schools with a large number of students are asked to complete the recitation of the entire Koran three times throughout the day while medium-sized schools were asked to recite the Sacred Book twice in one day. Small Koranic schools with just a few students were asked to do so once only.

The Baye Fall, Sufis, ‘The Heretics’
Ibrahima Fall was still young when a voice in a dream suggested he seek out Sheikh Amadou Bamba and dedicate himself entirely to him. Having left everything and travelled much, in 1884 this brilliant student of Islamic studies found his master. From then on, Ibrahima Fall would serve his guide devotedly through reverential submission, until Serigne Touba himself ordered him to withdraw and found his own community.
It was then that Bayefallism (in Wolof baay means, ‘father’) came into being, whose disciples, called Baye Fall, often gather around their Marabouts in genuine communities.
They do not know the meaning of intolerance and have no time for any form of fundamentalism. They make no distinctions based on race, religion, or colour. They are distinguished most for their respect for every human being and their outright pacifism. 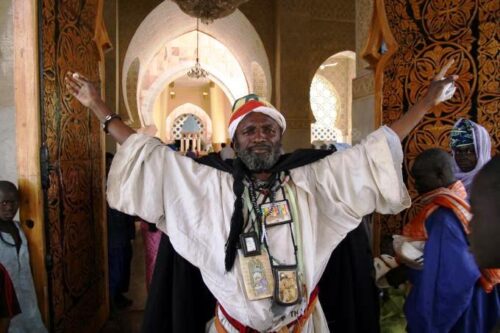 They esteem women as much as men: they do not demand they wear the veil and believe education must be equally available to all. They see themselves as totally Islamic. Sometimes criticised within the Senegalese Islamic community for their non-observance of two of the pillars of Islam (the Ramadan fast and praying five times a day); the Baye Fall have nevertheless accentuated the importance of the Zikr. Its repetition has given rise to nocturnal songs in which the talibé, marching in a circle around the drums, try to reach a state of trance. The Mecca Pilgrimage is substituted with that to the great mosque of Touba where the tomb of their founder Ahmadu Bamba is located.
The Baye Fall are proud of their culture and detest all external influence. They have a very strong sense of community.  Individual Baye Falls do not own material goods but place all they have at the disposal of the Marabout, the spiritual guide. 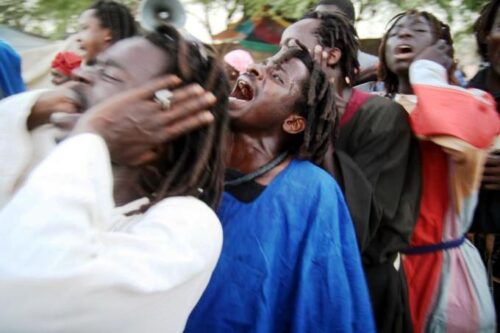 The Baye Fall have also instituted the Caliphate among the descendants of Sheikh Ibrahima Fall, based in Mbackè, at the gates of Touba, even though their Caliphs still submit to the General Caliph the Mourides.
Bayefallism presents itself as a real sub-culture, rich in symbolic elements: one can recognise a Baye Fall from their Rasta hairstyle, their ndiakhass (coloured patchwork) tunics, their thiaya (baggy trousers), large belts and black or brown woollen caps with pompoms.
Besides the Great Magal of Touba and the Magal of Saint-Louis, often during the year, there are smaller pilgrimages corresponding to the anniversaries of the deaths of the Caliphs who succeeded Sheikh Amadou Bamba (his children and nephews) and of his mother, Mariama Bousso, whose mausoleum is to be seen in Prokhane (close to Kaolack). In Djourbel it is possible to visit the homes of Sheikh Amadou Bamba and Sheikh Ibrahima Fall. (L.d.M.)