It began in an Islamic context as a religious dance but today it has a more secular character and is managed by the women of the Makua ethnic group who compose the words and music, singing and dancing. It is also an occasion of social liberation.

The tufo music and dance, with its centre in the Island of Mozambique, represents the most ancient style of traditional Makua music, expressly authorised by the prophet Mohammed on 16 July, 622, on his entry into Yterib, present-day Medina.
The term tufo derives from the word ad-duff, which refers to the drums and tambourines still used today, which becomes adufe or adufo in Portuguese. Due to its profound ties with Islam, tufo was originally a religious type of music called taira and played exclusively by believers and followers of Islam. The Sufi branch of Islam which was widespread in the Isle of Mozambique facilitated the passage towards more secular and feminine tufo, to be used in social gatherings. 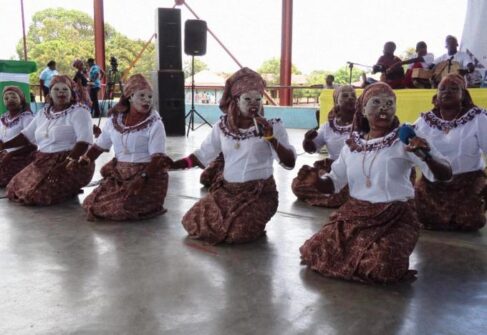 In Mozambican Sufi, in fact, the intertwining with the matrilineal Makua culture has always been bi-directional: even though three quarters of the population of the Island are Muslim, the role of women has remained central (there are three zourias, places of prayer reserved for women and six mosques with separate spaces). And while the religious leader, the xehe, has always been male, the halifa (a sort of vice-xehe) is reserved for women, unlike what happens in more orthodox Islam.

Four groups
Today, tufo is sung and acted out only by women, usually aged from 15 to 20 years or sometimes a little older, arranged in groups of 3-4 lines with 4-5 dancers in each line. The feminisation of the tufo leaves to the men just the leadership of the various groups that are more formal and organisational than substantial, since it is only the women who compose the words and music and decide upon the annual programme. 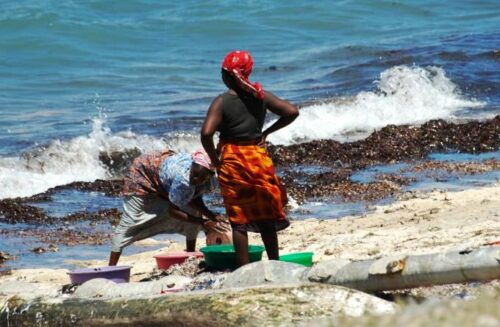 The women of the various tufo groups dress in the same fashion according to strict rules of elegance that look to tradition, with two capulanas (cloth of Indian origin, coloured and decorated, from which various clothes are made throughout the country) which are used to cover the legs, like a skirt and also the upper part of the body. A third capulana is used as a sort of turban, typical of Makua women, also in daily life. Each tufo group has its own colours and, in the complicated preparations, make-up using mussiro is essential. It is obtained from the small trunk of the homonymous tree which, once it is soaked, produces a natural cream that is applied to the faces of the women, producing extremely smooth and shiny skin.
The tufo music is sung by all the dancers with two main voices, one in a low tone and the other high. The dancing then begins, following the rhythm of the music. At first, the women kneel down; then, following the rhythm, they stand up and begin to dance by rotating their bodies, heads and shoulders, with the right hand closed and the left resting on the hip. The musical part of the tufo is provided by four drummers; one plays the khupurra (with a deep sound), another plays the ngajiza (in a higher tone), with a rhythm similar to that of Arabian music, while the  pústuwa and the duássi produce a higher tone that is closer to the Bantu rhythms and tonalities. 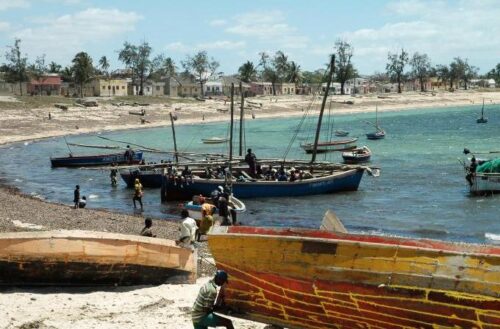 On the Island of Mozambique, there are ‘Mother’ tufo bands that have their own ‘Sisters’ scattered all over the Makua world, including the cities of Pemba and Nampula. Today, the tufo texts, apart from the celebratory ones which are indeed more numerous, concentrate on the daily life of the Makua such as unions between men and women, betrayal, maternity, poverty, norms of morality and behaviour etc. The regulating centre of this social universe is the female figure. The tufo musical texts are mostly handed down orally and they can now be recorded thanks to the radio and videos available on YouTube. One of the best-known interpreters of tufo was Zena Bacar, who died in 2017. He always defended the values of the Makua culture in harmony with the fundamental rights of the women of Mozambique.
Belonging to a tufo group gives economically and socially marginalised women the possibility to acquire a recognised status, a precise artistic and professional identity. The tufo does not bring large economic benefits but widens the network of contacts that may be used to acquire a minimal economic status. The very fact of ‘becoming someone’ allows these young Makua women to develop their identity which will also be of help in daily life, apart from their artistic calling.