On his 31st international journey (4 – 10 September), Pope Francis visited Mozambique, Madagascar and Mauritius. It was a journey that showed his concerns in the fields of peace and poverty as well has his great desire for justice.

The streets of Maputo are particularly dark at night, especially in the outskirts. But the poor lighting could not hide the run-down condition of houses, blocks of flats and shops. And neither could the enthusiasm of the Mozambicans who took to the streets of the capital, always in a formation resembling two coloured wings, dancing and celebrating around the Popemobile. Pope Francis went to Mozambique first of all to express his ‘closeness and solidarity’ with the victims of Cyclone Idai and Cyclone Kenneth that claimed more than 600 victims and also brought to its knees the economy of the country already devastated by Al Shabab Islamic extremists, corruption and inequality. With this in mind, speaking to the authorities at the ‘Ponta Vermelha’ building, he pleaded for ‘the necessary reconstruction’ of the country. 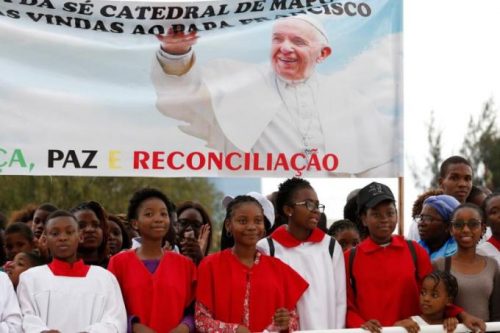 Pope Bergoglio visited Mozambique also to ‘bless’ the peace. On 6 August, an agreement was signed between the government and the opposition, bringing military conflict to a halt. The agreement integrates and implements the historical ‘General Agreement’ of 1992 sanctioned in Rome through the mediation of the Community of Saint Egidio – in particular with the founder Andrea Riccardi – and of the Italian government: the pact put an end to the civil war that caused a million deaths. For Pope Francis, the handshake in August was ‘a hopefully decisive milestone’. He invited everyone involved to consolidate the process of reconciliation. “In all these years”, he recalled, “you have seen that lasting peace – a mission involving everyone – requires hard work, work that is constant and unrelenting, since peace is like a fragile flower that seeks to bloom among the stones of violence, and it is necessary that we continue to affirm it with determination but without fanaticism, with courage but not exuberance, with tenacity but intelligently”. 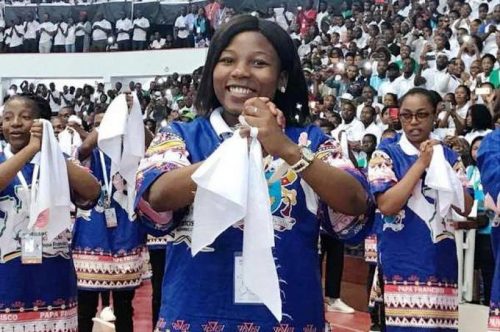 The Pontiff encouraged the 6,000 young people attending the interreligious meeting at the Pavillon Maxaquene to resist both ‘giving up and anxiety’. He mentioned two famous Mozambican sportsmen as examples of perseverance: the footballer Eusebio da Silva, nicknamed ‘The Black Panther’ or ‘The Black Pearl’, who was actually born in Maputo; and the middle distance runner Maria Mutola. “I remember a great football player from these lands who learned never to give up”, the Pope said. “Eusebio (1942-2014), despite being hard up and suffering the premature death of his father, kept making progress until he became a star of the Benfica Lisbon team and one of the most important and famous footballers in the history of world football. On her fourth attempt, Maria Mutola won the 800 metres gold medal at the 2000 Sydney Olympics, as well as nine world titles, without ever “forgetting her people, her roots, but continuing to care for the needy children of Mozambique”. Pope Francis visited the homeless at Casa Matteo 25. While all the photographers stayed outside, he greeted some guests individually with a choir chanting ‘Long live Pope Francis’. It is not at all impossible to combat the scourge of HIV.
Even in Africa where AIDS is widespread. Pope Francis said as much at the Dream Centre run by the Community of St. Egidio at Zimpeto, in the outskirts of Maputo. There ‘hope is born’. 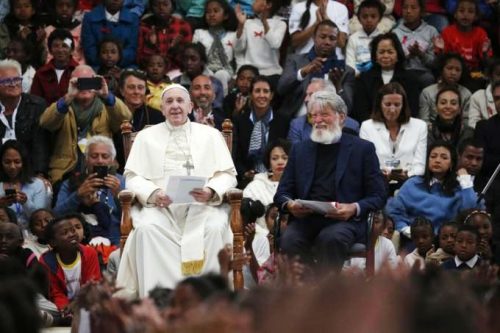 Then Madagascar. With a spade in his hand, Pope Francis planted a baobab, symbol of Madagascar flora. It will stand as a reminder of his visit to the African island, home to 5% of all known plants and animals. It is also a reminder of the appeal launched by the Bishop of Rome some minutes earlier when addressing the local authorities. It was a cry sent out to the whole world, in the presence of ‘representatives of the international community’: it is necessary to defend biodiversity against deforestation, all too often ‘geared to the advantage of but a few’, and which may ‘compromise the future of the planet’. “We can now understand why the fires that are devouring Amazonia are a threat to the whole of humanity”, Pope Francis explained.
Moving through the streets of the capital he saw with his own eyes the children busy making mud bricks between the huts and the little ones with their tired eyes and outstretched hands hoping for something from passers-by. This is why Pope Francis, in his speech, asked first of all that the politicians should do their duty and protect the citizens, ‘especially the most vulnerable’, and promote development that is dignified and just, truly ‘integral’, and not just economic. 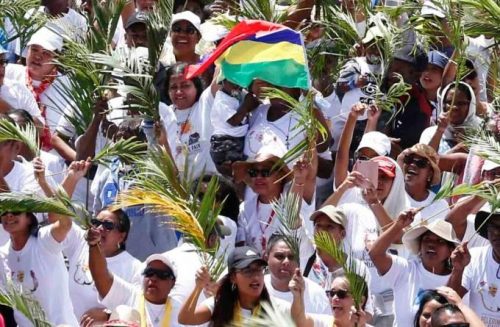 Then, with reference to the natural resources of the ‘Red Island’, as it is called due to the presence of deposits of laterite, he launched a series of warnings: “The forests are threatened by fire, by poaching, by the unchallenged harvesting of precious timber”. Animal and vegetable biodiversity is in danger ‘because of smuggling and illegal exports’. Pope Francis knows that, “for the interested populations, many of the activities that damage the environment ensure their survival for the present. It is therefore essential to create income-generating activities that respect the environment and assist people to emerge from poverty”. In other words, “there cannot be a truly ecological approach without social justice which guarantees the right to the common destination of the goods of the earth to present and future generations”.
In the eyes of the Pontiff, Mauritius is an oasis of peace. “The DNA of your people preserves the memory of those migration movements that brought your forefathers to this island and also led them to open themselves up to what was different so as to integrate them and promote them for the good of all”.
He said this while addressing the authorities during his one-day visit to that island in the middle of the Indian Ocean. He added, “I therefore encourage you to accept the challenge of welcoming and protecting migrants who come here today seeking work and, for many of them, better living conditions for their families”. 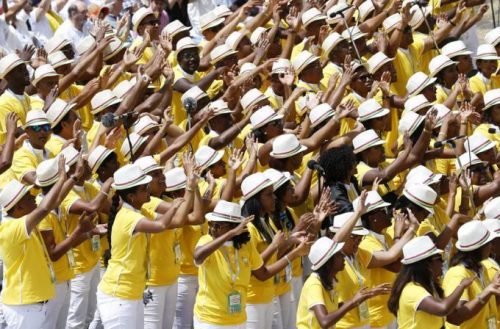 It is by continuing to follow the praiseworthy path indicated by the Pontiff, which shows ‘more the efforts’ of Mauritians ‘to promote the encounter of cultures, civilisations and different religions’, that we may play our part in the struggle against discrimination.
During the return flight, the Pope revealed: “Along the roads of the three countries there were the people, convoked by themselves. They were dancing in the rain and they were happy. People came on foot the previous day, barefoot, and slept there on the spot. They wanted to be with the Pope. I felt really small faced with all this greatness. And what is the sign that a group of persons are a people? Joy. There were poor people there, people who had had nothing to eat that afternoon. They just wanted to be there and they were joyful”.