In the world of rural Africa, the market is not just a place for buying and selling or commercial exchange.

All over the continent, the market is a place characterised by an intense celebration of social exchange and becomes a place of encounter between the scattered members of one’s family, one’s own village and of various villages. Market day is not only a day of rest but also a holiday. Friends meet and fiancées plan their meetings while business goes on. 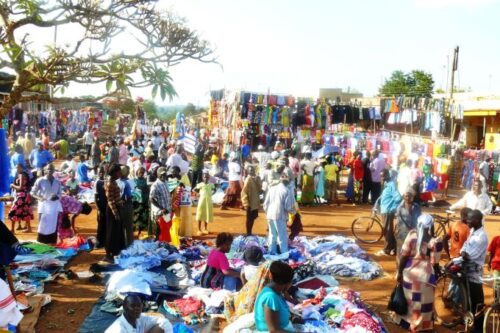 “The market is nobody’s home”, says the Mawri (Niger) proverb. It is everybody’s home. It is a public space with no limiting barriers or confines and is open to all.  It is a neutral arena par excellence.
The neutrality of the market comes from the need every community has to communicate and have exchanges with the outside world, on a sort of ‘no man’s land’ on the border of all territories controlled by a community. Its absolutely neutral character emerges clearly in the ancient prohibition, in force in most of West Africa, against bearing arms within the designated space. Nevertheless, almost all markets have a place where beer made from millet or sorghum and other alcoholic beverages are sold but the place is always located on the edge of the area in case drunks might start a fight and disturb the correct running of the market, a place of peace, chatting and neutrality.

The market and the sacred
“The market belongs to the people but it is also owned by the spirits. If you make them an offering, you calm their hearts and so they stop and urge the men to come with their loads. It is they who attract the people — a lot of people”. These words of an elderly woman in Karo (Nigeria) show the ties between the market and the sacred, an element that characterises the markets of West Africa and sometimes becomes a determining factor in the choice of location of the marketplace. 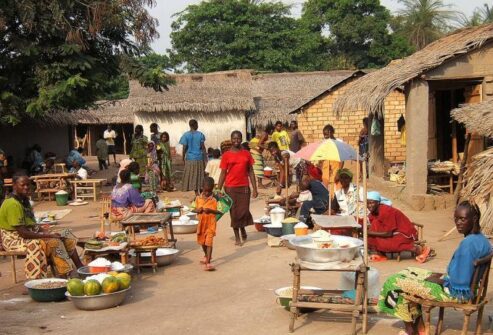 The marketplaces were chosen by an ancestor or a local wise person. Still today, it is possible to find an altar where the elders go to offer sacrifices so that the market will be well animated. Sometimes, the markets play a neutral role where disputes among groups are resolved, and the magic connected to them is often invoked to resolve disputes of a political nature.
On market day, what prevails is not so much the circulation of goods as that of people. We may say that the words are the goods that circulate most in the market.
In almost all the traditional African societies, the markets of a given area, each being held in the aftermath of the other, form a cycle that represents the local ‘week’. The system for calculating the brief period of time is rather widespread in West Africa. Among the Tiv in Nigeria, for example, markets are held every five days and provide a reference for short periods of time. If one travels in the country and leaves the area of one market to enter another, the name of the day changes. In the same way, among the Dagomba in Ghana, the cycle of six days is much more important than the lunar cycle. 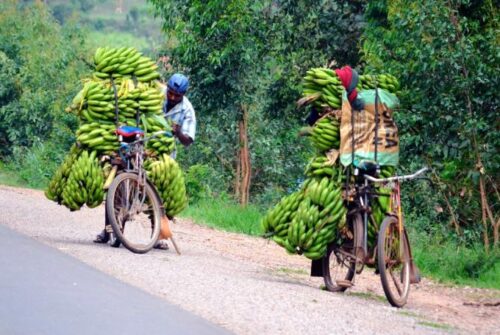 The Dagomba today have adopted a week of seven days, of Islamic origin, but among all the Dagomba and in Konkombaland, the old ‘week’ of six days is followed in the market cycle. Each day of this week, a market is held somewhere nearby. The days of the week are often called by the name of the market. The cycle norm of rural African markets, adopted as a base for calculating time, goes back to ancient times. In the course of their colonisation of Africa, the Romans found what they called nundinae (from novem dies, since the cycle of markets in ancient Rome was based on a week of eight days and so the same market was repeated on the ninth day), which, however, followed a period of four days. Here we find a way of calculating time that is different from that based upon ecological cycles, seasons, rains, or the moon. This demonstrates that it is not true that the calculation of time in Africa is based only on natural events: it is also based, as in this case, on concrete facts that refer to social phenomena such as on markets, the point in question. Market-time is a world within which men contract obligations towards one another and it is therefore much more perceptible with respect to structural time connected to rites of passage, or ecological time based on the seasons.

Managing space
Even the space within the market and the arrangement of the stalls often reflects characteristic elements. In the smaller markets, the centre is occupied by the women of the community where the market is located – a sort of reserved place – while those who come from outside take their places around the central nucleus, often according to the villages from where they come. 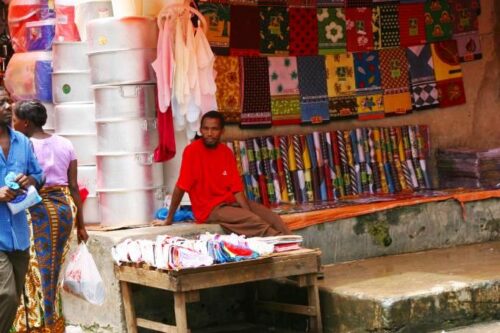 In some markets, there is an authority who declares the market open. This is to protect those merchants coming from more distant villages, sometimes many miles away, and to prevent the local women sellers from starting their selling early and getting most of the business.
In larger markets, the arrangement follows the type of merchandise. We can find sections for fabrics, victuals and a food section which may be subdivided according to the sort of food being sold. Despite this commercial division, closeness brings about friendships and alliances among the women sellers. We may also find in these markets a section reserved for foreigners. In Benin, Togo, Burkina Faso and Ghana, for example, Yoruba and Hausa have their own section, sell foreign products, and are tolerated but are also considered marginal. In many western African cities, we find quarters called wangara which indicate the presence, past or present, of Jolas. 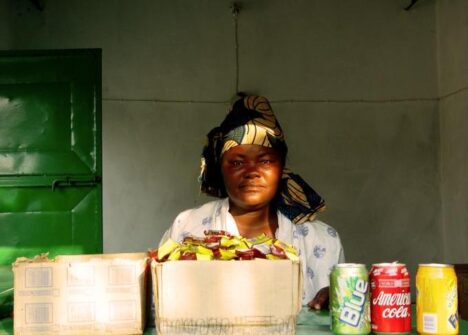 Positions in the market, like the items for sale, reflect positions and hierarchies within local society. There are some goods, such as those acquired by commerce over long distances (agricultural tools, utensils, and the like), that are the privilege of men sellers, while foodstuffs fall within the female competence. There are also some goods that cannot be sold but only exchanged. Other items such as cattle are never placed in the market but follow a different commercial route.
New ways of reasoning have been imposed by the appearance of a growing number of ‘western’ goods which have penetrated the remotest looms of the African commercial fabric, reaching every village.