The Guji are an ethnic group of southern Ethiopia. They belong to the great family of the Oromo. Traditionally semi-nomadic, today they live more from agriculture than cattle-raising. A glance at some aspects of their life and culture.

They are around five million people scattered around the most southerly area of the immense territory called Oromiya (‘land of the Oromo’). They are very close to nature, to the traditional market and to their cattle. They are tenacious workers who greatly sacrifice themselves to protect their territory and their traditional network. Among the Guji, the good is everything that fosters fecundity, wellbeing, and ethnic and hierarchic identity; evil is all that is opposed to these. Their vision of the world, their religious beliefs and their customs are greatly influenced by the pastoral and agricultural life they lead. In their symbolism, children are compared to small calves, the head of the family to the bull and the mother to the cow. The most important times in family and social life are marked by the sacrifice of cattle to the divinity and solemnised by elaborate religious ceremonial. 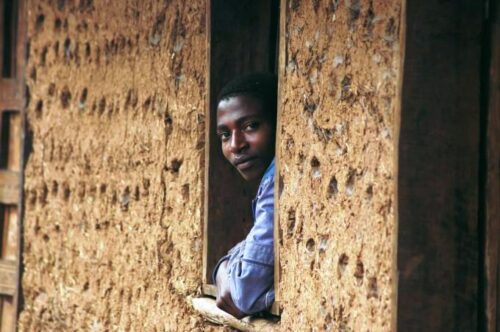 The Guji religion may be defined as cosmic. Rather than absolute transcendence, the divinity is perceived as a constant desire for immanence, in that it manifests itself in natural things and rhythms, closely connected to all that is called vitality and fertility. All visible reality is the fruit of the union between a feminine and a masculine principle. All creation is seen as a product of the generative power of a ‘father-god’ (Waaqaa; the term means both ‘god’ and  ‘sky’), who renders the earth fertile by means of the rains. 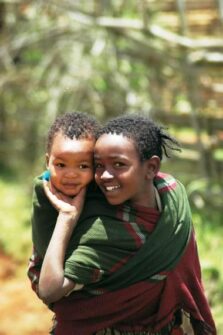 Time is understood as ‘eternal return’, which comprises, first of all, the alternation of day and night and of the dry and rainy seasons. But there is also a sequence of eight years. Unlike other Semitic peoples who tend to follow septennial periods (7 is the perfect number: the ‘male’ 4 plus the ‘female’ 3), the Guji follow the number 8 (two times 4), consequently, the ceremonies of the gadaa recur every eight years for the renewal of the fertility of the entire cosmos. The initiation of male individuals, with all their strength and vitality, is believed to be the greatest blessing for the Guji nation.

The Gadaa, a constitutional government
The traditional social, political, administrative, and religious order of the Guji has its roots in the mists of time. It consists of the subdivision of the entire ethnic group into classes of power, which produce a system of democratic institutions called the gadaa, considered by experts to be one of the most ancient and complex social structures ever conceived
by human beings. 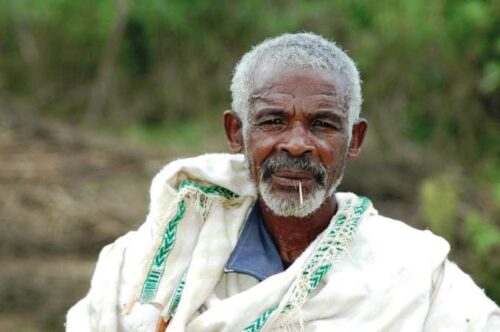 The gadaa is renewed every eight years by free elections among adult males. It is really and truly a ‘constitutional government’. The supreme head is the abbaa bohu or abbaa gadaa, a post comparable to that of president or prime minister: he has the task of calling and presiding over the chaffee (legislative assembly) and of promulgating approved laws. He is assisted by the salgee (supreme council).
The abbaa duula, on the other hand, is comparable to a head of the armed forces and is responsible for a military organisation which, for centuries, has provided for defence against external enemies in the struggle to defend the pastures, water courses and the integrity of the territory.The gadaa government is based on popular democracy and equality of representation.
Leaders who are seen to be corrupt or dictatorial may be suspended from their posts before the end of their mandate.
The  gadaa also includes the siqqee, an institution for the purpose of the defence of the rights of the women.

The family
The Guji do not live in villages but their dwellings are scattered about the highlands. A space around the main hut is fenced off for the animals, a small plantation of the false banana, a field of barley and a grove to provide firewood. The lush meadows along by the rivers are instead, common property devoted to grazing. The animals are taken there in the morning and left there for the whole day. 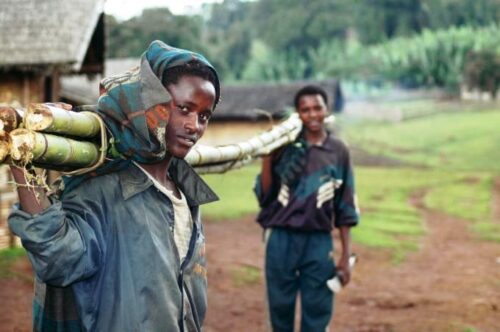 In the evening they are taken to the compound at the house for milking. We may, therefore, speak almost of an economy of a sort that is self-governing. Each family group is independent. It is only during the harvesting of cereal crops that the members of different families may get together to help one another.
The Guji have no real village or clan headmen. Authority rests with the head of the family, who also fills the role of ‘priest’. It is he who presides at the sacrifice of animals and the offering of food on the occasion of all the main events concerning the life of the family. His, too, is the responsibility of interpreting the zayyo, the portents regarding the family, and to protect it from evil influences.

The Guji woman
Even though Guji society is essentially male-dominated, the Guji woman enjoys considerable room for autonomy in running the house and she is honoured as the source of life. Her day is filled with hard work. She is the first to rise in the morning, while it is still dark. She revives the fire, milks the animals, goes to collect firewood and draw water, grinds or roasts maize and barley, kneads the false banana pulp and makes it into portions. Having swept out the hut and the courtyard, she goes to cut grass for the calves. She then prepares breakfast for the other members of the family who, meanwhile, have also got up. 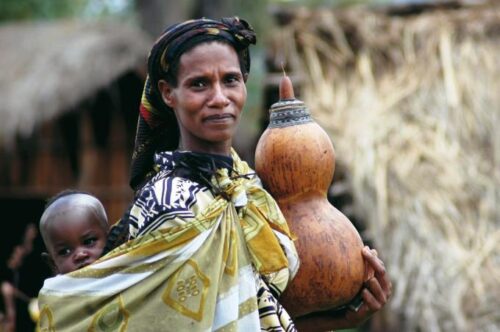 In the evening she is again at the fire cooking the supper. She then heats water to wash the feet of her husband and then oils them with butter. Lastly, she prepares the bunks for everyone, spreading cowhides on wooden frames. After washing and anointing herself, she, in turn, may lie down and rest.Besides these daily duties there are other occasional tasks such as hoeing the fields, building huts or guarding the animals while they graze. She often goes to the market to sell vegetables, butter, or containers for milk. By doing so she earns a little money to buy berberé (a small hot pepper), salt, tobacco or, when possible, some clothes, perfume for herself and her daughters and small items of ornaments for women. 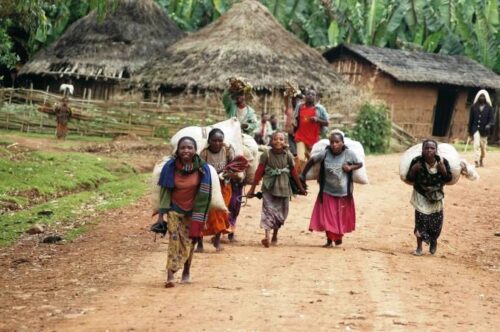 The traditional culture of the Guji, with its connected values and its environments rich in forests, water courses and natural resources is today seriously threatened by the modern world. The number of Guji people doubles every 25 years. There is the danger that overpopulation and the increasing demand for arable land and firewood may transform their fertile lands into semi desert, like many other areas of the Ethiopian lowlands. Deforestation and the progressive degrading of the environment are the major threats the Guji must face. The new Guji generations, the first to be completely secularised, will also have the difficult task of establishing collaborative, rather than conflictual relations with their neighbours.