In the Chadian region bordering with Libya, an area rich in gold,
we find a crossroads of illegal trading, ethnic disputes and military positioning.

The Tibesti region is a triangle of mountains and desert in the north west of Chad, confined between the Libyan and Niger borders. It is an impenetrable territory accessible only by air or over very rough roads. For some time it has been focussed upon by militias, tribal clans and rebel groups that ‘govern’ the chaos reigning in this central part of the Sahara desert. The objective being fought over is the gold mines and Tibesti is especially rich in gold.
The gold racket is a transnational business. Once the gold is extracted in northern Chad, it is taken across the porous border of southern Libya. One of the first distribution points is Sebha, in Fezzan: there the gold is melted down and sent to the ports on the coast, or else it is sent by air to countries in the Persian Gulf. 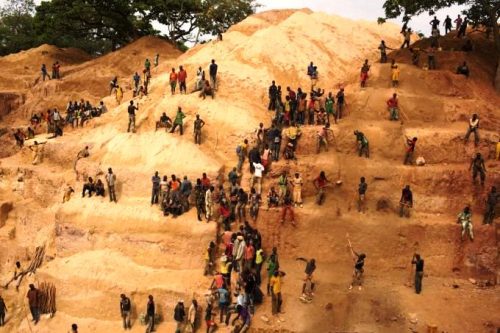 The miners who work in the deep mines are mostly from the south of Chad but some are from Nigeria, Mali and Burkina Faso. Their adventure in the mines does not last long and their pay is hardly enough to survive on. In a matter of a few months, they become easy prey for armed groups or human traffickers. In many cases, workers accept to go to the mines as a last desperate effort to reach the coast of Libya and attempt to cross the Mediterranean.

The Toubou routes
Tibesti is swarming with militias that fight among themselves for control of trade in gold, arms and human beings. The ethnic Toubous are the historical inhabitants of the region and they control the routes leading to Libya. All the rest is divided between the Sudanese Movement for Justice and Equality, active in Darfur, and a network of Chadian rebel groups: The Front for Change and Concord in Chad, The Military Command for the Salvation of the Republic and The Union of Forces for Democracy and Development. The most serious threat to Chadian President Idriss Déby comes from the Union of Resistance Forces (UFR). 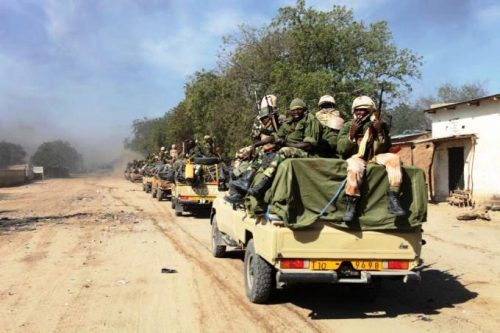 Formed in 2009 at the height of tensions between Chad and Sudan, the UFR is composed of eight armed groups, trained mostly by militias of the Zaghawa tribe to which the President belongs. Up to 2010, it was based in Darfur, and was then forced to move to the south of Libya. Most of its commanders took part in an attempted coup in Chad that started in 2008 in Darfur but was halted at the gates of the presidential palace in N’Djamena. Then, like today, the UFR was led by Timan Erdimi, a nephew of the President who has lived for years in exile in Qatar. Timan Erdimi and his brother Tom Erdimi (in exile in the USA), entered on a collision course with their uncle when, in 2006, he removed their right of succession and re-wrote the Constitution to have himself re-elected. This ‘family feud’ descended into open conflict. The most recent relevant action of the UFR goes back to last February when the intervention of French fighter planes halted a rebel incursion from Libya.
More than 250 militias are said to have been captured and more than forty vehicles destroyed.

Awkward allies
The episode has shed some light upon the ‘awkward allies’ of Déby. On the one side there is the Libyan National Army of the Cyrenaica General Khalifa Haftar who, last January, launched an offensive at Sebha to bring pressure to bear on the Toubou and the Chadian rebel groups based in the south of Libya, in a clear attempt to take over the illicit trade passing through, including that of gold. On the other side there is France. Paris has very sound reasons to challenge the golden desert of Tibesti. 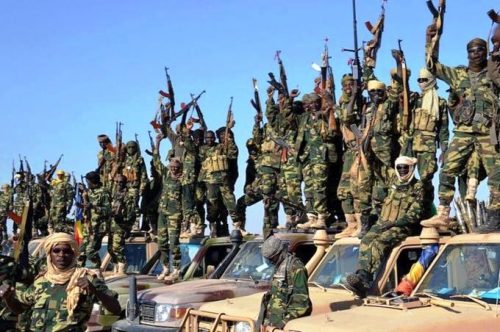 In N’Djamena the general headquarters of the Barkhane anti-terrorist operation has its base while, in Tibesti, in the Wour zone, in support of the Sahel G-5 (a pan African military Force which, together with Chad, is also composed of soldiers from Mali, Burkina Faso, Niger and Mauritania) the Elysée Palace, together with the European Union, is preparing to invest millions of Euro to construct a military base and a landing strip. An air bridge could prove useful both to Chad and to France for the swift transport of gold from the region.

Soldiers as allies of the miners
Although strengthened by this support, Déby seems destined to become bogged down in the frantic Tibesti gold rush. His soldiers are badly paid and they have no intention of waging war on those working the mines. Instead, they actually provide protection for the installations (generators for electricity, metal detectors, mercury to separate the sand from the gold and small excavators) and supplies (petrol, food and water) for the prospectors in order to obtain some share of the profits of gold digging. 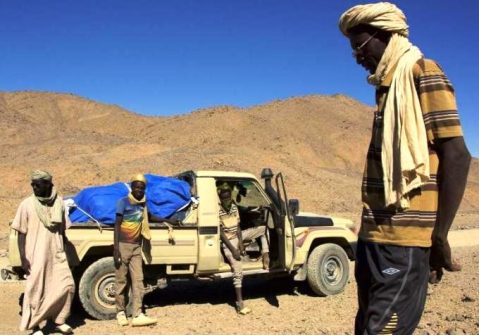 For this reason, the latest attempts by the President to tighten the noose around the traffickers have proved futile. Since November 2018, the army has suffered a wave of desertions: In February, a colonel was dismissed for refusing to attack Miski (where there are deposits) and, in March, the offensive at Kouri Banda (another mining area) produced no results.With its army over-stretched in external conflicts (in Mali and in the Lake Chad Basin against the Jihadists of Boko Haram) beyond its capabilities, and demoralised by cuts in compensation for the economic crisis caused by the fall in oil prices, Déby can only support his military.
The result is that the chaos which governs this desert triangle also appropriates the gold of Tibesti.
Rocco Bellantone