Giraffe, in the Sindebele and Zulu languages, is Ndlulamiti, meaning literally ‘higher than the trees’, is one of the most iconic animals of the African continent. The tallest animal in the world, it can reach a height of six metres. The characteristics of this mild herbivore have enabled it to survive by blending in with its surroundings. However, the giraffe is in serious danger of becoming extinct due to the continual reduction of its habitat.

The giraffe is an artiodactyl of exceptional dimensions with the female weighing as much as a ton and the male 1200 kg. It is the only one of its kind, not only because it belongs to an almost unique family (that of the Giraffidae, which includes giraffes and the rare okapi), but also because its physical characteristics distinguish it unequivocally from any other mammal. While its height represents its more evident characteristic, its outer covering and irregular-shaped blotches make it no less unique among herbivores. The giraffe’s long neck, which may exceed a weight of 200 kg, enables it to reach the highest branches of trees beyond the reach of most other herbivores, with the exception of the elephant, and to carve out a specific alimentary niche for itself where it finds few competitors. Nevertheless, the bone structure of its exceptional neck is composed of only seven vertebrae, just like any other mammal, including humans. The exceptionally long, slender legs enable the animal to take long strides and to reach remarkable running speeds, even though the giraffe’s movements may appear elegantly slow. 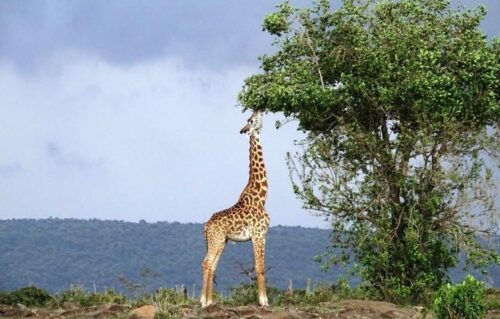 The scientific name of the giraffe, Giraffa camelopardalis, reflects an ancient myth that describes this animal as a cross between a camel (its mouth is like that of a camel and it also chews like a camel) and a leopard (due to the blotches on its skin). Its numerous sub-species are similar, though different, as regards the appearance of their hides.
From the dark brown blotches with irregular outlines of the southern African giraffe and those of its cousin the Thornicroft (endemic to South Luangwa, in Zambia), to the network markings of the Kenyan reticulated Giraffe, each sub-species has a characteristic skin but the pattern of the markings is a characteristic that is unique to each individual within
any given sub-species. 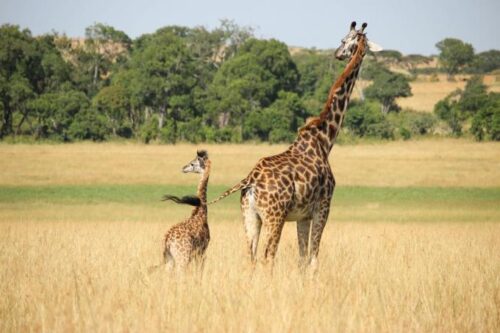 These dark markings are a most effective camouflage that fragments the outline of the animal and, at the same time, makes it blend in with its environment, often making a motionless giraffe in the bush become invisible, even from a few metres away.
Giraffes have at least one pair of horns composed of bony protuberances covered in hide and skin (unlike the keratin covering that antelopes have), but the males also have a third horn in the occipital zone that is less noticeable than the other two. The two main horns are, from birth, separate from the cranium – to facilitate calving – and become attached to it only after a few weeks.
The tongue of the giraffe also has unique characteristics: it has a bluish colour, more than a metre long and capable of freely grasping and manipulating even the branches of the karoo and white acacias covered in long, sharp thorns.

The ‘problem’ of height
The height and dimensions of the giraffe, together with its ability to launch deadly kicks in all directions, render the individual practically invulnerable to predators; only a large and experienced pride of lions can successfully hunt – and not without danger – an adult giraffe. However, the giraffe’s height also creates a problem that it had to face and resolve during its evolution. Sending blood to a height of six metres requires a good pump and the giraffe’s 12 kg heart fulfils this task efficiently; nevertheless, such a pump means pressure is high and this, in certain conditions, may cause dangerous on the ‘pipes’.
When a giraffe lowers its head to drink, it experiences the added pressure of gravity which would possibly cause the blood vessels in the head to burst. To counteract this pressure, evolution provides a remedy by means of a complex network of capillaries located in the neck of the giraffe: the wonderful network. This organ instantly balances the pressure of the blood, avoiding excessive pressure when the animal lowers its head and any drop in pressure if it suddenly raises it. 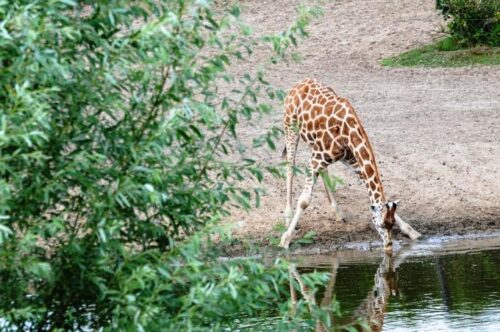 The legs, too, may suffer the negative consequences of high blood pressure: this is why the hide of the giraffe is so elastic in these areas and functions as a containing measure to avoid damaging blood vessels close to the skin. Being so well equipped, the giraffe may sleep soundly; but how and where does a giraffe sleep?
Giraffes spend from 16 to 20 hours feeding every day and so there is not much time for sleep. When they can, they crouch down with their legs folded under their breasts (the typical position of ruminants). Alternatively, they may rest their heads in the fork of a tree and enjoy forty winks. They never lie down completely because, as ruminants, they would be choked by the liquids in the reticulorumen, and they never really sleep. Like all ruminants, giraffes never sleep in the ordinary meaning of the word but enter a sort of ‘energy-saving mode’ during which the brain waves assume characteristics that are very similar to those produced by a non-ruminant during sleep.

The social system of giraffes
Despite their fame as formidable adversaries even for the most powerful predators, giraffes are essentially meek animals. They are very quiet (they make but a few sounds and these are not easily heard by the human ear), they live gregariously without, however, forming stable herds or groups. The social system of giraffes is, in fact, based upon temporary associations; they associate for short periods in groups without fixed ties from which, at any time, one or more individuals may separate to join another group or live a temporarily solitary life. 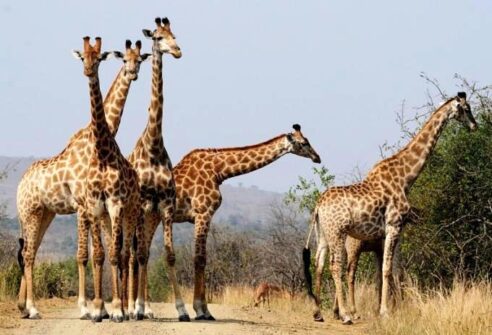 Consequently, they do not defend territory but during the mating season, the dominant males clearly vaunt their status by means of an ostentatious pose which they show off in all their majesty, threateningly approaching any potential male rival. If the latter does not show subordination, they may engage in violent blows of their horns driven home by their long muscular necks, while rivals maintain parallel positions. This is but a small break, essential for procreation: an interval of time after which the giraffes again become meek and peaceful. Unfortunately, however, despite their meek character, fate has not rewarded them: today the giraffe is in grave danger, caused by the continual reduction of its habitat by human expansion and its population decline has reached alarming levels, bringing it to local extinction in many areas of the continent.
The grassy savannahs punctuated by acacia trees or the open forests and riverbanks of Africa would not be the same without the long sinuous figures of these herbivores that, from time immemorial, traverse the continent. Like many of their similars, they have not managed to resist the implacable pressure of human expansion.