Agbogbloshie, in Accra, the capital of Ghana, is one of the largest waste dumps for electronic appliances in the world and the workplace of thousands of people who are daily exposed to some of the
most toxic substances resulting in premature death. We went
to see the dump.

Sule uses a hammer to strike what looks like an old engine spark plug. It is hard to tell one piece from another in the jumble of metal objects in front of him. A dismantled microwave oven, a steering wheel from a car, parts of a fan, wires of all sizes and colours, some metal tubes. They are all piled up on the ground that is blackened with ashes. Sule says he is fifteen. He wears jeans and a blue shirt stained, like his skin, with soot. “I have been working here for the past three years”, he says. “I make my living by selling spare parts for vehicles that have been thrown away. I know which parts can still be useful and can be sold for a little cash”. 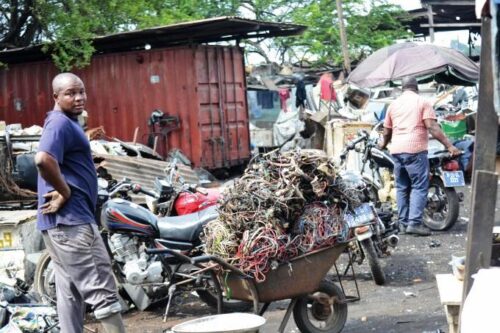 It is very hot in Agbogbloshie, believed to be one of the largest ‘technological’ dumps in the world. It covers about two hectares and stands on the bank of the Korle River. It is like any other district of the Ghanaian capital, in a country of more than thirty million inhabitants, located on the Gulf of Guinea where 25% of the population live below the poverty level and 7% live in extreme poverty.
There is one big difference: here the hot air is mixed with a toxic cloud of grey dust and there is a strong smell of burned metal and plastic. Agbogbloshie smells of endless pollution. 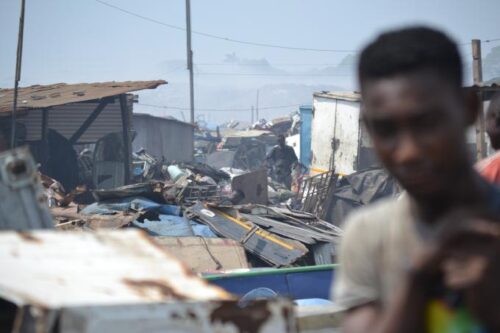 Various studies carried out in recent decades confirm this. A Greenpeace study found that the samples they analysed contained several dangerous substances, some of which were highly toxic such as those containing lead, cadmium or antimony which were present in the soil in concentrations 100 times the normal level. Another report by the UN stated that the pollution of the water and the soil had completely destroyed all the biodiversity of the area in a matter of ten years.

Minimum wage
Sule is but one of 6,500 people working in Agbogbloshie – some estimated put the figure at 40,000, according to the season – and lives on the other side of the road in Old Fadama, a slum with about 100,000 people and known as Sodom and Gomorra due to the high level of crime. The people of the district are mostly from the north of the country.
The poverty level is worsening and drugs of all kinds are commonly sold there. It is a place where people are used to armed robbery, continual clashes with the police and military on the one hand and with criminals on the other. 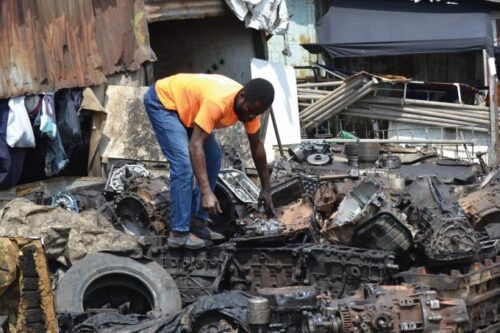 There are no gaps between the mud-walled houses with tin roofs. “I can earn around 600 Cedri a month – about  95 Euro. It is not a bad wage but I have little or no choice in any case. This is my livelihood”, Sule says. In Ghana, the minimum wage is about two Euro per day and the young man is not far wrong; he is earning half as much again as a worker in some sectors, though he has to work ten hours a day, six days a week among the worn-out electric appliances. He is risking his life and knows it may be shorter than the average.
It is difficult to establish the source or quantity of all this electronic waste that ends up in Agbogbloshie. Despite the Basel Convention that forbids the export of electronic waste, the port of Tema receives dozens of containers of rubbish from the European Union under the guise of second-hand, reusable appliances. Much of it is also produced in the EU. 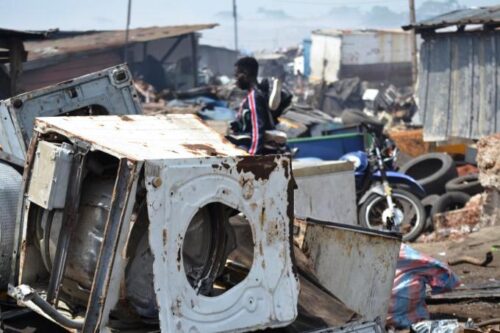 An exhaustive report by Euronews published in July 2019 analysed the commercial itinerary of this waste and stated that 85% of the electronic rubbish sent to Ghana came not only from Ghana itself but also from other West African countries.  The remaining 15% exported is not examined before leaving the European ports due to the enormous quantities of goods daily passing through them.”I estimate that around 80% of the goods exported to Africa are illegal. The Ghana port authorities say that 75% of the goods that enter the country do so as second-hand items.
The idea is that the local market should repair these appliances and try to sell them. Whatever cannot be sold is sent to Agbogbloshie”, stated Jim Puckett, executive director of the environmental watchdog Basel Action Network which in 2018 placed more than 300 GPS trackers in e-waste to track material coming from Europe.

Living without basic facilities
When asked who organises and controls everything in Agbogbloshie, they all say it is Idrisu Shaibu, a man in his sixties with a stubby beard, blackened teeth and a rough complexion. Today, Idrisu is wearing a white tunic and a kufi skull cap made of grey lace. He lives in a small shed at the entrance to the dump. He tells us: “We have many problems here. I think the worst of them is the smoke, black smoke that makes it very hard to breathe. The doctors tell us that all these chemicals cause serious illnesses like cancer”. 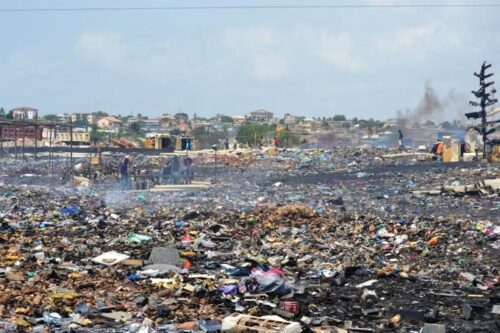 Official statistics show he is right beyond all doubt. For example, the probability of getting cancer due to inhaling arsenic is 70,000 times greater in Agbogbloshie than anywhere else in the world.  A study by the Chemicals Environmental Division of the Ghana Water Research Institute has discovered that as many as seven out of every hundred workers at the dump will contract cancer during their lives, something of a death sentence in a country with such a poor health service. Other epidemiological studies have shown a direct relationship between exposure to the metals commonly present in the area and various types of tumours, cardiovascular diseases, diabetes, endometriosis, premature menopause and changes in the hormones of testosterone and the immune system. 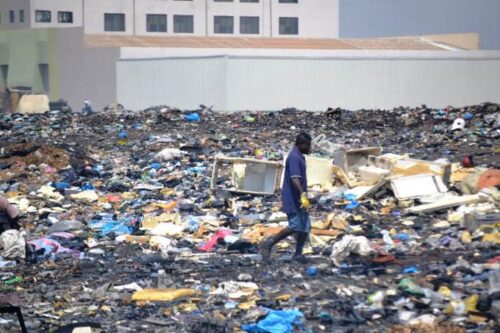 Shaibu, who protests against the lack of attention Agbogbloshie receives from the local authorities knows that his living there could shorten his life. “We have one hospital, a small one set up by a German NGO, but it is not sufficient”, he says. He also says that the solution is not to criminalise the place or the business where so many people earn their living or the workers themselves. “This business started around 1975 and at first there were just a few of us. Over time, others came, especially people with no possessions. We are now an important sector of the economy of the country”, he continues. Of course, it is a sector that forms part of the 88% of the population of Ghana who live by working informally.
Idrisu Shaibu also emphasises how Agbogbloshie has such poor social services. Even a simple thing like attending school can be very difficult for the hundreds of children living there. According to the NGO Africa Education Watch, all the schools around the site are privately run and are mostly inaccessible to the residents. The organisation also stated that this leads to a premature end to the basic education of the children who see the electric waste as one of the few ways of earning a living.
From a distance, we watch Sule as he continues working with his hammer and chisel on that old spark plug, like all the other workers in Agbogbloshie, in the unrelenting heat. The air is slowly filled with a black cloud of thick smoke and the dusty ashes of nearby fires colour everything a dark grey.