Tigray, a region of Ethiopia, guards a series of interesting churches, some of which are very hard to reach. We refer especially to religious sites built centuries ago in the area of Amba Gheralta, located in unique places and surrounded by a deep spirituality.

These churches are to be found on steep cliffs. Their location may be explained in two ways. On the one hand, the fact that they were built on heights difficult to reach denotes how, in ancient times, the faithful wanted to protect themselves from possible incursions; on the other, their very height allows them to approach more closely to the heavens, and so to God. 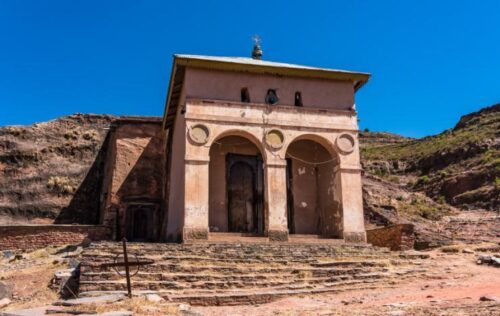 Historically speaking, their construction is said to have taken place during the period from the eighth to the fifteenth century.
During that period of time, in the area of Amba Gheralta, churches were built which are described as ‘rock-hewn monuments’ which may be divided into three types: monolithic churches completely carved in rock; semi-monolithic churches; and hypogeal churches created inside
natural caves. This area of Ethiopia contains more than
150 rock-hewn churches.

The church of Abreha and Atsbeha
Also called Debre Negast – which means ‘monastery of kings’ – the rock-hewn church of Abreha and Atsbeha is to be found about 17 km from the village of Wukro, in the region of Gueralta. It may be described as a semi-monolithic church since it was carved from the heart of the cliff but with a protruding facade. The reddish colour of the sandstone rock makes the site all the more suggestive. Its interior is adorned with splendid, well-preserved decorations dating back to the XII century. 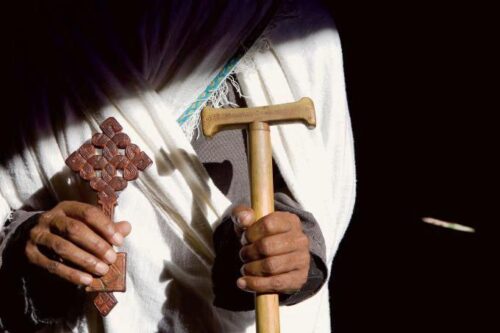 The site is of architectural, artistic, and religious interest with frescoes depicting biblical scenes and using complicated designs and deep colours. The name of the church is said to derive from that of the Christian emperor Abreha who, according to local legend, ruled together with his brother Atsbeha in the IV century. The story is combined with that of Ezana, the first monarch of the kingdom of Aksum to embrace Christianity, and his brother Saizana (sometimes written Sayzana).

The Church of Abuna Yemata Guh
Another unique church of this type is that of Abuna Yemata Guh situated in northern Tembièn on the great massif of Amba Gheralta. This holy place is pregnant with spirituality, due also to its position. It stands at 2,580 metres, carved out from a steep rock pinnacle and is therefore extremely difficult to reach. The ascent is complex with many dangerous points. However, those who succeed in making the ascent are rewarded by the splendid panorama to be seen from both this special location, and from within the church containing magnificent and well-preserved frescoes. The church is dedicated to Abuna Yemata (also written as Abba Yem’ata), one of the nine saints to whom the first evangelisation of Ethiopia is attributed. 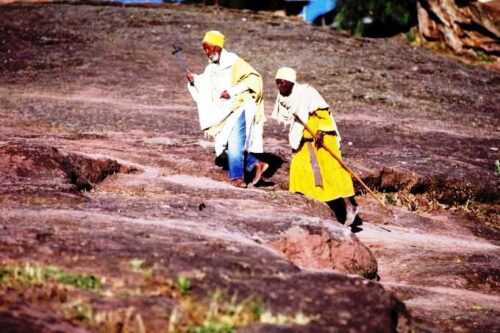 According to historical sources, this happened when King Ezana of the Kingdom of Aksum embraced the new faith. Afterwards, around 480, a group of monks called the Nine Saints introduced monasticism to Ethiopia. It was they who helped the spread of Christianity also by using religious texts in the language commonly used at the time, known as Ge῾ez: a Semitic language now almost extinct which was widely used in Ethiopia until around the XIV century.

The discovery of the city of Beta Samati
In 2019, archaeologists discovered the remains of the city called Beta Samati at a spot about 50 km from Aksum in the region of Yéha. Estimates indicate that the site was occupied for a long period of time, from 750 B.C. to 650 A.D. Therefore, the city already existed during the Pre-Axumite period.
This discovery revealed the existence of a basilica in the Romanic style which may have been used as a Christian church. This is the reason why the archaeologists who took part in the excavations have emphasised how the discovery of this ancient basilica is so important for understanding the Christian presence in north-east Axum. 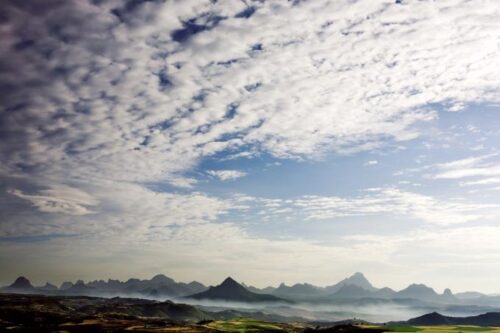 This denotes a presence predating the widely accepted date, 330, when King Ezana converted. The research and analysis are still going on, as stated by the archaeologist who directed the dig, Michael Harrower of Johns Hopkins University: “The Empire of Aksum was one of the most ancient and influential civilisations in the world, but it remains one of the least known”.Unfortunately, the great instability of the Tigray region has a negative influence on the research. An example of this is the fact that Debre Damo, one of the most ancient and important churches, was plundered early in 2021 due to the war in Tigray.
The church of Debre Damo rises about 90 km from the capital Aksum, on top of a plateau (called ‘amba’ in the local language). It is part of a monastery that is positioned on a high rock and surrounded by vertical cliffs. This religious site can only be reached with the aid of ropes. In making the ascent, it is necessary to have strong faith.