The country is passing through a phase of instability, and the situation is gradually worsening. The ongoing conflict between the armed forces (supported by the UN Mission in the country MINUSCA) and rebel groups seems on the verge of an escalation. The main battlefield is the capital of the country, Bangui.

On 13th January 2021, Bangui was under attack. Rebel groups attacked security forces and MINUSCA troops in different areas of the capital, taking them by surprise. The group of about 300 armed men were repelled and at least 30 of them were killed. But they showed the capability to engage regular troops using, as an example, the paths used by herders. This was the consequence of the weaknesses of government and international troops, especially their inability to patrol the war theatre from the sky. Militias are not (yet) able to clash head-on with soldiers equipped with heavy weapons and armoured vehicles.
But they can coordinate attacks, even if not (yet) on a sophisticated level and at a sustained pace. 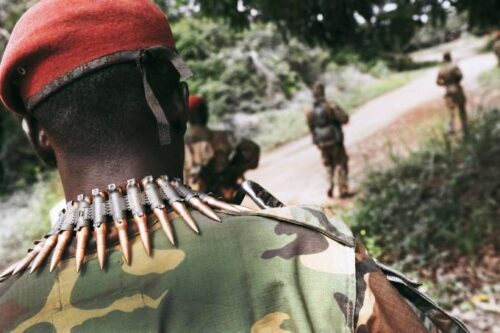 According to Hans De Marie Heungoup, an African analyst for the International Crisis Group who spoke to RFI, there are different possible explanations for this attack. The militias are perhaps trying to cut links between Bangui and the rest of the country and to stop the flow of goods. in other words, they are planning to suffocate the city. In this way, they can claim the government controls only the capital while the rest of the country is in their hands. According to UN sources, rebels have been almost completely blocking the Douala-Bangui road since December 2020. In this way they are stopping the flow of humanitarian aid, food, fuel, etc. to the city. There are about 1.5 million Central Africans who rely on humanitarian aid to survive. It is possible that militias are trying to occupy Bangui after a war of attrition, based on the spread of terror and fatigue within its enemies. That is to say, they aim in the medium to long term to force foreign troops to move away due to the excessive number of casualties. 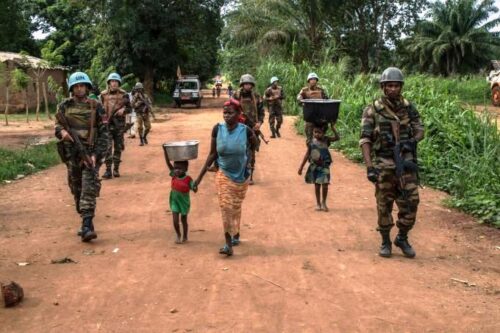 According to the estimates, there are at least 12,000 MINUSCA peacekeepers, several hundred Rwandan soldiers not linked to the UN mission and an undisclosed number of Russian contractors provided by Wagner, a private military company linked to the Kremlin. These armed men can protect the government in Bangui. But until when? And what about the rest of the Central African Republic? On 21st January 2021, the head of MINUSCA, Mankeur Ndiaye, stated that his troops are stretched to the limit due to the new threat. According to Ndiaye, MINUSCA needs more soldiers (including special forces) and more equipment (such as drones and combat helicopters).

Seven years of chaos
The Central African Republic, already a fragile state, entered this phase of turmoil in 2013, when a coalition of militias, named Séléka, deposed the then President Francois Bozizé and took power. Séléka, which may loosely be defined as a group of armed Muslims, succeeded in its military campaign basically due to the support of Chad. According to Central African sources, Séléka members on a local level depended on the Chadian consulates for political guidance. Among them there were an undisclosed number of foreign fighters, who could be easily spotted because they did not speak the local languages. Chad intervened in the neighbouring country because Bozizé, who had come to power in 2003 after a coup, thanks to the help of Chadian president Idriss Deby Itno, tried to become autonomous and searched for new political partners. 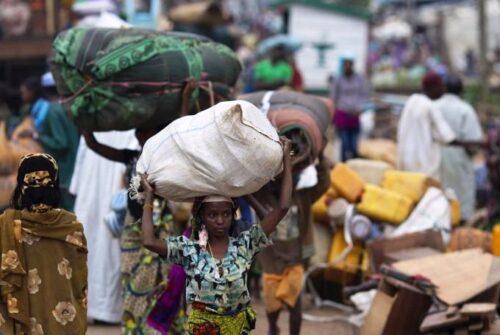 The main wound that Séléka inflicted on the Central African Republic, a wound that is still open, is the explosion of the sectarian conflict. Its militias, at least the local ones, came from the Muslim minority that until then had lived basically in peace with Christians and animists. They committed atrocities against the other groups. In response, some members of the Christian and animist communities created their self-defence militias, collectively known as “anti-Balaka”, who fought against Séléka and committed abuses against the Muslim population.
But now, in an unexpected change of front, some Séléka militias joined anti-Balakas, forming a new alliance called the Coalition des Patriotes pour le Changement (CPC). It is the CPC that has laid siege to Bangui. The CPC also has political links with Bozizé.
Bozizé was excluded from the 27th December 2020 presidential election by a court order. CPC tried to stop the polling process and called for negotiations and postponement. 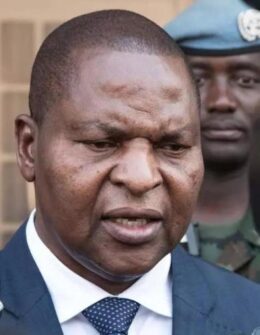 Central African Republic President Faustin-Archange Touadera was re-elected in the first round of the December 27 election.

But President Faustin-Archange Touadéra (who ran for another mandate and ultimately won) decided to go on, with the support of MINUSCA and his foreign allies, such as Russia. Mankeur Ndiaye in an interview with RFI stated that delaying the vote to meet the rebels’ requests was not a guarantee of a peaceful vote, since they could find some other excuse to ask for another postponement. And he had a point. Therefore, the poll took place in a scenario of insecurity and a sizeable portion Central Africans could not vote. According to the Constitutional Court, participation in the election was 35%. Even if it is the consequence of the actions of his rivals, that casts doubt on Touadera’s real representativity. Some of his opponents asked for an annulment of the election, but on 18th January 2021 the Constitutional Court validated Touadéra’s election and dismissed the opposition’s objections.
According to estimates, at this moment the government effectively controls only one third of the country while the different rebel groups rule the rest. Consequently, the proclamation by the government of a nationwide State of Emergency on 21st January 2021 to stop the violence is unlikely to produce concrete results, at least in most of the CAR.
That is to say, militias will basically decide if in a certain area there will be peace or not. 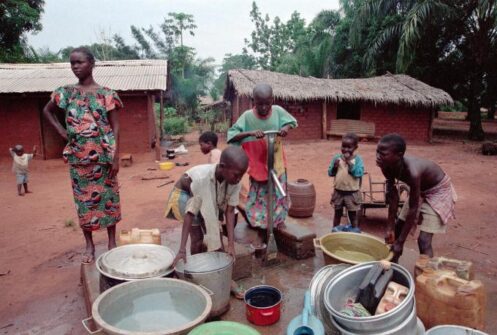 The regular troops, with the support of MINUSCA and foreign allies, launched an offensive to free some cities around Bangui and to control the Douala-Bangui road. The outcome of these efforts is still uncertain. In any event, new armed clashes are to be expected in the short term.
Different members of the civil society (especially religious leaders, both Christians and Muslims) called for dialogue and reconciliation, in the hope of defusing tensions and bringing some sort of peace. Reconciliation, if made possible, will be a long and difficult process. Even Touadéra claimed he is ready for dialogue. But not all the involved groups seem to be ready to discuss. Or rather, they aim at negotiating under their own terms. To procrastinate the dialogue could make peace even more difficult, if not impossible. Among other things, the difference between the armed groups that make up the CPC could re-emerge and lead to new sectarian fights. If that happens, the Central African Republic could spiral downwards into chaos.