Pope Francis in a new book is calling for an alliance between the young and elderly:  “Young people need the dreams of the elders so they can hope in a future. Older people and young people move forward together, and they need each other”. 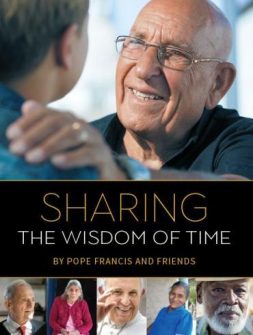 Sharing the Wisdom of Time is a collection of stories about elders from around the world. From over 30 countries, elders share their wisdom carved from lifetimes of experience. The stories are spread over five thematic chapters: work, struggle, love, death and hope, and each chapter begins with the Pope reflecting on each theme.  People’s stories are interspersed with the Pope’s own reflections on an individual’s story.

I think about the mystery of everyone’s identity. We are who we are, and everyone has their own story. Some people do not accept their identity. They want to change it. They want to be someone or something else. But wisdom means bearing your own identity, accepting yourself through and through, being proud of yourself no matter what. Elders with many years behind them have lived into their own identities over a long time. They have to reckon with their lives and how they have lived. Elders carry this wisdom in their dreams: it is their history, their very own story.
Bernard is blind but he sees us clearly! How can that be? It is because he can see himself and behold the beauty all around himself. For him this means making beautiful baskets. I have met several older blind people. I realized that many of them are able to see better than those with physical sight. Sometimes it is not easy to accept yourself the way you are, but those who live long can come to peace with themselves and with their story, even if it takes many years. Some people, like Bernard, look at their story with pride. We all should do that.

After my husband died in 1989, his relatives attempted to evict me from our family house and land. I decided to rent land for cultivation. I had to travel four miles from home to that land every day with a child on my back.  But I thank God that I reported the case and the judge was true and fair. Both properties were returned to me, and it’s where I am now.  I have tried my best to look for money to put up a strong house because the one my late husband left behind is not strong and might fa[[any time. However, I thank God because I went 10 years without steeping on a mattress and a bed, and now I have them and sleep well.  If it wasn’t for the love people showed me after the death of my husband, I don’t think I’d be alive now. My children are unable to support me, but it’s the support of others that has made me survive. Before, I had lost hope, but now it has been restored due to the love of others.

Christine’s words make us pause and think: before, I lost hope. And now find it again thanks to the love of others. She lost her husband and had to face so many difficulties and injustices. But taking the next step toward what is important is how you get back on your feet.  I once heard a motto that I liked: “A man must never look at another from above, except to help him lift himself up.”
Christine met people who helped her lift herself up.  “Get up” is a word that launches new beginnings.  It is the command that God speaks to Abram: “Arise!” God says to him, “Look at the sky! Get up and see! Try counting the stars!” There are people who fall and stay down because they cannot find someone to help them stand up. Once you have experienced what Christine did, you learn the wisdom of getting help. You experience the solidarity that allows your heart to dream. Now Christine is helping others rise up. Her children are unable to help her now, but with her dreams for them they can envision a brighter future.

Pope Francis concludes the preface: “I entrust this book to the young do the dreams of their elders will bring them to a better future. To walk toward the future, the past is needed; deep roots are needed to help live the present and its challenge> Memory is needed, courage is needed, a healthy vision of the future is needed”.