In the Karimojong group living in north-east Uganda, the number of cows determined readiness for marriage.

Among the Karimojong people marriage meant wealth for the girl’s family and pride to the man. They would not match-make their children and neither was there any kind of courtship. It was about strength and wealth.Once a young Karimojong man was ready to marry a woman, he would first look at the number of cows his family had and how many they could spare for a dowry for his bride. If the cows were not enough, his parents would request him to wait for some time. If the cows were enough then he would embark on his mission. 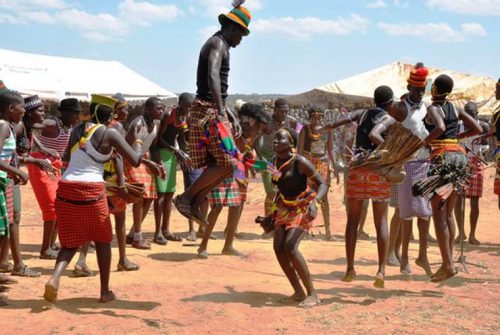 The young people met at village functions, like village dances, market days, village meetings and such like. At these functions they would spot the young ladies and if a young man spotted a lady he liked, he would begin his investigations on the young lady, and which family she came from.The Karimojong men got their wives in two ways and chose the way that best suited them. He would either approach the girl or tell her his intentions, and if she agreed then he would take her to his parents for introduction. The boy’s parents would then embark on an investigation of the girl’s family and would want to know what kind of family the young girl came from, whether they are wealthy, or a family with good family values.Then, if they have liked the family, they would approach the girl’s family, who would also embark on investigations of the boy’s family to find out how wealthy his family was. 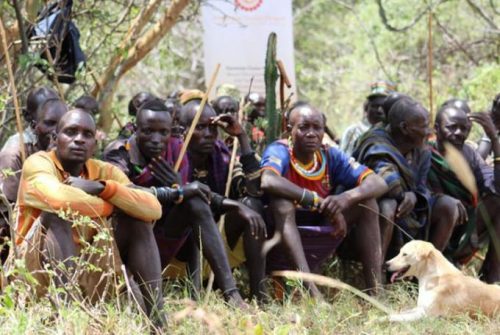 Among the Karimojong, wealth was measured by how many cattle one had. If the lady refused the boy’s request, he would not give up but begin following her to find out where she gets water and firewood from. Once he knows the girl’s routine, he would organise his gang of strong men, which will comprise his brothers and friends, and they then ambush the girl while she is on her errand of collecting water or firewood and kidnap her.
They will take her to her admirer’s hut and close the door; the admirer will then go to the girl’s parents and tell them not to look for her because she was already at his home.
The parents of the girl will be very furious with him and order him to return their daughter or else face repercussions, but the boy usually would refuse and instead convince them that he would give them cows if they allowed the lady to stay with him. When he tells them that he would give them cows, the girl’s parents would calm down.
The boy will describe the colour of the cows he will give to each member of the girl’s family. According to the Karimojong, the girl’s family share her dowry with each member of the family, meaning that all members of her family are entitled to receive some of the dowry. 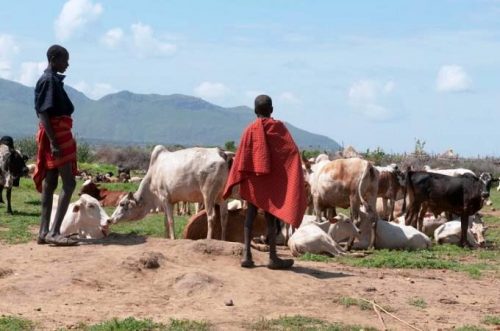 When the young man feels he is ready to give his in-laws the dowry, he organises a feast which involves brewing the local beer from sorghum by his mother and female relatives, preparing milk and preparing food. Then he invites the girl’s father, mother, brothers, uncles, aunts and other relatives and also his own relatives, friends and village-mates for the celebration.
Then the celebration begins as they eat, drink beer, milk and make merry; the celebration can last for two days. After the feast, the girl’s father is told that it is for time for him to take his dowry.
The strength of the girl’s father would earn him a bigger dowry, because then they would not count the number of cows to be given to him. The father of the girl was given a spear, and the boy’s family then take him to a field where the cows are and they chase the cows to scatter them. He is asked to throw the spear in the midst of the scattered cows and the farther the spear goes, the many the cows the nearer the spear lands, the fewer cows he gets. 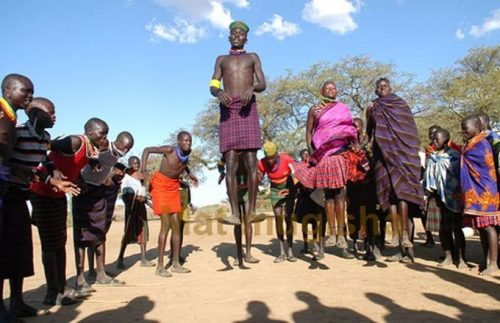 After this ceremony, the girl’s relatives share the dowry among themselves. Then a smoking pipe is filled with tobacco, lit and passed around to each member present. This is a sign to approve the agreement and the marriage.
When this is done, the girl is brought before the crowd, smeared with black soil and told to go with her husband to conceive, have children, manage a big home and be wealthy. This was a type of blessing from the girl’s parents.
Two ladies then hold the girl by her hands and lead her to her husband’s hut through a large cattle-kraal door and lead her to her own hut, where the door will be shut, the fire kindled and the smoke rising from the roof of the hut was a symbol of her ownership and of her welcome to her husband’s family.The next morning, the girl’s relatives will drive their cows (dowry) off and return to their home.
These cows are usually many and one could drive home up to a total number of more than thirty to one hundred cows, depending on how strong the girl’s father was.When the girl’s relatives have left, the young man will be sure that his wife was now his, and would feel very brave, walking all over the village. They would then gather in the kraal and summarise the ceremony with a dance.