The Tapeth are a small ethnic group living with the Karamojong in North Eastern Uganda. They are found in a village known as Tapac that is situated in the ranges of the Moroto Mountains in the Moroto district.  Among the many cultures the Tapeth have is a dance
known as the Naleyo dance which is performed every year after
the harvest season.

During this dance many things happen. It’s a day when people in the village are happy because of the good harvest. Warriors too join the dance in a bid to show the village how strong they are. Young men who want wives come here to be able to prove to their suitors that they are the most capable because they are strong and can handle or protect them. The young women looking for husbands will also be here to try and see if they have suitors. The dance usually begins at 11am and can go on till 4pm although the many ceremonies of the Naleyo start from 11am to mid-day. In the morning people from the village and neighboring villages begin flocking and gathering at the dance arena which is usually one of the empty kraals or market ground. Lots of activities will be taking place with people moving up and down while getting things ready for the dance. 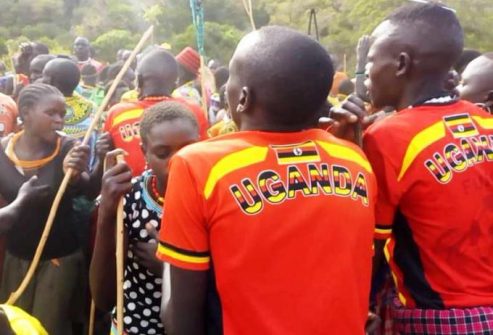 Lots of booze, meat, food and maize is ferried in to the place; while fires are lit to begin doing grills and roasting maize or even cooking food. As soon as the meat grills and maize are ready, people begin coming in one by one in groups. The crowds begin to swell all looking very smart and ready for the dance. The men are smartly dressed in their traditional attires that include hats decorated with chicken or bird feathers, they also wear bright coloured beads around their necks and decorate their ears will blings and earrings. They wrap their waists with the nakatukok which is a traditional wrapper that men wear around their waists. They also carry their small stools as part of the tradition; every Tapeth man carries with him a small stool to every function, and also have the whistles which are used as instruments during the singing at the dance. On these small stools, the men will sit patiently while waiting for the ladies to begin beckoning them one by one for the dance. 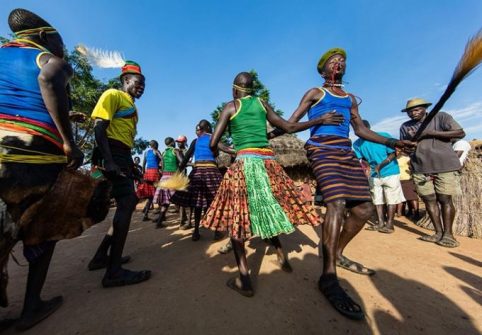 Meanwhile the women have neatly braided hair; and wear vests and knee length skirts to entice their dancing partners. They also decorate their faces with ash and charcoal and also use traditional chalk called emunyen. Just like the men, they also wear bright coloured beads around their waists and carry two sticks that will help support them during the dance. Once the crowd has built up and everyone seems ready for the dance, a team leader who is always a man will begin the Naleyo song. This song can be in praise of someone at the arena or a group of people at the arena. Then the rest of the people join in singing and the women begin to beckon a man of her choice to come dance with her.
Since it’s a harvest season everybody is happy and people tend to forget their worries, and at the Naleyo dance a woman is allowed to dance with any man that she thinks will please her and one of her choice. It can be a married or non-married man. It’s usually hard to find a married couple dancing together at the Naleyo because they are allowed to choose other partners to dance. 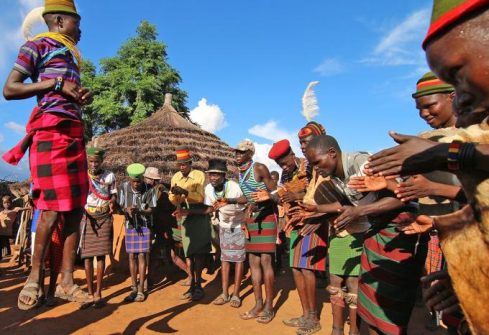 If a man has not been picked by any woman for the dance he will not join the dance. Once the dance begins, the women will hold the two sticks in their hands very firmly; and push their chests forward towards their partner. This is because the man is supposed to hold his partner’s breasts while jumping up and down in the dance. The dance goes on until mid-day when the official Naleyo closes. Once the Naleyo ceremony has ended at mid-day and everyone is drunk and very happy, the edonga dance is performed as a continuation of keeping the day lively. This edonga dance is performed in the late evening into the night and this dance will conclude the day’s activity.
This particular dance is only performed by young energetic men who will want to prove to their suitors and other young ladies how strong they are. The young men begin by singing a song and all join in while dancing. This particular dance is performed while they are jumping up and down; the higher the young man jumps the stronger he is and the more suitiors he is likely to attract. Also the higher the dancer jumps, the more praise he gets so they work hard to jump higher than each other.Since there are many people at this place, many things happen. This day may be a day when a young man takes home a young lady as his bride, since when a young man has admired a young lady, he may use this dance to make known his intentions to the girl. 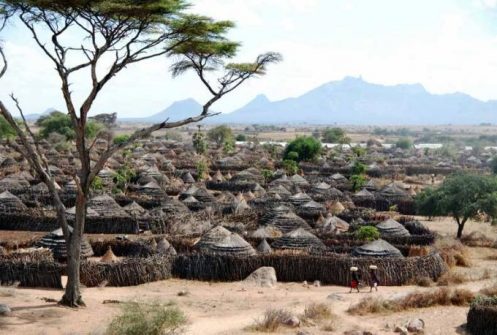 If he senses rejection from the young lady, he will approach her in a traditional Tapeth way. He calls the strong men he came with to the dance and tells them his intention and also tells them his fear; then the men will simplify the situation for him. The men then carry the young lady in question and take her to the suitor’s house and she is not allowed to leave the house. Once she spends one night at his home, she will be embarrassed to go back to her parents’ home so she will stay at her new home until her brothers and father follow her, either to try or take her back home or ask for the bride price. The girl’s relatives are usually met by resistance from the young man who promises them the bride price including cows.