The people from Tapac are referred to as the tapeth. They live in the  mountain ranges of mountain Moroto in the north east part of Uganda.  We look at the intercession prayer known as Akigat

In the tapeth language, akigat means invocation; it can be of anything or someone. The people of Tapac have used akigat as a prayer where they gather and call upon their gods, ancestors and spirits to come to their rescue in bad times. They also use the akigat to chase away evil, this evil is usually banished to the east. Today the Akigat is being used by some parish priests as a prayer of the faithful at Eucharistic celebrations. 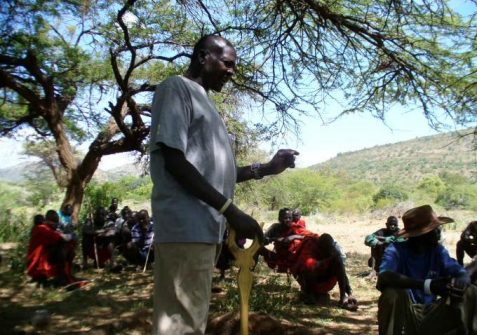 In the olden days it was typically traditional and only addressed to the gods, ancestors and spirits of the tapeth people but today the akigat is changing trends and instead of praying to the gods and ancestors, the tapeth now make their akigat to God. Whenever the people of tapac were faced with problems like an outbreak of a sickness in their homes affecting both people and their animals, the elders would gather by a riverside and ask for the intercession of the spirits, gods and their ancestors. They would take with them a bull for sacrifice to the gods and the ancestors so that they would intercede and rescue them from the illnesses. When the elders get to the riverside, the bull would be chased by one elder; when the animal began to run, the elder would then spear it from a distance and the purpose of spearing the animal was so that it should not spill a lot of blood.
The blood would instead flow inward in the stomach from where it would be collected after the animal was slaughtered. 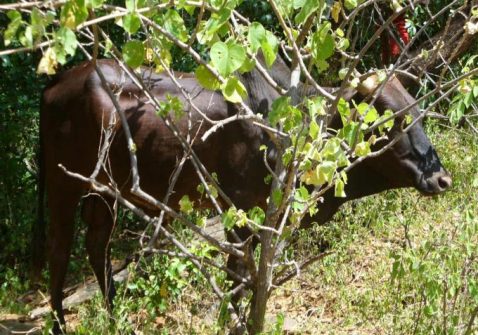 When the animal collapsed to the ground, the elders then slaughtered it and collected all the blood in a container. Some of the blood was then drunk raw by the elders as part of the ritual while some of was given to the gods when it was sprinkled on the trees, grass and the nearby area.
In the sprinkling of the blood and the nyikugit,the blood is removed from the stomach of the bull around the area were the akigat will be said, and is a sign of sacrificing to the gods. After sprinkling the blood, one elder will then stand up and begin petitioning the gods with their requests which could be to take away sickness from people or animals or chase away evil from their community. 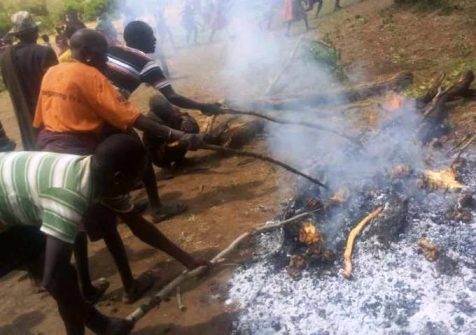 During the prayer, the prayer leader asks the gods to take all the evil to the East and the rest respond ‘let it be’. This prayer is repeated until all their requests are completed. If it is sickness, they ask the gods to take the sicknesses to the east. And for rain, they ask the gods to bring them rain and for evil, they ask the gods to take it to the east.
The elders say that the akigat is a strong way of asking the gods to come to their rescue and their prayers were always answered.
If there was a disease outbreak among the people it would disappear; if it was among the animals it would also disappear and the animals would not fall sick again.
After the prayer is completed, the elders gather together roast meat from the bull, cook some of the blood that remained and then serve the local alcohol agwe, and all are invited for a feast which is expected to begin after the prayer.
At this feast, women and children will be invited to join though they are not allowed on to the ground where the prayer is taking place.
Today the Akigat is performed by the river-side and only happens in very remote areas towards the eastern part of Tapac.