A moment of exuberant celebrations, which are traditionally associated with thrilling music that leads to dance. An event during which the traditions and customs of the many local ethnic groups meet to celebrate the past and look at the future with hope.

Trinidad and Tobago are the two islands that form the small Antillean archipelago; the first one is the best known, among other things also for its colourful carnival. French settlers, who began to arrive in 1783, brought slaves and introduced Carnival to Trinidad. The celebrations of these well-to-do planters emphasized elegant costume parties and dances. Later, in 1802 the island became a British colony. Around the middle of the last century, the Trinidadian carnival became one of the major tourist attractions of the modern Caribbean, when the artists performing at the event acquired international fame.
Today, as well as being an important expression of art and local folklore, the Trinidadian carnival is also the occasion during which the traditions and customs of the several ethnic groups of the island are staged during a whole month of celebrations. The aim is to entertain the population, giving the locals a feeling of cultural belonging, and to attract visitors, tourists and party lovers under the fantasy banner. 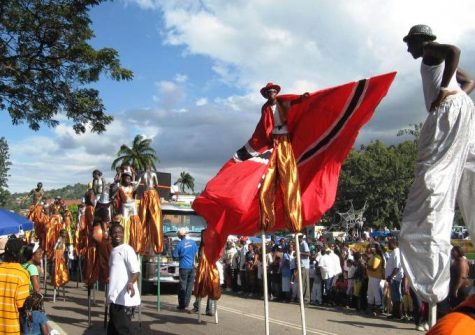 Between February and March, when the carnival reaches its peak, life becomes hectic in the chaotic capital of Port-of-Spain, and in the night, the music is played at full blast everywhere, along the streets, in the bars, in the shops, in the maxi-taxis. Vibrant calypso music shows the picture of these celebrations completely. It can be interesting, to those who like Caribbean food, to know that the carnival celebrations in Trinidad include food fairs where one can taste local food and drinks. Officially, the carnival celebrations start with the election of a youth ‘Prince and Princess of Carnival’. The inhabitants of each neighbourhood  of Port-of-Spain attend the celebrations wearing masks and elaborate costumes. Visitors and Trinidad natives alike are welcome to join one of the many Carnival ‘Mas Bands’ (short for Masquerade bands) 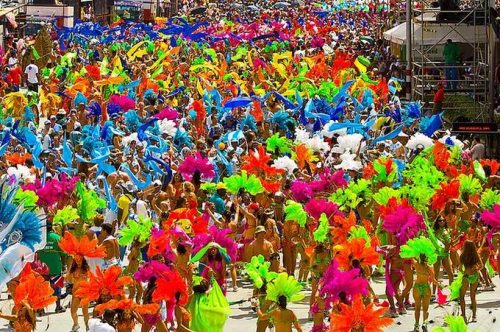 When one marches with one of the Carnival bands through the streets of Port of Spain it is referred to as ‘playing mas’ and means one will be wearing the band’s elaborate costume while dancing through the streets to the island music. Each mas band can count as many as  7-8 thousand people forming a huge multicoloured procession, who follow the floats laden with music boxes emitting soca and calypso music. The huge crowd dancing along the streets forms a real walking theatre, with traditional and fantasy characters, while musicians and steel bands (groups that play metal cans) have jam sessions. A real apotheosis of calypso music. 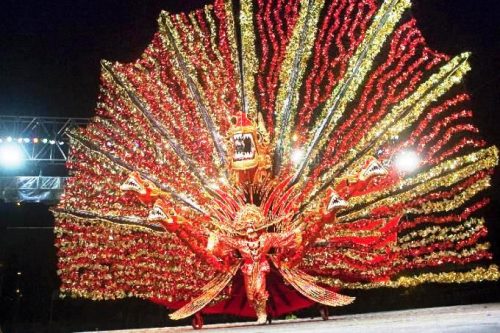 Preparations  for carnival begin on New Year’s Eve in Trinidad. New costumes are made, singers for the event are selected, and bands rehearse. Artists perform in concert halls and theatres, called ‘tents’, Inizio modulowhere a jury elects the finalists. ‘Musicals’ are also performed during the carnival celebrations. This type of performance combines acting, pantomime, parody, songs and audience participation. The festival reaches its peak between Carnival Monday (joo vay) and Shrove Tuesday (vaval), with people that sing and dance in the streets dressed in sumptuous and colourful costumes. Visitors in Trinidad  should not miss the ‘Children’s Carnival’, held on the Saturday before Shrove Tuesday. Tranquillity returns to Trinidad only at the crack of dawn of Ash Wednesday.

Steel drums or ‘pans’ probably originated in Laventille, an economically depressed suburb of Port of Spain that was settled by freed African slaves in the mid-1800s. African and East Indian drumming evolved over the years into percussion ensembles of young men, who paraded in the streets during Carnival and other celebrations beating mainly skin-headed drums. In 1884, when the British banned drumming during Carnival parades, these drummers turned to hitting bamboo tubes. Called Tamboo Bamboo, the performers were thought of as drummers because the word ‘tamboo’ is the patois pronunciation of the French word, tambour, ‘drum’. Some competing bands became violent and fought using the bamboo as weapons forcing the British to outlaw their use in parades in 1935. 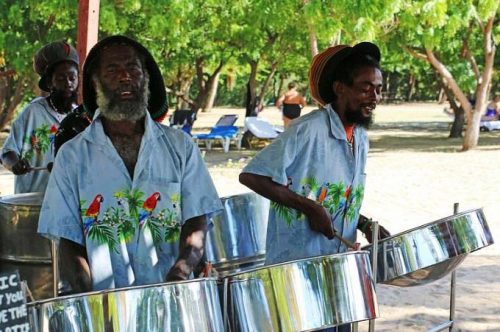 Also during this time, Carnival marchers had been using garbage cans and other metal pans as a substitute for skinned drums. After bamboo was prohibited in 1935, metal cans remained part of the parade and eventually were incorporated into large percussion ensembles. These instruments included garbage can lids, automobile brake drums, pots and pans, dustbins, and biscuit tins (large square cookie cans). Known as ‘steel bands’, by 1935  these groups had the distinct advantage of being much louder than bamboo bands. Often percussionists would push the bottom of the can out, making it convex and producing a better sound when hit with a mallet. Two people had relevant influence on the development of the steel drum: Winston Spree and Elliot ‘Ellie’ Mannette. In 1937, at age 7, Winston was experimenting with creating multiple notes on convex cans. At the same time, at age 10, Ellie Mannette began examining Winston’s ideas. When a friend returned a loaned drum to Ellie it was beaten so hard that the can’s bottom was now concave. As he began hitting the can’s bottom back to a convex shape with a small stone, each time he hit the dent it would make a pitch or musical note. That is how the ‘steel bands’ were born (today the expression designates the percussion groups of the Antilles, in particular the artists of Trinidad). Some of them have marked the history of this genre, such as the legendary Tapso (Trinidad All Steel Percussion Orchestra), which performed for the first time in public in 1951, under the direction of Lieutenant Nathaniel Joseph Griffith, originally from Barbados, director of the Trinidad police band. 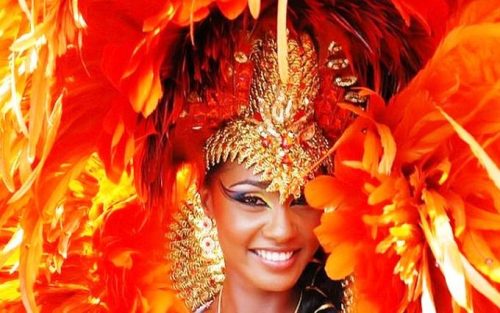 Today, as then, the great orchestras that accompany the singers maintain their traditional structural and sound balance: in addition to the pan, these musicians play flutes, clarinets, guitars, maracas, cuatros (four-string guitars, of Venezuelan origin), double basses and, sometimes, violins. The success and the skills of these ‘metal orchestras’ have grown enormously, also thanks to the improvement of the manufacturing technique of the pans. Today’s steel bands can play up to two hundred metal drums, which, tempered in different ways, produce all kinds of sound (bass, alto, counter-singing) and extreme melodies.
Calypso music and Trinidadian carnival are rooted in the political and social history of the small Caribbean island. In the 1930s, Trinidad flourished thanks to the development of the oil and tourism industry and the North American naval bases. Also in those years, talented calypsonians gained international fame, such as Wilmoth Houdini and Walter ‘Chieftain’ Douglas. The latter is credited with having introduced the so-called ballad calypso, a rhythmic musical composition with long narrative stanzas.
In the same period, the government authorities of the small Antillean archipelago censored those calypso songs that were considered too indecent or subversive. But in some songs of the most famous calypsonians such as Egbert Moor (Lord Beginner), Raymond Quevedo (Attila the Hun), Neville Marcano (Growling Tiger), Rafael De Leon (Roaring Lion),   remain the literary and musical quality of a genre that, over time and despite everything, got refined, and whose texts have become open to international topicality and whose music has absorbed elements of jazz and other Caribbean and Latin American music. In addition to costume parades and singing competitions, the ‘pan contest’ cannot miss in a Trinidadian carnival. To this day, the calypso competition is the most popular among the islanders. Besides, for almost fifty years, an international steel band competition has been held in Port-of-Spain, which now has become very popular in the English-speaking Caribbean, and even among  the Antillean communities who have emigrated to the United Kingdom and the US.
Furthermore, the ‘Carnival Road March’, that is the musical composition played most often at the ‘judging points’ along the parade route during Carnival, must also be included among the other musical competitions of the event.The ‘Road March’ title is among the most prestigious in the Trinidad Carnival.