The desert is not a no man’s land but the land of nomads. The best known among these are the Tuareg, also called the ‘blue people’, in reference to the colour of the veil (tagelmust) with which the men cover their faces, or ‘desert warriors’, in reference to the sword (takuba) they carry. A glance at the lives of two groups: the Kel Aïr and the Kel Ahaggar.

The Kel Aïr live on the mountainous massif of Air, situated to the north of Agadez, in Niger. The Kel Ahaggar live in the mountainous region of Ahaggar, in Algerian Sahara. Each year, in September, at the end of the rainy season, the men of the Kel Aïr group start to move. They travel about 300 km towards the east, in the direction of the city of Bilma where they stay until November, exchanging their agricultural and animal products for dates and salt. From there they move to the south, towards the Hausa states, in northern Nigeria. 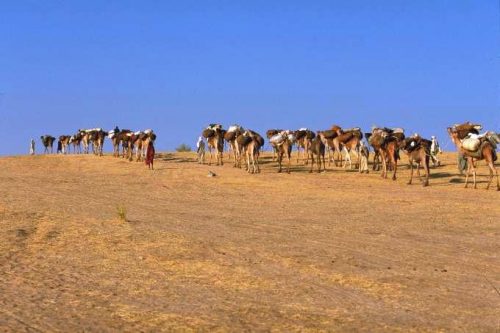 The journey south is about 900 km. They reach Katsina, Maiduguri, Kano, Zaria and Kaduna around January. This is the moment when they stand to make the largest profit. Among the Hausa, salt is a precious commodity. It is the Tuareg who fix the price and perhaps for this reason the nomads are considered rich by other groups. Dates are also very much in demand and sell well. They use the money they receive to buy millet, the staple food of the Tuareg, and luxury items such as jewels and fine cloth.The Hausa region is very fertile and suitable for producing camels. This is why the Kel Air stay there for three long months, allowing the camels to give birth and their calves to grow and become strong enough to join the caravan for the journey home in the month of April. They reach Air in May, at the end of the dry season, when the millet purchased the preceding year is about to run out. The new provisions bring joy to all. 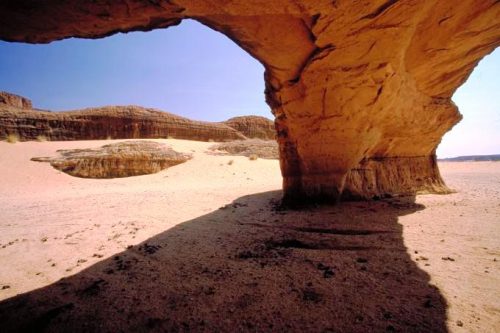 The Kel Ahaggar, instead, undertake two journeys. The first is to the north, towards the Tidikelt reg (plateau), rich in oases. It is a difficult journey even for expert caravaners like the Tuareg. They travel over 750 km of open desert and they have to take enough fodder for the camels. Once they reach their destination, they exchange the products of their livestock for dates, cloth and various products from Europe. In December they return to Ahaggar. The second itinerary is much longer, over 1,200 km, and brings the caravaners south into Mali and Niger.
They break their journey at Amador, in the homonymous wadi, to buy salt. They then resume their journey towards Agadez where they can exchange the salt for millet imported from the south by the Kel Air, or towards other Mali commercial centres to sell the precious mineral without intermediaries. 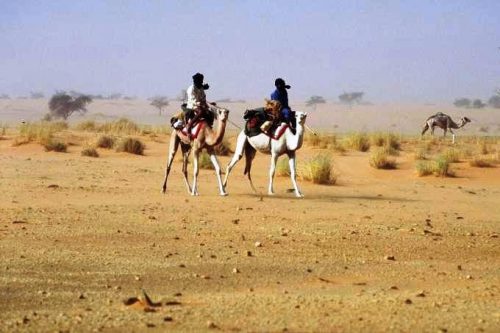 Both these groups have close relations with the farmers of the southern regions. After the harvest, the farmers allow the nomads to graze their herds in the harvested fields with the benefit of plentiful manure for the land. On their part, the nomads are happy to see their camels freely grazing in abundant pastures, regaining their strength for the return journey. This is why the caravans always leave home at the beginning of the dry season when food for the camels is becoming scarce, returning only when the dry season has ended.
Due to the great value attributed to salt, much more than that of millet, the Tuareg, once they have concluded their business transactions, always manage to have a considerable surplus of this cereal. With one load of salt, the Tuareg may obtain up to 15 loads of millet. They therefore return with plenty of millet and sell a considerable part of it to the inhabitants of the various oases along their return journey.
All this confirms the fact that the Tuareg dominate these commercial exchanges, especially since it is they who establish the price of the merchandise exchanged.

The Kel Air grow wheat, maize, barley and some legumes. The climatic conditions (mid-mountain) are very suitable for horticulture. The land is fertile, the climate is mild and the rainy season is regular. Besides, each family has a well where it gets water for the garden. Wheat, barley and vegetables do not only constitute the food of the caravan menagerie but also provide the caravan with supplies and the ‘currency’ with which the Tuareg buy dates and salt at Bilma.  Once they have obtained a sufficient quantity of dates and salt to take to the Hausa to be exchanged for millet, the rest of the income from the sale of their garden produce is used to buy animals, especially camels. 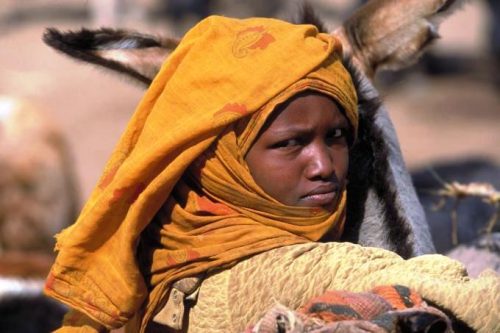 The geographical situation of the Tuareg who live in Ahaggar is that of an area of high mountains where the temperature is lower than in Air.  There, horticulture is very difficult and is therefore not as important as in Air. The Kel Haggar concentrate their efforts on caravan trading and raising livestock in order to make a living.
Tuareg society is characterised by an exact subdivision of work. While the men see to the organisation of the caravans and the long desert journeys, the women, besides looking after the children, must also take in hand the raising of livestock. The latter occupation often obliges them to live in small mobile camps so as to follow the animals to the different grazing places.

While both sheep and goats thrive in Air, in the dry and cold Haggar, instead, the livestock looked after by the women is mostly goats, the animals more capable of adapting to the difficult conditions of the place.
However, neither of these regions ever has too much fodder for the animals and it is not always close at hand. In particular during the dry season, the women themselves are often forced to gather the last leaves of the bushes or to knock down with long poles the wild berries of some plants for the animals to eat. 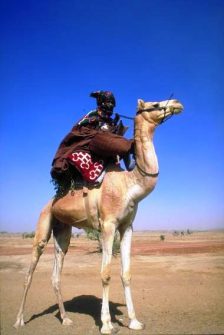 The presence of abundant sheep and goats in a village or an encampment is synonymous with survival. In order to guarantee sufficient food for a year, a single family needs a minimum of 10-15 animals to sell in Bilma (together with the garden produce), so as to get enough money to buy millet from the Hausa. Other animals are slaughtered to complete the diet (both for those who stay in the village and those who travel) and for the production of water skins, without which it would be unthinkable to attempt to cross vast desert regions such as that of Ténéré, or to undertake a journey of more than a thousand kilometres to reach northern Nigeria.
Any milk surplus to the needs of the family is used by the women to make a sort of cheese called takommar, which can be kept for several months. It has an excellent taste. By mixing this cheese with dates, millet flour and water, they make eghale, a very nourishing drink which can also be conserved for months in skins or other well sealed containers. Because it is so nourishing, this drink probably constitutes the most important item in the supplies of a caravan with a long journey to make. Neither must it be forgotten that eghale sells well in Bilma. 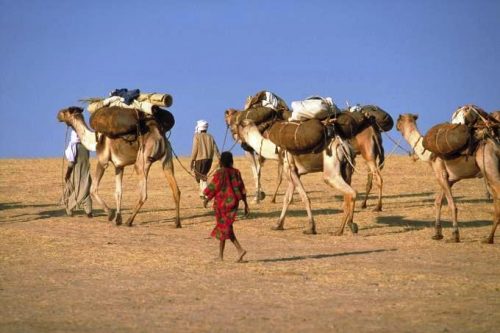 A camel is always a marvellous sight. It is wonderful to see how these animals have adapted to life in the desert.  A camel can walk the hot sands of the desert for two weeks without drinking a single drop of water. As well as that, this animal gives the two Tuareg groups under consideration the most economic means of transporting salt and dates. The lorry might be an alternative to the camel but there are not many Tuareg who could afford to buy one. Despite the advent of important lines of communication, thanks to which active and profitable trade is being developed, for the Tuareg who live in Air and Haggar, the journeys on the backs of dromedaries are still the most gainful.
In recent years, because of the Boko Haram Islamist group in northern Nigeria, the journeys of the Tuareg to those lands are now very few. This has endangered the lives of entire groups and for this reason the Tuareg have sought new pathways in the desert. The unstable situation in the north of Mali has also caused a reduction in the number of caravans and many young Tuareg, now in poverty, have been obliged to either join various rebel groups or to emigrate. (S.S.)