Sangomas, the South African traditional healers, mainly work in the rural areas of the country. Since 2007, they have been legally recognised in South Africa as ‘traditional health practitioners’. They have a large clientele and claim to be able to treat AIDS and cure bronchitis or asthma by using plants and bones of animals.

The room where we meet her is about three square metres and is full of different kind of plants and herbs, some of which are placed on two shelves, and some others are piled up messily on the floor. Opposite the door, the skin of a snake and those which may belong to a giraffe and to some kind of feline are hanging from a string.
Ngungune Michonto, is a 63-year-old woman with a cheerful look. Her hair is wrapped in a green sarong.
“A sangoma is like a doctor. We can cure many things: headache, chest pain, knees, we can treat cancer … We make medicines with plants and bones of animals”, she explains in a Zulu language. 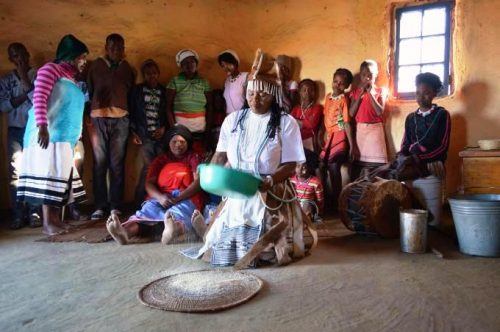 She tells us that her real name is Sina Maboso and that Ngungune Michonto is her name as a sangoma. She lives in Jim Brown, a small town in eastern South Africa, a few kilometres from the Kruger which is a South African National Park and one of the largest game reserves in Africa. “My older sister, who also works as a sangoma, taught me, when I was still a child, how to interpret the bones of animals, to understand what the patient’s problem is and to use herbs and plants to heal health problems. Learning all this may take five years, or just one, or only a few months if you are very intelligent”, she says.
It is difficult to have reliable figures on how many South Africans prefer to consult a sangoma instead of being visited by professional doctors trained in Western sciences. According to a report published in February last year by the local newspaper The Daily Maveric, 80 percent of  South Africans, some 46 million people, may have consulted one of the 200,000 sangomas currently working in the country. According to other sources instead, only 3% of the population, just over 1.5 million people, use traditional healers as their primary source of health care.
All sources, however, confirm that traditional healers operate only in rural areas.“Many people come here to be cured. I usually receive from five to ten people every month. 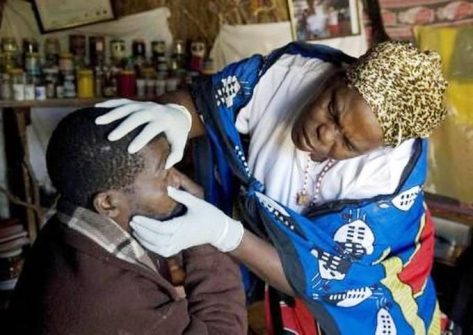 There are other sangomas in this area and they also have many patients”, says Michonto.HIV/AIDS is the most serious health concern in South Africa. The country has the highest number of people afflicted with HIV than anywhere else in the world. Around seven million people are affected by HIV in the country, the equivalent of 19% of the adult population of the country, and there are more than three million orphaned children, many of them because of AIDS. People infected with HIV, who are from rural areas and whose education rate is low, often go to traditional healers to be cured. Michonto says: “As for HIV we operate like for the other diseases, we prepare medicines for our patients with herbs and plants. Look… these are used to treat HIV” she says, showing some dry red leaves and other herbs. “It takes me between two weeks and one month to prepare the medicine for a person affected by HIV, and the person needs the same period of time to heal”. “But are they healed after taking the mixture of herbs you give them?”, we ask Michonto. “Well…, if the person doesn’t get better, I suggest that they consult another sangoma or they go to the government hospital, in order to see if they can be cured there”.

Status and recognition
Sarah Magodwen, Yupini, Luandle and Mahlala, live in Mkhulu. The first two are sangomas by family legacy. The other two are studying to be. “We want to learn to solve health problems by using traditional medicine. I think we will need at least six months to learn about herbs and animal bones’ properties”, Luandle explains.
Magodwen says that they receive about 15 patients a month and that in their school people study all the subjects that sangomas are supposed to know: divination, preparation of medicines with plants, control of ancestral spirits, cult of foreign spirits, drumming, ancestral dancing and training of new professionals, and she adds that all this is done within the most absolute legality. 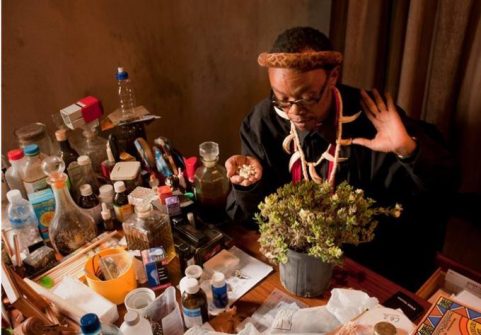 Sangomas are legally recognised, under the Traditional Health Practitioners Act of 2007 alongside herbalists, traditional birth attendants, and traditional surgeons.  The act of 2007 called for the establishment of a national council of traditional health practitioners to regulate and register sangomas in the country. According to this law, sangomas must be South African citizens and be positively qualified in the schools of sangomas in order to be legally recognised and have permission to practise as sangomas. 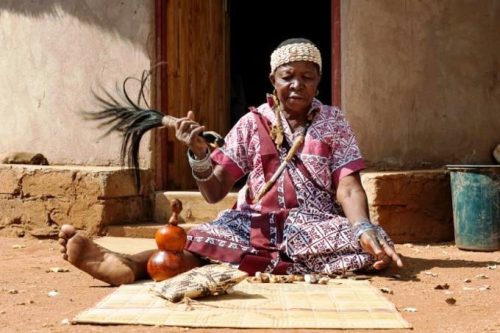 Sarah Magodwen, sangoma and teacher in the Mkhulu school says, “We operate in the same way they do in hospitals, the difference is that we use  traditional medicines. We know that many of the trees that grow in South Africa, almost all, have a highly medicinal use. But it takes a long time to learn to recognize each species and their properties and how to use them”, she explains. “I have a remedy for almost all diseases, but we mainly cure  bronchitis and asthma …”. As for HIV, Magodwen is more cautious than Michonto: “We don’t have a definitive cure, we are still looking for it. I’m sure we only need bones and plants … and learn how to mix them well. For the moment we can only give relief to those who are affected by this disease, as government doctors do, but still we are not able to defeat it”.