The glowing coals give off a wonderful aroma: the smell of the incense fills churches, temples and baths. The best sort comes from Somaliland. Entire villages earn their living from the sale of the precious resin from the trees.

The stony path winds down along the slope. It passes through the beds of dried-up streams and all the land around is dry. The hard, sharp-pointed thorns of the bushes cling to one’s clothes and scratch one’s arms.Said Ibrahim Ahmed effortlessly avoids the thorns. Sure-footed, he rounds the enormous rocks. The man is wearing a wine-red macawis, the traditional skirt of Somali men. Over his shoulder, he carries a bucket fashioned from a plastic container. He is heading for various small trees that grow on the slope, their roots gripping the cracks in the rocks. The narrow trunks are covered with scaly bark and the spares leaves are similar to those of mimosa trees. Said finds what he is seeking: small grains of resin attached to the tree. With his spatula, he scrapes off the grains and lets them fall into his bucket. “This is Maydi, the best incense in the world.  The tree on which it is found grows only in this place, here on our mountains”. This, then, is the legendary incense that has always had a mystical, even divine aura: it still enchants today with its incomparable perfume both sensual and exuding purity. 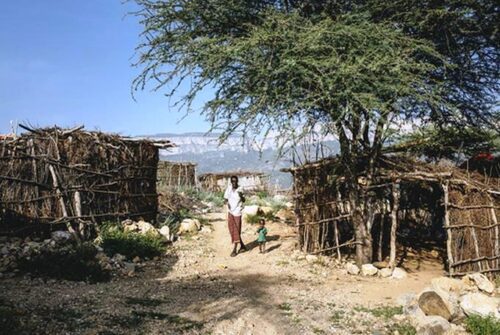 Incense was first appreciated 5,000 years ago in ancient Egypt. There the resin was offered in the temples and used to embalm mummies and to make cosmetics. In the south of the Arabian Peninsula, the miraculous substance brought an economic boom about 2,500 years ago and the merchants brought it to the entire ancient world. The nameless grains were worth their weight in gold.
In Madar Moge, Said’s village, all of the eighty families earn their living by selling the resin. Every family in Madar Moge has its own trees that are passed down from one generation to the next.
Said owns about 350 trees. He can prune them up to ten times a year and each time obtains from two to five kilos of resin. Said leaves his grains to dry in a cave on the edge of the village. He then packs the grain in bags of fifty kilos each and takes them to the village cooperative. He is paid about six dollars per kilo.
All incense transactions are made in dollars. The buyers then transport the goods to the merchants in Erigavo, the local capital and the largest city in the region of Sanaag in Somaliland. The incense trees, of the Boswellia genus, grow in the Horn of Africa, in the south of the Arabian Peninsula, in the Sahel region of western Africa and in India. There are noticeable differences between the resins of the sixteen different species of Boswellia. The resin of the Boswelliä carterii, present in Oman and Somaliland, and of the Boswellia frereana, which only grows in Somaliland, is the only resin that is marketed. Due to its high quality, it is called ‘The King’s Incense’.
Somaliland exports more than 3,000 tons of resin annually, Bark-had Jibril Hassan estimates. The corpulent forty-year-old man, known to all as Barkhad, is the main exporter of incense in Somaliland. At a price of 20 dollars per kilo, the state enjoys an income of around 60 million dollars per year. The resin is the third-largest item of export of the country after cattle and camels.
The headquarters of Barkhad’s export company is based in the capital Hargeisa and also manages the different warehouses in the incense region, 500 kilometres away. Barkhad is the largest employer in the region and also its biggest donor. Together with his best customer, the US doTerra company which deals in vegetable oils, he is building the first modern hospital at Erigavo. 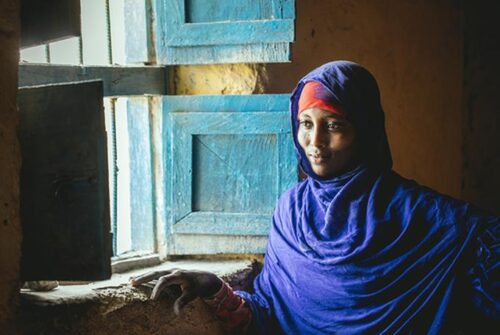 Thanks to incense, Barkhad has become one of the richest men in the country. He owns hotels and apartment blocks in Hargeisa and Berbera and is considering building a business centre. The real estate market in Somaliland is rapidly expanding and the economy of the former British colony is growing – despite the unfavourable conditions. Somaliland has been struggling for independence and international recognition. “The juridical uncertainty discourages international investors”, the businessman explains.
Somaliland is an archaic society, closely tied to the clans. Unlike Somalia, the country has succeeded in preventing the spread of Islamic fundamentalism and in keeping terrorist movements at bay.
For years it has had proper elections and functioning democratic institutions, as well as a stable currency.
Erigavo is the centre of the incense business and has about 100 merchants. They buy the resin in the villages and sell to wholesalers and exporters like Barkhad Jibril Hassan. The city shows no signs of its economic importance. Simple houses of stone and corrugated iron sheets stand in lines in this dry and treeless country, with only a few asphalt roads. The wind continually stirs up clouds of dust and sand. 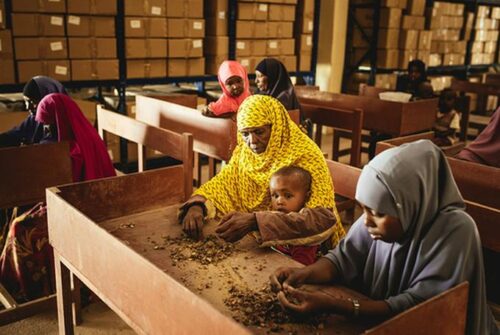 Besides commerce, the processing of incense is an important industry in the city. “All sorts of incense are brought here in the same kind of sacks “, Lul Said Jama tells us. He is a team leader at a sorting shop that employs twenty-five women. In the dark, central room, sacks of incense are piled up against the wall. Six women, dressed in coloured hijabs, sit cross-legged on the floor with a piece of wood fibre or cardboard on their laps. They carefully break the fist-sized balls of resin and remove the bark, grains of sand, stones and other impurities. They then arrange the pieces of resin in order of size: small, medium and large.
The young women do piecework and are paid about forty cents per kilo. The work is hard and demands patience and precision. Even the best workers rarely do more than five kilos a day. Nevertheless, many women want to work as sorters in Erigavo.
We met Sultan Ali Yusuf Abdi in a cafe near the mosque in Erigavo. “Incense is a gift from God “, says the fifty-nine-year-old Sultan who has a seat on the regional council of the elders and advises the governor of the province of Sanaag. “Collectors and sorters, packers and merchants – at least 100,000 people in Sanaag are involved in the incense business. We have to do our best to preserve the forests because without incense we are condemned”. 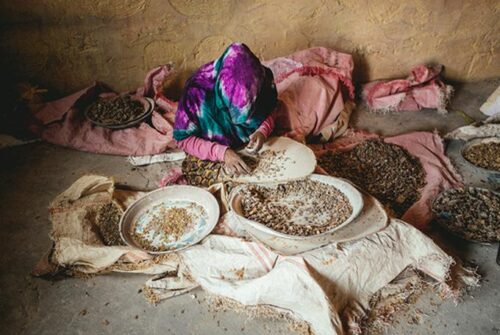 In fact, this precious resource is in danger. Climate change and over-exploitation threaten the incense trees. Without preventive measures, they will be reduced by half in the next fifteen years, warns ecologist Franz Bongers of the Dutch University of Wageningen, who has made a study of the reserves of Boswellia in Ethiopia. In fifty years, Ethiopian incense may have completely disappeared.
The production of incense is also threatened in Somaliland. There have been two periods of drought in recent years. In their anxiety, the peasants have been trying to gather more incense. They were reluctant to let the trees rest, cutting them in too many places. As a result, many trees, already weakened by lack of water, have dried up and died.
A further problem is population growth. “Trees that once belonged only to my father I now have to share with my three brothers “, says Said Ibrahim Ahmed”. This is not enough to feed all four of our families”. 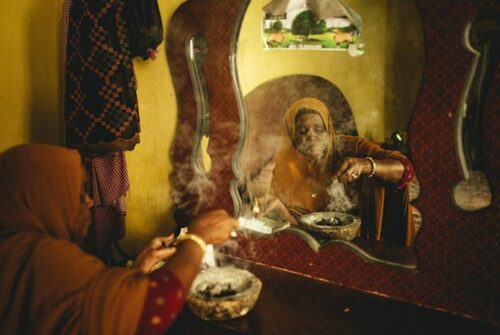 Meanwhile, international demand for resin from the Boswellia trees is increasing. The incense is not only used for religious purposes but also in the production of perfume, cosmetics and medicine. The Boswellia acids found in the incense are especially interesting: they inhibit inflammation and are considered very promising active ingredients in the treatment of arthritis, asthma and skin diseases.
“Incense is undergoing a revival due to the industry of luxury goods”, confirms Rene Csuk, professor of chemistry at Martin Luther University in Halle-Wittenberg (Germany).
Wholesaler Barkhad Jibril Hassan is happy with the increasing demand. But even he knows that that this boom threatens available reserves. “The only way out is to plant more trees!” But the Boswellia is extremely capricious. Often the seeds do not germinate. The farmers of Somaliland even believe that the trees cannot be cultivated. But in Oman, the incense exporters have already started small plantations and are waiting for the trees to reach production age. Saudi Arabia also forbade the export of raw resin some years ago. Since then, it is processed locally and made into oils and curative products. This guarantees jobs and creates added value. Barkhad Jibril Hassan is well aware of this: “We must follow this example!”