The most direct cause for the decrease of wildlife population is poaching. Rhino poaching is pulled by the Chinese demand for horns which is based on traditional use in oriental medicine and on ornamental use for making carved handles for ceremonial daggers.

The demand is such that the average retail price of a rhino horn can reach $ 65,000 per kilogram which is more than the value of gold or cocaine! Despite radars, in 2013, 606 rhinos were killed in South Africa’s Kruger National Park. Poachers are well equipped. They use helicopters, shoot the rhinos from the air and then land and cut the horns with a chain saw. The whole operation only lasts a few minutes, tells Baudouin Michel, of African Parks which manages 16 national parks on the continent. Criminal networks are operating worldwide seizures and arrests have occurred in Tanzania and in Kenya but also in Australia, Hong Kong, the Philippines and the USA.
Ivory is very attractive to Sudanese groups, since there is still a domestic ivory market in Khartoum, while the coasts of Eritrea and Somalia offer innumerable means of export in dhows to middle-eastern entrepôts. Kenya is a principal exit point for ivory exports, as reveal the United Nations Office on Drugs and Crime while Nigeria has become also an important ivory trafficking web. The high demand of rhino horn has provided incentives to the Lord Resistance Army rebels who use wilderness areas as sanctuaries. In West Africa, jihadists are increasingly involved in poaching activities.  In a few years, the jihadist frontline moved one thousand kilometers to the South and reached the Pendjari National Park where two French tourists were kidnapped in May 2019. Jihadists are now present in the W and Arly national parks in Burkina Faso and Niger.
The LRA of Uganda which has been for many years hiding around the Garamba National park in the Eastern DRC and is held responsible for the extinction of the world’s last population of wild northern white rhino, is now active in the nearby Bili-Uélé Reserve.
Sudanese Janjaweed militias have mounted elephant poaching raids into Chad, the CAR and Cameroon, where they massacred 450 elephants in the Bouba N’Djida National Park, in 2012. Ugandan army units killed elephants and rhinos in the Garamba national park and removed the trophies by helicopter says the EU report. 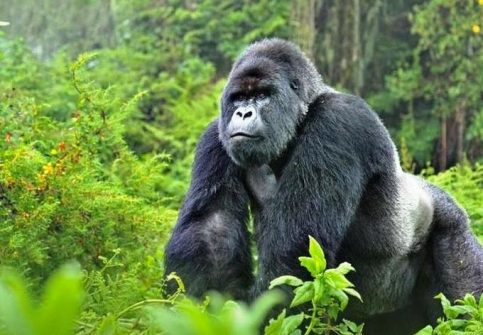 The hunting of wildlife for ‘bushmeat’ is another major threat. Up to 4.5 million tons of bushmeat are extracted annually from the Central African forests. The two main methods are the use of shotguns particularly to kill monkeys and the use of steel-wire snares, made of brake cables for bicycles, for terrestrial species, which are very wasteful since they are unselective in what they catch.
According to Trefon, most of the demand comes from the city which is “a big open mouth”. “When you look at demographic and urbanisation prospects, we know that Central Africa, urban and rural population are equal but we’re heading towards a much greater urban population. So, these people need to have food. Meat imports are very low. Beef production ranching is very poor. So, we have the urban hunger for meat”.Besides, women from certain tribes who were not allowed to eat bushmeat in the past are becoming the fastest growing consumers category. Accordingly to Trefon, bushmeat is also consumed for symbolic reasons in Brazzaville where some men give gorilla meat to their pregnant women to give birth to big strong young men. Self-subsistence hunting represents now only a small part of the consumption. Restaurants and exports represent a fraction of the demand but the bulk is sold on the markets. (F.M.)

Uganda. Giving Away the Bride.

Chad / Mons. Miguel Sebastian, “Let us not be intimidated…