The Asmat people are a tribe in Papua new Guinea. They draw inspiration for their sculpture from their mythology which is the art for which they are best known. It is part of their nature and is a kind of sacred tradition.

The Asmat of Papua New Guinea in Oceania claim to be descendants of a god called Fumeripitsy, the ‘creator’. According to their mythology, one day this divinity descended from the invisible which is located over the horizon, beyond the sea where the sun sets each day. He came to earth on a mountain. He then began to walk around and had many adventures. As he passed close to the sea, Fumeripitsy was attacked by a giant crocodile and was seriously injured. Fortunately, a Flamingo took care of him until he recovered. 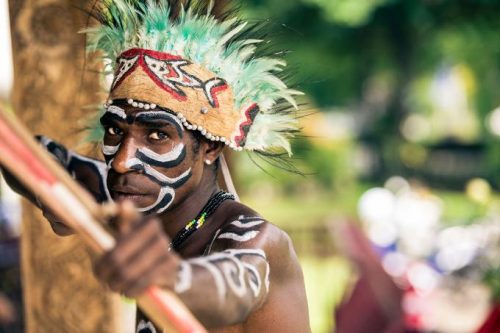 One day Fumeripitsy took some wood and built a house, carved two very beautiful statues and made a powerful drum. When he had finished his work, Fumeripitsy began to dance and the magical power that flowed from his movements gave life to the two statues. These were now the first human couple, the ancestors of the Asmat, and they then began to move and dance with their creator.

Sacred craft
The respect the Asmat have for their mythological roots is shown especially in their sculpture. It is more than a profession or a hereditary custom; it is part of nature itself and a kind of sacred tradition. All the members of this tribe are born with a predisposition for modelling wood and creating works of sculpture.
The most important object for the Asmat is the shield. When a male child is born a shield is made for him and he is given the name of an ancestor because they see this wood sculpture as a way of connecting the life of the newborn to that of the ancestors. 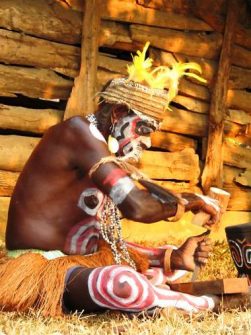 The Asmat also believe that the spirit of the ancestors, by means of the shield, make its owner invisible when he holds it. In this ritual we have, on the one hand, the transmission of life and the traditional values of the people, and, on the other, the new human being who must be prepared for the conflicts of life, not only with people, but also with malignant spirits. Their houses, too, are a work of art. They are made of wood, vegetable fibres, bark and leaves. They serve not only to house the living but they are also the home of the spirits of the ancestors, since it is only with their presence that the family may have good crops in the fields and be successful in hunting and fishing. Inside the houses there may be wood panels with images of ancestors. It is also the custom to refer to the myth of their origins by placing to one side images of crocodiles in an attacking pose and showing their teeth. 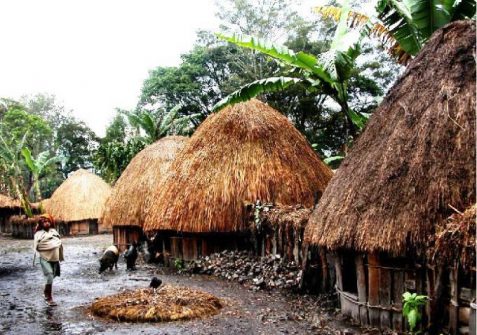 Hunting or combat weapons, boats and oars for fishing, food utensils, drums or jewellery and ornaments often used in ceremonies are other subjects of the art of the Asmat. They are not simply carvings. We must bear in mind that wood is a bond of communion with one’s ancestors since it is from wood that they originated.
Therefore, in the wooden boat resides the spirit of the ancestors which guides and protects the fishermen; the same applies to the bow and arrow. Ornaments also serve as amulets.

Sculpture and visual language
Carving is not just a mere manual ability among the Asmat. It expresses the spiritual and emotive intelligence of the people of Oceania. Just as in their mythology, human beings come from wooden statues to which the creator god gave life, enabling them to become a people; trees are icons of human beings and also of animals. When a father works on a piece of wood and demonstrates the art to his children, he teaches that the roots of the tree are the feet, the trunk is the body, the branches are the hands and the leaves are the head. Consequently, the carvings reveal the character of the beings represented and express their sentiments. 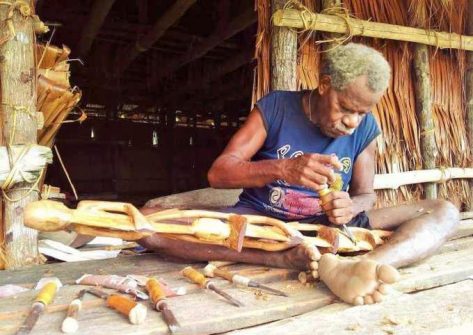 The Asmat live immersed in nature and are familiar with all its details. As a result, they usually carve directly, without experimenting. The sculptures are made mainly from the wood of three trees: sago, teak and mangrove. Their tools are simple: an axe to cut down the trees and bones or shells to carve the wood. Their works of art are painted in three colours: red, black and white, alone or combined. Each colour has a meaning: red mean flesh and blood; white means the bones; black refers to their skin. Colours are produced from natural ingredients. Asmat women are also to be admired for their skills, especially in weaving handbags. Every handbag tells a story. The colours and designs are a visual language.