The Panama’s sombrero pintao (painted hat) is worn during dances, parties and by farmers working in the fields to protect themselves from the sun. It is one of the most characteristic garments of the Panamanian folklore, and now it has become part of  UNESCO’s Intangible Cultural Heritage.

Although there is little documentation on the origin of this symbol of the central province of Coclé, there is some evidence dating back to the 18th and 19th centuries which is associated with the handicraft production of the indigenous people of the Toabré region.
Sombreros pintaos are usually made with natural fibres from plants such as rush, a type of reed, bellota or pita. The dark colour for the stripes is obtained from the chisná plant, whose leaves are boiled along with the fibres to be dyed. 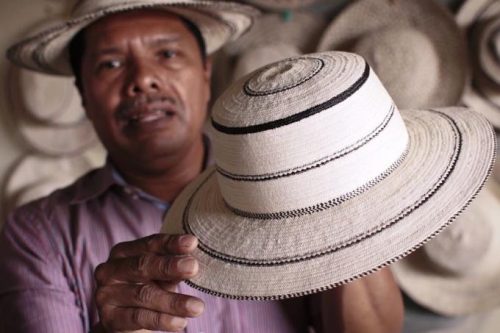 This whole process is handmade, using techniques passed down from generation to generation. The manufacturing processes vary qualitatively and quantitatively. These hats are made in a last, weaving thin fibres. The fineness of the hat is measured by the number of turns that are woven. The most simple hats show just 15 turns or even less, the finest sombreros pintaos show up to 24 turns. The more turns, the finer the hat will be. High quality hats can cost hundreds of dollars.
The shade of the colours can vary according to the region of the country, while the name of the sombrero varies according to the pints that are used for its manufacturing: the pinta mosquitoes hat shows  many black spots on the criznejas (braids);  the ñopito hat is totally white and, according to the buyer’s taste, can show some black patterns on one side of the hat cup; the junco is very resistant and made with natural junco fibre; the pintao’ is one of the most sought after. It is called ‘pintao’ not because it is made in La Pintada, but because it shows a combination of black and white spots. 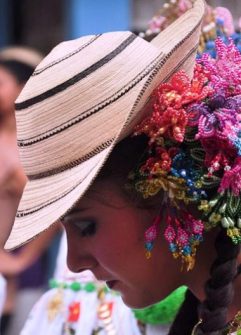 The pepita de guate (guate/nugget) is woven by alternating the bellota white braids with junco fabric in black colour. The sombrero de talco is similar to the ‘pintao’ hat, the only difference being that  it shows just one talc instead of two, while the tumba hombre hat shows a combination of black patterns in round shape on the template, cup and wing. In addition to these, there are other types of hats, such as the reatilla, and the talco encontrado.

Laborious process
Making a sombrero pintao requires complex work and much time, between one week and two and a half months. The work is distinguished in three parts, that regarding the template, that of the cup and that of the wing. Sombreros pintaos are completely handmade, up to six  craftsmen can work to make a hat, only natural fibres are used, not chemicals or synthetic ones; braids and designs are made manually, and are inspired by animals and plant vines, according to oral tradition. 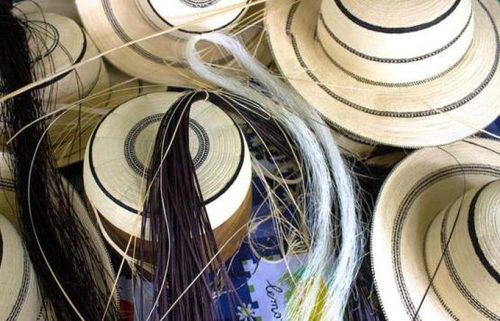 In 2011, the Panamanian government passed a law to protect and encourage the production of the sombrero pinta. Every year, on October 19, the Civic Day and Commemoration of the Sombrero Pintao is celebrated in the district of La Pintada, a district about 170 kilometers (105 miles) west of Panama City, birthplace of the sombrero pintao, in the province of Coclé. This hat is often worn by women from  the central provinces of Los Santos, Herrera and Veraguas, mainly on important occasions or festivities.The position of the wings can indicate the mood of the person who is wearing it, or if he is looking for a girlfriend, in the case of men. For example, the front and rear wings raised indicate compliance with current life and success. The front wing tilted
forward means mourning. 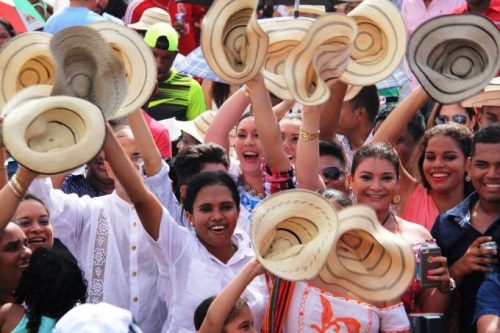 In 2017, UNESCO (The UN Organization for Education, Science and Culture) named the procedures and techniques for making the sombrero pintao in Panama as an intangible heritage of humanity: ‘The vegetal fibres to prepare the talcs, pints and cringes of the pintao hat are obtained by means of manual procedures using five classes of plants and mud. Hat smithing procedures and techniques are handed down from generation to generation and braiding contests are organized to encourage hatters to perfect their art’, the agency reported. The international organization, meeting in South Korea, valued the work of the more than 400 Panamanian artisans who perform the trade: ‘They grow the plants, they work the raw materials, they braid the fibers and make with them this type of hat that is part of the clothing of all the regions of the country in the folkloric dances and the community celebrations’. UNESCO also underlined that the practice of hat manufacturing promotes social solidarity and encourages the creation of cooperatives and groups of hatters and growers.