The continent of Africa is becoming one of the major transit hubs for the movement of drugs. In a report of the International Narcotics Control Board (INCB) stated that ‘With their experience in the field of contraband hashish and heroin, the drugs cartels of Western Africa are seeking new contacts in Latin America to extend the traffic of cocaine to the entire region of Sub-Saharan Africa”.

Again, this is a question of a fundamental change in the strategy of world narco-trafficking which sees Africa as one of the central areas for the distribution of drugs worldwide. Up to the early nineties of the last century, Africa was kept at the margins of drug routes. This change has come about due to the tightening of border controls as a result of conflicting national and international policies which complicated the movement of drugs along the traditional Atlantic and Asiatic routes.
The traffickers therefore selected Africa as the new transit point towards Europe, exploiting both weak security and the plentiful supply of fairly specialised low cost illegal workers.
In this context, the African coasts and ports have become the nerve centres of the transatlantic drugs trade which has now reached considerable proportions: In 2013, for example, it is estimated that 18 tons of cocaine passed through the West African hubs. 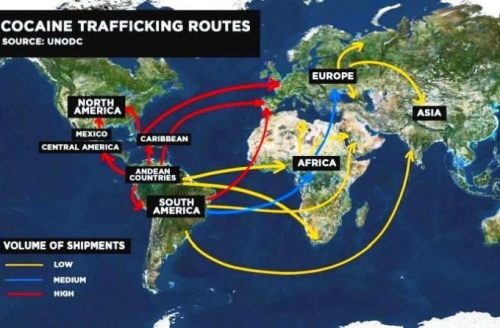 Furthermore, Africa is no longer just a place of transit for narcotics but also ‘virgin territory’ for drug dealing since the new middle class now being formed represents a new and rich market for the sale of cocaine and heroin. In this regard, the revealing data provided by the International Narcotics Control Board (INCB) show that Africa can be seen as an easy market not only as regards areas involved in the movement of drugs where there is a high degree of illiteracy, poverty and youth unemployment, but also among the newly rich class which, in some more developed countries, have become an attractive target. Within this target, in fact, it seems that the use of what in the jargon is called the drug of the rich, namely cocaine and heroin, is becoming more widespread, leading to an exponential increase in internal consumption. In this regard, the data furnished by the United Nations show that the average world growth in the spread of cocaine use (0.4%) has stabilised in a few years. Contemporaneously, the commitment of initiatives and social programmes does not seem capable of helping these drug addicts due to the shortage of rehab centres. 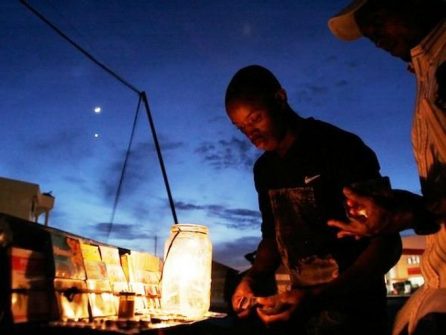 Cannabis, however, is still the drug most used in Africa, due also to its ease of internal production. Experts say it is used by 7.5% of the continental population by people between 15 and 65 years of age. This is high as compared to the world average of 3.9%. The percentage is especially high in Western and Central Africa where it reaches 12.4%.
It must also be remembered that, while the whole of Africa is teeming with all sorts of trafficking, some areas have started their own production and, totally independently, carry out the entire cycle of drug production, from production to supplying the markets, both local and elsewhere. This process is already an established tradition in Morocco which, even today, is one of the foremost producers of cannabis. In fact, the mountainous region of Riff in northern Morocco has, since the seventies, been an immense area devoted to the production of Indian hemp, maintained especially by European demand. In this area, as often happens in areas of South America or the Golden Triangle, there is a paradoxical marriage of poverty and riches which leads entire peasant populations to become workers on the plantations in order to earn the minimum necessary for survival. 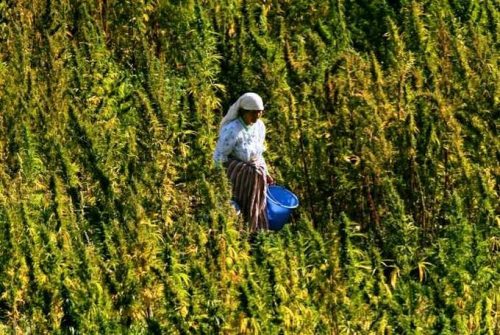 At the top there are the bosses: Moroccans, Turks, Tunisians, Spaniards and Italians who keep the business going, extending the hashish along the continents bordering the Mediterranean. In recent years the situation has changed. The laws of the Mohammed VI government, under the influence of the UN, have become more severe. A number of plantations in the area have been destroyed. Official UNODC figures show a reduction of as much as 50% in the area cultivated.
This, however, is of little consequence. Cannabis is still recognised today as the most widely cultivated drug in the world, but especially the one most in demand. The Riff area is known to be among those providing the greatest amounts at continental level.
The effects of the continual flow of narcotics are daily becoming more apparent on the African continent since drug trafficking is not only feeding corruption, political instability, the arms trade and clan wars but is also creating the conditions required to make the area in question the next large market for illegal drugs in the world. This is understandable if we bear in mind that the continent has a large population of young people, that its purchasing power is growing moderately and that the rest of the world international markets seem to be already saturated. (F.R.)