There is no place in Mexico where the cult of the dead is not celebrated with feasting and ritual. Among the indigenous peoples, the encounter with the dead is feast, ceremony, identity and reflection. A journey through some celebrations of the country.

In the heart of the land of the Tsotsil people stands San Pedro Chenalhó, a drop of ancient blood, profound and primordial, at the foot of the mountains that form the Chiapas plateau south of Mexico.
In this place, the women spend the day weaving as their grandmothers taught them. In their view, the weaver profession is divine and exclusive to women as mothers. 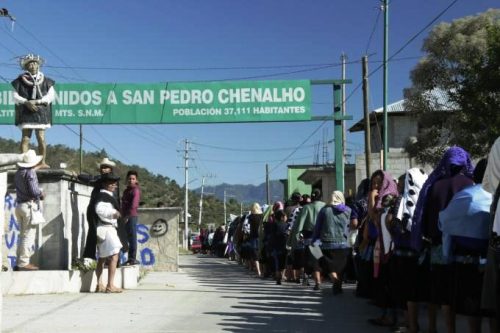 Here the souls of the dead are welcomed only on 1 November. Early in the morning, the men will have already slaughtered a cow to be used, together with the plants as an offering to the souls that return from hatibak (paradise) where they live for many years amidst abundance and youthfulness to return to the earth and be reborn.
In the darkness of the dawn, the sound of drums, the noise of fireworks and the chiming of the bells are meant to guide the souls on their return journey. This is where the local and traditional authorities come together to visit the sacred places. Dressed in gala clothes and holding the rod of authority, they pray at the feet of the three Tsotsil crosses and prepare to abandon their offices for twenty four hours to spend some time with their dear ones without any public duties to perform. Through dense clouds of incense smoke and to the sound of drums, the women walk in procession carrying images of Our Lady through the centre of the city; this is a journey of purification. 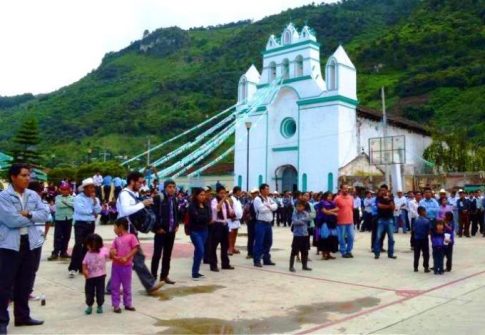 Chenalhó is ready to receive its dead: a rope tied to the bell tower of the church hangs down in a curve towards the three crosses in front of the door of the church of San Pedro. This taut rope will be used to sound the large bell and create an imaginary space, a separate ceremonial space where the souls of the dead may walk and speak as they did in life. This is the social and public space of the souls, of the Mictlán and of the land where the local authorities carry out their functions; seated on benches, they will spend the night ringing the bells and seeing to any problems that may arise during the celebrations.There is a tangible air of recollection and respect; the Tsotsiles talk among themselves and weep out loud for their dead. Unlike other places, here the feast of the dead (sk’in ch’uelelalo) is a reason for grief and sadness.

Narárachi. Running souls
To the southwest of the city of Chihuahua, surrounded by a magical environment, there is the city of Narárachi, a city in the commune of Carichi, within the territory of the Rarámuri people.
According to the ideas that govern their actions and their manner of relating to their environment, death is one of the most natural acts that they especially celebrate. 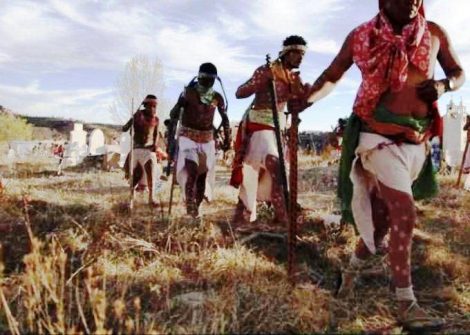 Rather than the Day of the Dead, here the moment of the departure of one of their own is celebrated. The church of Our Lady of Light is witness to the goodbye ceremony of the dead. The body, wrapped in a simple blanket, lies before the cross.
The people do not weep; relatives and friends conceal their feelings for they well know that the souls of the dead will go to heaven. With this in mind, they prepare all they need: water and a small bag of maize, roasted and ground, accompanies the body as provisions for the journey. On the stone tomb of the deceased a cross is placed on which hangs the necklace of the deceased person. Below the cross their belt and shoes are placed so that they can run well. Afterwards, a Rarámuri elder speaks some ritual words and the relatives go their ways certain they will never return to see the tomb. 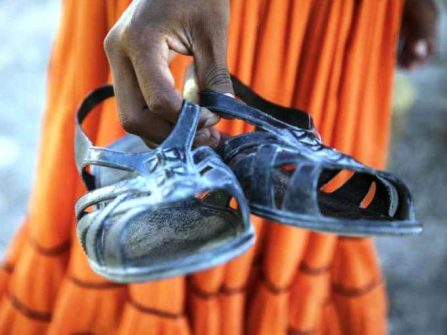 “This is our life”, they say in silence; and now they prepare for the great feast. The souls of the dead are reunited in heaven with their forefathers, the Rarámuri say; and they themselves are a reflection of life and death. For this reason, the living must accompany the dead to heaven, with the help of the entire community and so a feast is celebrated to bring the person into heaven.
The feast of the dead is always a distribution of food and tesgüino – a light beer made from maize. Due to the influence of this famous batari, the people dance outdoors crying ‘Goodbye, the soul is going away’. Celebrations of this sort are very quiet, particularly happy and full of humour. The young men and women show their running abilities to help the soul reach heaven. If the soul does not run towards heaven, it will continue to wander around the earth causing sickness. If there are night lights, illuminated birds or strange stones, it will be impossible for the soul to go up; to avoid the return of the dead, it is important to distribute the food before running for the soul. 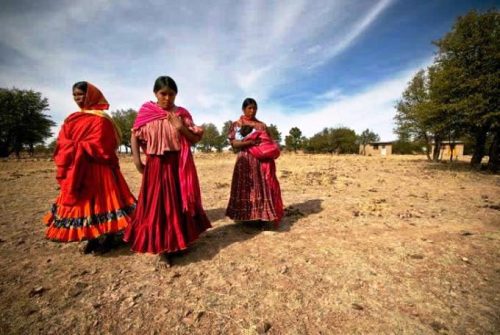 “We dance and we run to send the soul into heaven, and we do this several times a year. Here in our territory, we have no special feast day since, for us, many days are days of the dead. We live with this awareness, a union of vivaciousness and pleasure. We want to maintain a society of sharing and equality. We are fighting to keep our laws and promises”, the Ramuri say.

Pilgrimage to Tatei Haramara
On the central coast of Nayarit, the Wixarika people gather constantly throughout the year to adore ‘Our Mother the Sea, at the sacred place known as Tatei Haramara’.
The Wixarika do not celebrate the day of the dead but they believe death to be a sacred event. When a little one dies, rites are held for their transition to the underworld where they must arrive purified. In their cosmic view, the earth floats on the sea which they identify with the lower part of the world. 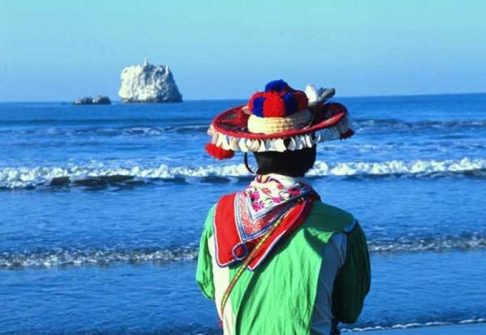 The great white rock called Waxiewe is the precise point of departure of the initiating journey of the gods that leads to the furthest end of temporal space. This place of cult is considered to be the house of Tatei Haramara; the monolith is believed to be the first solid object of the cosmos. The west (tat+ata), the sea and the coast of Nayarit are to be found in a dark area. This fact has a series of important implications. For one thing, it is here that the dead, or at least most of them, live. 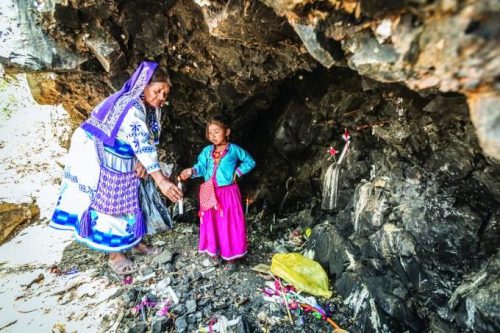 In this holy land there are ritual offerings left by them or by pilgrims of times past, both on the surface and the sea-bed as well as on the beach and in the sacred caves. Their offerings are thrown into the depths of the sea between the so-called ‘Piedra de la Virgen’ (Rock of the Virgin) and Cerro del Vigía, a lighthouse in the port of San Blas. Among the offerings made is the tzicuri or ‘Eye of God’, a cross made of rushes covered with wool which constitutes a symbolic replica of the homeland; many votive cups, carved or engraved stones, wax candles, pieces of chocolate and biscuits with animal symbols are also offered. 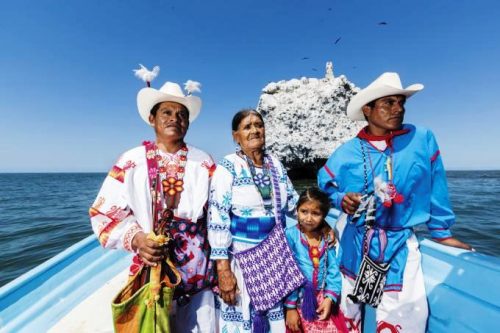 Like the Virgin Mary at Tepeyac, our Mother Sea chose this exact ‘sea hill’ to show her head and left arm. The sky is her hair adorned with clouds and birds; the Pacific is her blue dress and the froth of the waves is the lace which adorns it. It is also at this sea hill that the Sea collects the offerings made to her. This is why the sand, the piers and the rocks close to the hill and the Tatewarita cave, ‘the house of our Mother Fire’, are full of offerings and prayers which were deposited over thousands of years in this terrestrial paradise. The past, present and future seem to unite in this ritual that the Huichol have jealously preserved from time immemorial.
Pedro Santacruz