The history of these indigenous people of Mexico, who have survived modernity and changes, is hidden among the threads of their weaving. The Mazahua textile craftsmanship is the bearer of an identity that finds its origin in the pre-Hispanic past.

Little is known about the history and traditions of the Mazahua people. According to some colonial chronicles they were one of the five Chichimeca groups that migrated to the Valley of Mexico in the 13th century, and settled down in Mazahuacán (‘the land of deer’). However, the origin of these people is not certain. Academics have studied and researched more about their neighbours, the Otomi people, and relegated the study of the Mazahuas to the side lines. So, despite being the largest ethnic group in Mexico City and the indigenous population with the largest presence in thirteen municipalities in the State of Mexico and seven in Michoacán, this culture is still unknown, with the exception of the colourful clothes of their women. 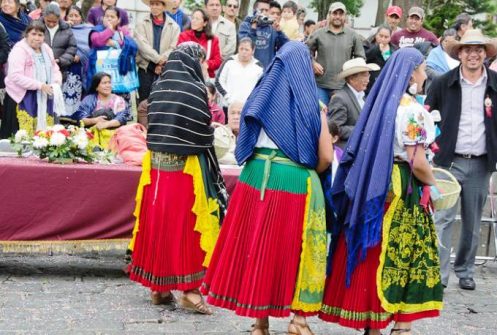 During the sixties and the seventies of the last century, many Mazahua single mothers arrived in Mexico City, and settled down mainly in La Merced. These Mazahua women, wearing their typical colourful dresses, sold fruit along the avenues of the city. In order to enhance their income opportunities, the government supported the creation of sewing workshops where the Mazahuan women started to produce their popular rag dolls, which are still sold on the sidewalks of the city.
Mazahuan women’s colourful dresses did not pass unnoticed, and since the eighties, they have become an emblem of pride of this indigenous group. Mazahua clothing style, however, has been changing over time due to economic and social pressures. For example, the traditional male dress, which consisted of a shirt and coarse cotton trousers with embroidered bands, fell out of fashion when the Mazahua men migrated to the more industrialized cities, such as Toluca and Mexico City, and started to wear manufactured clothes. Only their woollen pedal loom-made overcoat, in reality, is a legacy of the colonial era. 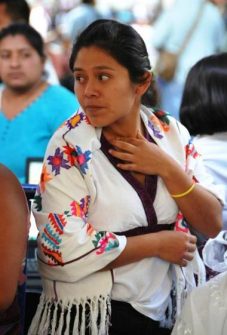 Other items of clothing, such as the lia (a skirt made of two horizontal panels of linen), or  the sabanilla, a hand-woven wool skirt which is placed around the waist and fastened with one or more strips of different materials such as cotton, wool or a combination of both, have almost disappeared.
Clothing styles change according to locality, climate, assortment of fabrics, creativity and purchasing power. For example, in the municipality of Temascalcingo, women still use the traditional quexquemetl, a garment which has been worn by some indigenous ethnicities in Mexico since the pre-Hispanic period. It usually consists of two pieces of rectangular cloth, often woven by hand, which is sewn together to form a poncho or shawl-like garment and is usually worn hanging off the shoulders. The quexquemetl, which is adorned with yarn fringes, once showed few and small cross stitch designs, and now they cover the entire garment. The quexquemetl is the mink stole of the Mazahua women. The women of Donato Guerra, in the State of Mexico, make such thin cross stitch patterns that their garments look like tapestries. Their typical dress is a very short satin skirt showing the petticoat, like can-can dancers. 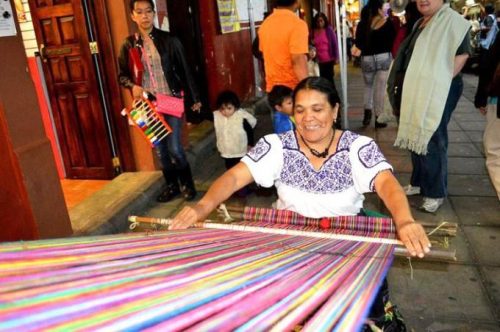 Just like the Franciscan friar Jacobo de Testera (1490-1544), who developed a system of hieroglyphs painted on canvas, because his Mazahua parishioners asked him to teach them the Catechism by easy-to-remember graphics, the Mazahua artisans recreate and transmit their beliefs and dreams through fabrics and embroidery. Their designs have a symbolic meaning, they speak about the life of these people.
The word mazahua comes from Nahuatl and means ‘people from the land of deer’ (jñatjo or jñatrjo). The image of this animal, in fact, is often portrayed in the textiles of this community; the deer also symbolizes the sun god.Mazahua textiles are also used to dress the statues of saints on the occasion of the Patron Saint festivities when the altars of the churches are also adorned with Mazahua weavings bordered with religious embroidered dedications. The motifs of tablecloths, backpacks, folders, napkins and other Mazahua handicrafts for daily use, also show the amazing cosmovision and the aesthetic sense of these people.