Ancient Mayan cuisine was varied and extensive. Mayan raised-field systems and the fertilization techniques of the land show us that the Maya people were innovative farmers. Maize and cacao have marked their history.

Several pre-Columbian peoples inhabited the Yucatan peninsula and the Mexican territory between 3,000 and 1000 BC. Cultures such as those of the Olmecas, Izapas, Teotihuacanes, Mayas, Zapotecas, Toltecas, Mixtecas, Huastecs, Totonacs and others flourished some 4,000 years before the arrival of ‘the Spaniards’ in the 16th century.
The Mayan civilization reached its zenith between 800 BC and 300 AD in the Yucatan peninsula, the territory of the today’s Guatemala and Belize, in addition to the western regions of Honduras and El Salvador and in the Mexican territories of today’s Chiapas, Tabasco, Campeche, Quintana Roo and Yucatan. 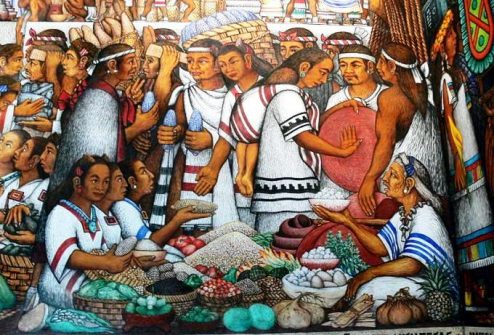 In this region of northern Central America and southern North America, there are different types of climates due to the variety of geographical regions. These lands are covered with forests, plains, mountain ranges and lakes and show various types of soils.
Over-population and a combination of drought and deforestation were some of the causes that made the Mayan civilization collapse after more than a millennium of existence; other cultures prevailed, and historic Mayan monuments have sometimes long been hidden in the jungle. However, though the Mayan empire disintegrated, the Mayan people never became completely extinct, but rather this ethnic group has survived and inhabits many of the above-mentioned places. Also ancient Mayan art and traditions have survived, as the Mayan gastronomy shows. 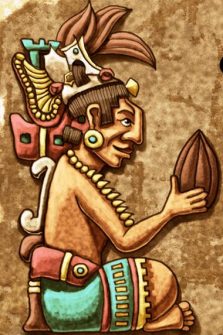 Ancient Mayan cuisine was as much varied and extensive as the empire of this people was. The gastronomic resources were fishing, hunting, fruit harvesting and agricultural production, which were practiced throughout the territory. The Mayans created terraces along the slopes of the hills by lining them with a wall at the border. So terrace farms were established in the jungle regions. Ancient Mayas also knew soil enrichment methods and different techniques of fertilization. Slash and burn was a common method used by the Mayans when cultivating the fields. The Mayan region had a thin upper layer of soil. After two consecutive harvests, this layer was exhausted and Mayans had to abandon the field and move to another portion of the land. The abandoned field was left on its own for up to a period of five years. Then the Mayans chopped down any vegetation which had grown up on it in the interim and drying vegetation was put to fire. The burnt remains of the vegetation returned to the soil minerals and nutrients required for a proper harvest. Mayans were then able to re-cultivate the field for another two consecutive years. They also practiced crop rotation in order to boost soil fertility. 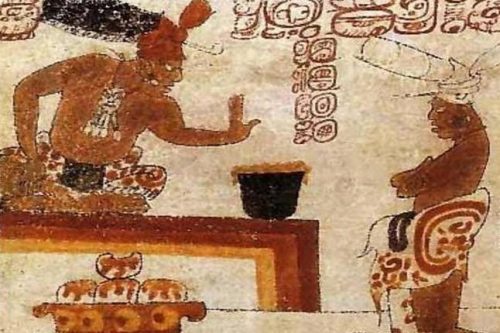 The Maya people are thought to have started cultivating corn (maize) in 5,000 BC. Corn became a staple food because it was nutritious and easy to store. Although their principal crop was corn, farmers also cultivated pumpkins, whose cultivation dates back 10 thousand years B.C. Small pumpkins were also used as containers of liquids, today’s bottles. The Maya farmers also grew beans and a variety of vegetables including tomatoes, chili peppers, and fruits such as avocados, papaya, bananas, and mulberries. The Maya’s greatest achievement is something loved all over the world today, chocolate. The Maya had been using cacao beans to make a beverage called Xocoatl for millennia. Cacao fuelled the growth of the Maya empire and was even used as money. In fact, the Maya’s numerical system, represented in dots and bars, is said to come from using cacao beans and lines drawn in the sand to calculate figures. By the time the Spanish arrived in the 1500s, the use of cacao had spread to the Aztecs, who called the drink chocolatl, and believed drinking it gave wisdom. 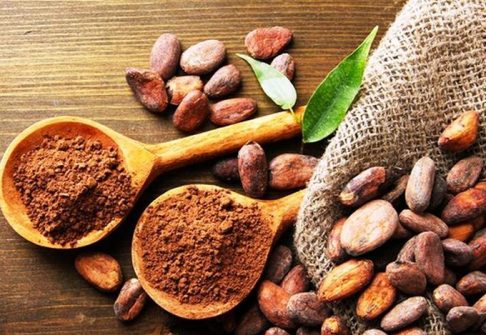 When the Mayan civilization declined, the Aztec civilization rose in Mexico. The Atzec people are well known for being some of the best warriors of their times and for their gruesome human sacrifices to their gods. The Aztecs created farmland with a new agricultural technique that was called chinampas or floating gardens. These manmade islands were made from large woven reed mats that were piled with rich earth from the bottom of the lake. The mud was rich in minerals and ideal for growing crops. Fast growing willow trees were planted so the root systems would grow to the bottom and anchor the islands. The islands were planted with crops that produced large amounts of food. The Atzecs also grew tomatoes, avocados, squashes, chili peppers, flowers and corn which was their principal crop. Aztec women ground corn to make masa a special maize (corn) flour and made dough using the masa. They formed balls from the dough, which they flattened and then cooked to make tortillas. (F.L.)

Photo Gallery – Indonesia. The life in the village

The president Trump’s plan for ‘Peace to Prosperity’.

“President Trump announced the launch of his Deal of the Century to achieve peace between Israel and Palestine.” “Donald Trump’s peace plan isn’t a plan…

The Hippo and the Elephant.

Africa emits only 5% of world greenhouse gas emissions yet is most at risk from worsening heatwaves, droughts and floods. African youth activists urged their governments to…