Carnival is celebrated by dancing in the streets, in many Mexican towns. It is a colourful feast characterized by the typical holiday hustle and bustle, dances, music, and masks of course.

The dance groups of the south of Tlaxcala perform the Dance of Chivarrudo. These dancers are representative of the lower-class mestizo cowboys who were responsible for the cattle drives in Tlaxcala in the late 19th and early 20th centuries. The Chivarrudo dancers move and jump while they sing letrillas (poems set to music).
These dancers wear cardboard hats with geometric designs, furry chaps and sports coats. The chivarrudos also recite social criticism couplets between one dance and another. 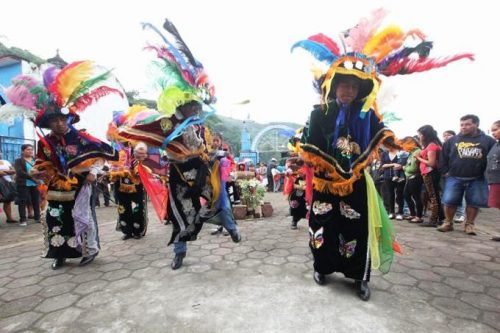 Popular at festivals across the state of Veracruz, the frenetic Baile de los Negritos or Dance of the Negroes, is a dance native to the Totonac of Veracruz and Puebla, although it is also found in some Nahuatl communities in the same region. This dance combines African, European and indigenous elements. According to legend, a woman accompanied her only son to his work on the fields. One day, the man was bitten by a snake. The mother captured the snake and threw it into a jícara (gourd), the slaves performed a curing ceremony for the wounded man and his mother danced herself into a trance. The Totonacs witnessed the ceremony and began to practice it in parody. The dance is normally performed by 13 black men who represent different characters. The lead dancer or caporal, is dressed as a woman and plays the role of the sick man’s mother. He carries a red gourd and a silk handkerchief with the snake inside. During the performance, the dancers’ stamping is marked by the rhythm of castanets. The dancers have their face covered with wood carved black masks that represent the face of black men and wear shorts that show lateral openings like those in the trousers worn by Spanish bullfighters. The dark colour of their French quepis-like jacket contrast with the colour of the ribbons and embroidery. The dancers also wear a hat, adorned with flowers, feathers and fringes, elements which are usually associated with the Black Tezcatlipoca. 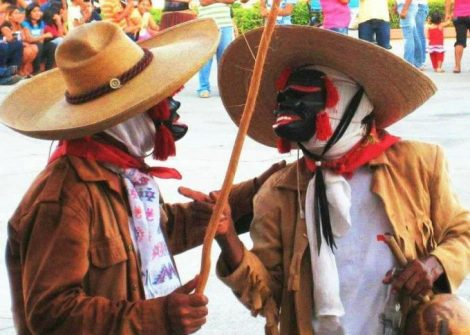 The Dance of los Chinelos is a traditional dance of the state of Morelos, in which colourfully dressed dancers dance and wave flags accompanied by a set of traditional tunes played by a brass band. The town of Tepoztlán is known for its Chinelos but the dance is also performed throughout the state of Morelos in towns like Yautepec, Coacalco, Cuautlixco, Atlahuahuacán, Oaxtepec, Jojutla and Totolapan, as well as in some towns in the state of Puebla. However, its origins are found in the town of Tlayacapan, when in 1870  a group of young people, who were excluded from the celebrations of Carnival, since they had to respect Lent, decided to disguise themselves with old clothes covering the face with a handkerchief (or piece of blanket) and began to shout, jump and dance the quadrille through the streets of the town. Today the Chinelos wear a long velvet tunic, a mask, a large plumed hat, a scarf and white gloves. The Chinelo’s masks are characterized by large eyes, bushy eyebrows, a long mustache, and are made of mesh and always feature an upturned beard and European features. 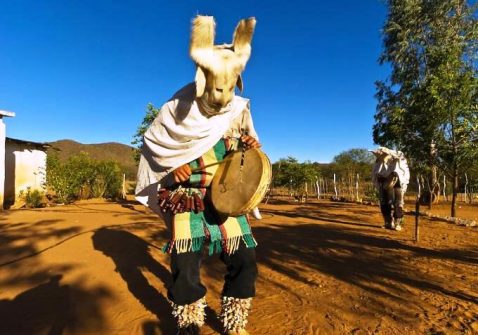 The indigenous Yaquis and Mayos, who inhabit the states of Sonora and Sinaloa celebrate carnival by performing the Dance of the Pascolas and the Deer, a ritual of pre-Hispanic origin that has been practiced for over 300 years as a call for rain to the gods. According to the vision of the indigenous communities, the pascolas (the elders of the party) were malignant beings, children of the devil. However, God won them in a game. The deer represents good. This dance is performed individually and the dancers are supposed to be also good musicians. The choreography of the Dance of the Pascolas represents the confrontation between good and evil, which is symbolized by the deer and coyote masks. The several masks of the Dance of the Pascolas and Deer are made of wood and beards of ixtle. The dancers do not wear hats while they wear necklaces and medals with religious images. The zoomorphic masks that the dancers wear are supposed to transmit them the properties of the animal they represent, that is why dancers wear their masks when dancing to be able to move and jump like animals can do. 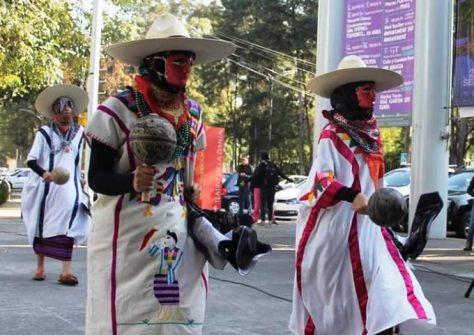 One of the main traditions of the carnival in the state of Tabasco is the ‘Pocho Dance’, which is performed to the sound of percussions and the sound of the reed flutes played by the pitero. This famous dance has pre-Hispanic origins and it is a religious ceremony of cult to the gods. Three characters are involved: the lame (men), the pochoveras (women) and the tigers, who decide to unite to fight against the god Pochó, who desires the destruction of men. This dance is an act of purification and symbolizes the struggle between good and evil. After the dance, it is customary to remember the incidents of the year and to share tamales, sweets, coffee and brandy. 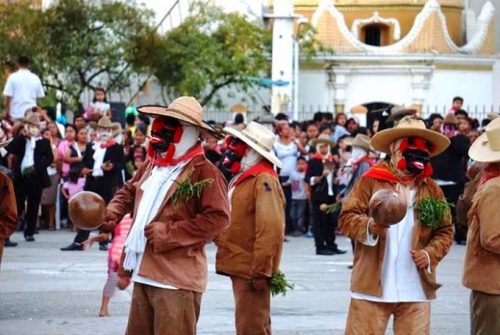 In the state of Oaxaca a satirical scene of the mixed traditions as weddings and divorces, is showcased during carnival. It is called the dance of the Tejorones and it is performed by eleven dancers who wear worn and white clothes and hats with rooster feathers on their head. They also wear masks made of wood and carry rattles, toy shotguns, machetes and pistols. The Tejano dancers arrive at the centre of the town while the audience gathers around them.
The dancers make jokes and comments to the public, which in turn responds and encourages the game even more. The Tejano dancers face other characters, usually the tiger, the cow, the dog and the Maria, a woman of the tejorones. This dance has been given different interpretations. On one hand it is considered as a dance with strong sexual connotations that could not be expressed outside the context of the carnival. On the other hand it is interpreted as a denunciation of the sad fate of the indigenous peoples, represented by their nahual (the personal guardian spirit believed by some Mesoamerican Indians to reside in an animal): the tiger. In either case, the purpose of the Tejorones is to make what society forbids live.

Photo Gallery – Covid-19 around the World

One of the most important aims of advocacy is building strong democracy and democratic organizations to hold those in power accountable, expanding citizen’s understanding of…

The Water in Olive Lake.

Long, long ago, a mother and her son lived by Olive Lake below Olive Mountain. The mother was very, very old and could not work anymore.…

Youth on the frontline against Covid - 19.

In the time of Coronavirus, young people have organised to prevent COVID-19 from spreading and supporting their communities. In Cameroon, Achalake Christian, the coordinator of Local…