Marriage in Buganda was one of the most important activities and a time for merry making, a time when two families come together. This was a time when the boy was given a chance by the girl’s family to be part of their family and vice-versa.

Clan mates never get married to each other as it is considered as incest which is a taboo since they are considered to be brother and sister. Incest has always been taboo in Buganda and that is why both families investigate each other to make sure there is no blood and clan connection from both sides. The Ganda culture has always allowed the paternal aunt (Ssenga) of the girl to investigate the man she is getting married to, to find out if he is not related in any way whether by blood or clan or sharing the same totem. Unlike today where one identifies a girl he would want to marry, in the olden days, the young men and women would be match-made by their parents. They would match-make according to the economic, political or social statuses of both families. 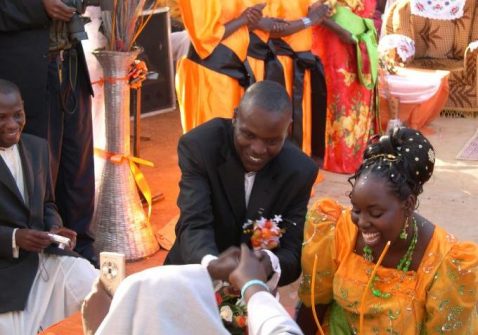 The boy’s parents would identify a girl and ask the girl’s parents if it was okay for their son to marry the girl or the girl’s paternal aunt would identify a young man from a good wealthy family who was not a blood relative, after doing her investigations, then tell her brother about the young man. Sometimes if a boy liked a particular lady, he would get in touch with her family and tell them his intentions.
Meanwhile, the young man’s family would also try to investigate the girl’s family and if he liked the girl, then he would pay a visit to the girl’s paternal aunt and discuss his intentions with her. He would also hand her a letter which she will be expected to give to her brother (the bride’s father). In that letter, the boy tells the girl’s father his intention. The paternal aunt will then be required to deliver the letter and also tell her brother about the suitor’s visit. 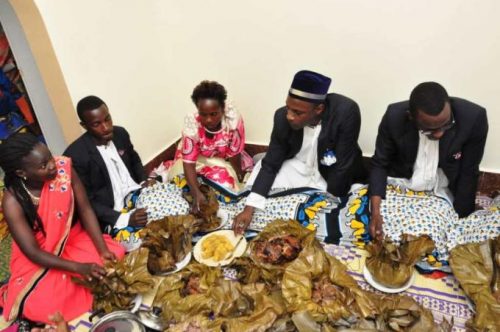 Then the girl’s father would reply to the letter informing the boy, and giving him a convenient date when he and his entourage can go and visit him, and in that letter he will also tell them what kind of bride price he wants when they go to discuss his intentions.
The bride price would always include the kiganda, local brew, (Omwenge Omuganda), an envelope with money in it, a Kanzu (a tunic which is the traditional cloth for males in Buganda) for the girl’s father and uncles, Lubugo or Gomesi (kiganda traditional dress for women) for the girl’s mother and ssenga. The ssenga would in-turn receive an envelope from the groom. The groom would be required to also send ‘omwenge omuganda’ to some of the girl’s paternal uncles, once he fulfils the requirements and has brought ‘omwatalo‘ (special gift to the bride’s father), chicken for the girl’s brother (Omuko) and the girl’s family is satisfied, they would sit and discuss. Then they share coffee beans amongst themselves to create a bond between the two families and the girl would be given to the boy as his wife.
After the girl has gone to her new home, she would tell her mother-in-law and husband that she was taking back the cream she was using while still at her parents’ home and she will also give her dress to her mother-in-law who would in turn exchange it for a new dress. 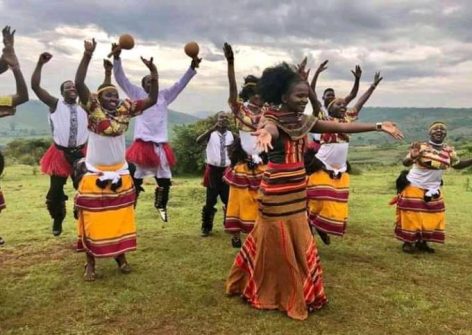 When the girl returns from her parents’ home, she comes back with matooke and chicken or even a goat and on the day of her return her husband will help her slaughter the chicken or goat or both; she will then cook the matooke and the chicken or goat and they will feast.
After some days, her parents will visit her to see her new home and will also come with plenty of food which they are expected to cook and feast as one big family.
If a girl was still a virgin in Buganda, her parents would be offered a goat in appreciation for taking good care of her.
A girl who was getting ready for marriage in Buganda had to follow a number of rules: she would not go out of home let alone come out of the house for a month or two until her husband came to take her after the marriage; in the house they would give her cow ghee to smear on her body so that she would look beautiful on her traditional marriage. Her paternal aunt would teach her how to manage her home and how to treat her husband. (I.L.)