In the south of Madagascar live the Bara, a cluster of 18 ethnic groups that share language and culture. They live in an arid land, where agriculture cannot thrive, and so they developed an economy based on husbandry. They also developed an interesting relationship with death and the deceased.

The Bara claim that death is a passage that allows a person to become an ancestor and thus permits them to influence the life of the whole clan. This passage is celebrated in three stages. When a person dies, the corpse is cleaned and wrapped in a shroud. The morning after, relatives and friends come to visit and offer condolence to the family. The morning of the third day, the body of the deceased is interred in a solitary location, often in a cave which is then sealed. It is left there to rot for months, at times for years. In the meantime, the family prepares for the second step of this complex rite. 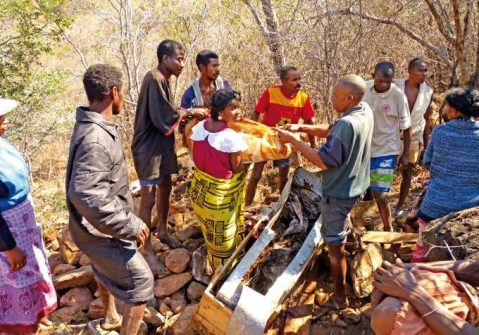 The second stage of the funeral requires large amount of goods and money. The family will have to plan carefully, and this may take long. If a family has not enough means, they will agree with other clans and organize a common festival, sharing the expenses. Once all the preparation is done, the family of the deceased will inform the chief of the clan. He will then go to the formal sepulchre of the family and offer a libation of rum to the ancestors. After that, he will decide when the funeral will take place. This is always sometimes between June and September, the dry and cooler time of the year.
When the time approaches, a group of people go to the provisional tomb and exhume the corpse of their loved one. These are always the head of the family plus some adults of the same sex of the deceased. The old shroud is removed and a new, colourful one wrapped around the remains. Then everyone returns to the village in procession. Those who pass along the way will stop what they are doing to pay their respect and murmur a prayer. The remains are taken to the sacred land of the clan. This is always a piece of land with a sacred tree. No one would ever dare desecrate these spots, which are always free from litter and where animals cannot graze. 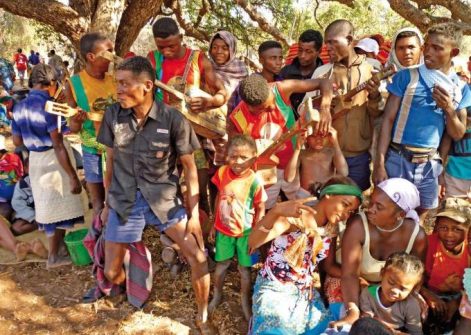 It is here that those invited to the feast gather. They are the members of the clan plus friends and people who live in the area. A bull is brought under the tree and sacrificed and it must be a large animal. The animal is offered to the ancestors to ask them to bless the ritual. Those who arrive to the ground start the feast by dancing, while food and beverages are offered to all. In the morning of the second day, another animal is sacrificed and its meat prepared for lunch. This is the time when the last guests arrive, while all participate in dancing and singing. The remains are brought around for people to touch and embrace them. This ritual goes on until midday, when people stop dancing to rest and eat. Once the food is finished, all go in procession to the sepulchers. These are usually built far from the village. From outside, they look exactly as other house, only they are sturdier and well cared for. This is to honour the ancestors and keep them happy. 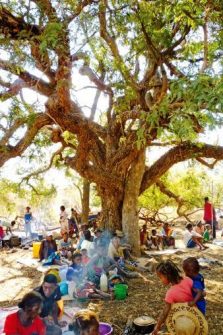 Once at their final destination, those carrying the remains go around the sepulchre seven times. Those in charge with putting the remains in their final resting place take off their shoes, and enter the house. Men are placed on the right side of the house, women on the left. The sepulchre is cleaned; old shrouds are replaced with new ones. People might fight over who takes home the old shrouds, considered important relics of the ancestors. Once all is back to order, the sepulchre is locked. The elders have a few words of leave-taking and then all go back to the village using a different route. This is done to confuse the souls of the ancestors so that they will not follow the people and remain happily in the sepulchre. Once back under the sacred tree, a third animal is slaughtered as a thanksgiving. 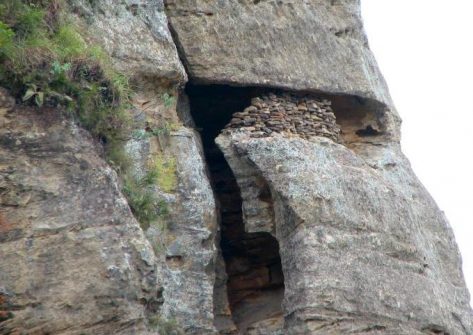 The third stage of the ritual is celebrated only by the members of the family. At dawn on the third day, all meet in the house where the deceased lived. An elder sings a hymn while blessing people with water. A calf is brought in the courtyard; it does not have to be big, but must be red. The calf is sacrificed and the blood put in a container. The elder will asperse it on the walls of the house. Once this is done, the elders and some women of the family have a meeting to discuss family matters. The meeting ends with the sharing of food and dancing, which last until dark. The last morning of the rite, the family goes together to the river to have a ritual bath. This ends the ritual and the deceased is now an ancestor. While all return to their daily chores, the ancestor will watch over and bless them.