Logging is another major threat. It provokes soil erosion, water pollution and reduces the regeneration capacity of the forest, warns the Central African Forests Observatory (OFAC).
Moreover, it contributes to the densification of the human presence in the forests, opening roads to poachers and itinerant farmers or charcoal producers.

Illegal logging is continuing as showed in the seizure in May 2013 in the port of Antwerp of a 40 square meters cargo of Afromosia timber, exported by the Congolese Tala Tina company. The Rainforest Foundation, also exposed the intensive illegal logging inside the Boumba-Bek (238 200 ha) and Nki (309 300 ha) national parks in Cameroon.The Industrie de Transformation du Bois (ITB) company owned by the Lebanese businessman Fouad Sarrouf has been accused by Greenpeace of illegally logging wenge trees in an area dedicated to the protection of bonobo apes, in Northern DRC. 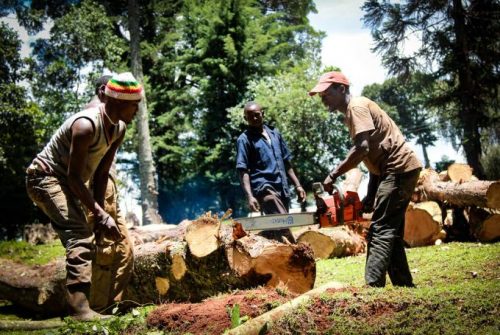 According to the Rainforest Foundation and the Forest Monitor, industrial logging reduces the biodiversity of zones which are contiguous to the protected areas because it disturbs the upper layer of the forests which provides direct contact with the sun beams and the atmosphere, and introduces microclimates which may facilitate bushfires. During his visit of Madagascar in September 2019, Pope Francis criticised the local leaders who were profiting from excessive deforestation, in a context where the administration of the current President Andry Rajoelina allowed deforestation to supply rosewood and ebony to China despite a national ban on such exports. 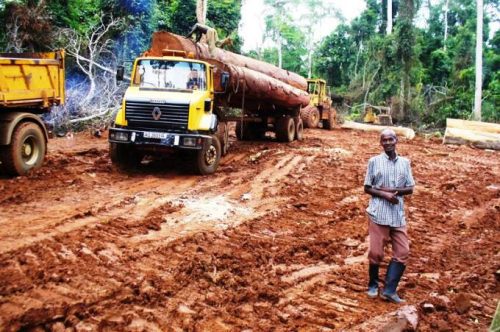 At the end of Rajoelina’s first term, a large unexplained stash of rosewood was found at the presidential palace, according to a draft European Parliament resolution in 2017.
A similar disaster is occurring in Katanga, where the Roman Catholic bishop of Kilwa, Mgr Fulgence Muteba rang the alarm bell in August 2019 about the risk of extinction, in this Congolese province and neighbouring Zambia, of the ‘red wood’ or mukula which is used for luxury furniture by its Chinese importers and  is being illegally logged in the Kundelungu, protected area.

Charcoal
Charcoal (makala in lingala or in swahili) is one of the main threats for the African forests  Indeed, firewood  and charcoal represent up to 80% of the energy consumption of the continent and the proportion is even higher in the DRC (92%).
According to Dr. Theodore Trefon, specialist on forest governance at Kinshasa ERAIFT tropical forests management school, the situation is particularly tragic in the city of Goma, where most of the people buy the charcoal which comes from the Virunga National Park, whose business and trade is in the hands of the militias. 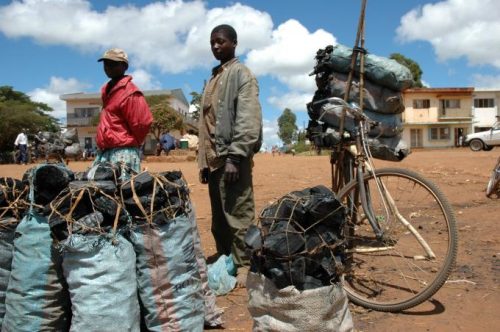 The problem is that alternatives are difficult to create because it the makala production, transport and trade represents $143 million and over 300,000 jobs for the supply of Kinshasa alone, explains Trefon.
But the widespread practice of slash-and-burn agriculture is, however, the main cause for deforestation and for the wildfires which are five times more numerous than in the Amazon, according to images captured by NASA’s Moderate Resolution Imaging Spectroradiometer (MODIS) technology last September. In Angola alone, NASA satellite imagery reported over 6,000 fires or three times more than in Brazil while 3,000 were spotted in the Democratic Republic of Congo. The proportion is scary. Senior Forest Campaign Manager for Greenpeace Africa Irène Wabiwa Betoko reminds that in the 2016 wildfire, seven ripped through the Republic of Congo’s capital, Brazzaville. (F.M.)