The Gabbra are a nomadic people who live in the north-west of Kenya and the south of Ethiopia. An account of the celebration of ‘The Lamb of the Sacred Enclosure’.

“Orjale, you who were born on the mountains of Ethiopia, come to the feast with your spouse Bimbirra and your son Dida”. With these words the great feast of Qarso Nabo begins. Qarso is a lamb that has not yet generated; nabo is the enclosure typical of the Gabbra.
Orjale is the poetic name for the Dabela; the men who, by their initiation, have reached the highest and most revered grade of the tribe. The feast begins at about ten in the morning but at sunrise the men have already begun to build the enclosure, bringing sirghiso branches which are arranged to form a perfect oval shape with two openings, one to the north and the other to the south. In this way, two walls are created, two and a half metres high and eight wide. None of the men will fail to bring a branch. Those who arrive after the enclosure is complete nevertheless add their branches to strengthen the enclosure. There is an air of joy and festivity in all the villages round about. 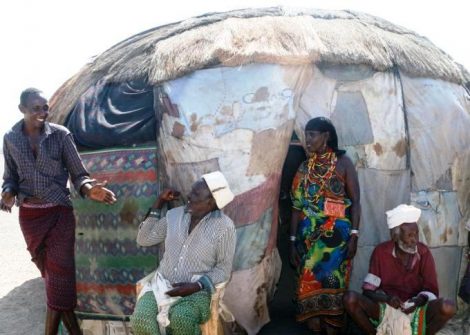 All around, as far as the eye can see, there are the tall outlines of the camels and the white forms of the flocks. Everyone has to attend this feast of life, prosperity, peace and harmony. When a man arrives, often followed by a son bearing a stool or his wife carrying a container full of milk, he carries a bunch of grass and places it in the enclosure. Then, if he is married, he goes inside and lines up with the other elders, after having placed his staff at the centre and his container of milk close to the wall of the enclosure.
In the middle of the enclosure, in line with the two openings, there is a row of ororo, the long staffs of the fathers of families, symbols of paternal authority; then there are the gorfa, the vessels of milk placed in two parallel rows and lastly, close to the left wall, there are the most noted elders and the dabela, seated in a single row facing the elders. 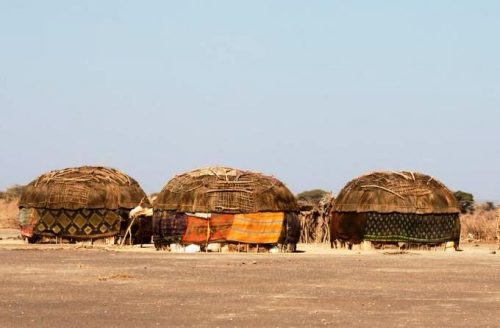 Today all will dance together. In fact, apart from this traditional celebration, dancing always takes place in separate groups. The young men and girls, women and men dance by themselves. Inside and outside the sacred enclosure it is all singing and dancing. The men are inside while outside there are two groups of women and a further group of young men, each singing their own song. The whole is a perfect and grandiose harmony: the imposing voices of the men, the rhythmic beat of staffs and the skins on which the young men are dancing, the dancing of the women whose metal rings and rhythmic hand-clapping accompany the voice of the soloist who expounds a theme, and the perfectly harmonised choir of the group.
Within the sacred enclosure the elders sing the dikira, the more solemn songs, which are used in the celebrations that occur every eight years for the passage of the dabela. The songs are alternated with prayers, always pronounced by the elders in the form of a litany. One elder presents the theme and the others respond in chorus Nage which in the Borana language means peace. 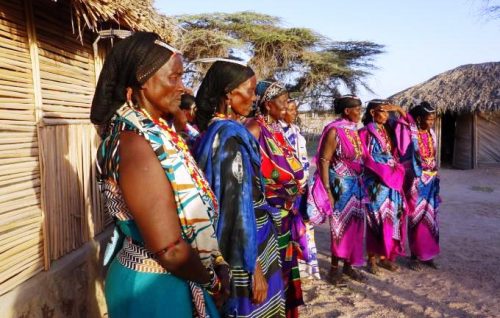 The sun is now high in the sky but the singing, dancing and the air of joy and festivity not only do not diminish, but intensify. A ceremony now takes place, conducted by married women who enter, some by the north door (Jiblo) and others by the south (Lossa).
Each carries  a long, large spoon full of perfumed oil, with herbs, and presents it to each of the elders who apply it to the women’s arms, saying: “May you be the mother of strong young men; fill your house with offspring”. Then the woman anoints the arms of the men saying: “O elders, may you have a long and prosperous life”. Meanwhile, those present continue to sing.
The theme of fecundity and life occurs repeatedly in this celebration and also finds visual expression in another ceremony, that of the milk. Four young men are invited by the elders to fill various vessels with milk and give them, full to the brim, one to each of the elders sitting in a single row close to the left wall of the enclosure. The young men take a little milk from all the vessels placed in parallel rows in the centre of the nabo and fill to overflowing the large gorfa which each elder has on his knees. The milk flows onto their knees and the people exult saying: “Take some more; there is plenty of milk”. The elders reply: “May you be satisfied with this milk”. Afterwards, when the elders have drunk, the men, women and children also drink the milk. 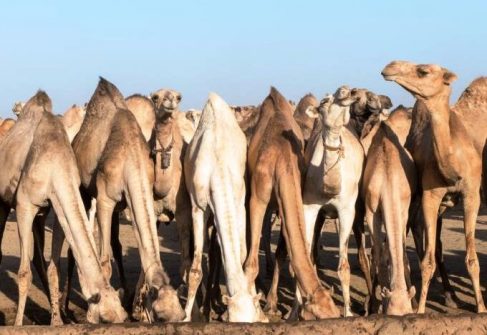 The elders then leave the enclosure, moving in the form of a dance and come close to the lambs while singing the sacred songs (dikira): “Lamb of peace, give us life, / Give us peace. May our life be under the protection of God, / make us men of God, / bless the grass and water for us / You, O Lamb of God, / And you, O God, / fill us with peace; / bless the food for us”.
Once the song is ended, the elders gather round the victim to be sacrificed and drink the milk. Lastly, just before the sacrifice, a high voice repeats four times: “Dabela, what do you wish?” and those present respond together in chorus: “Rain and peace”.
Two men approach the lambs and cut their throats: while the blood is flowing, the young men present take a bunch of grass and rush to dip it in the blood which they use to mark their camels and the doors of their houses. All the men as well as the children mark their foreheads with the same blood. A number of young men take the meat to their huts to cook it; those who remain behind carefully cut the skin into many strips which will be used to make medica, bracelets for the heads of families; the entrails of the animal are examined by some elders who learn about future events from them.
Towards six in the evening, the people return to the sacred enclosure with the cooked meat which is then distributed. Everyone receives a piece of meat. The people sing and pray. The heads of families receive the medica. The ceremony is now over and people return to their homes. (P.T.)
(photos: Carsten ten Brink)

Photo Gallery – Electricity For All

10 Ways We Pretend War is Not a Crime.

Advocacy, more than economic interests, is about consciousness and knowledge. It is about building a strong democracy, holding those in power accountable. It is about…

Why the Hippo lives in the Water.

Many years ago the hippopotamus, whose name was Isantim, was one of the biggest kings on the land; he was second only to the elephant. The…

Saving the Planet and Ourselves.

Australia, Philippines, California and Central and South Africa have been recently hit by severe drought and endless forest fires.  Thousands are suffering. Plants and animals perish.…