Exact rites mark the passage to an age group or becoming a member of a particular group. In this way, identity and world vision are preserved.

At birth, a child receives a provisional name that is later replaced with a name chosen during a ceremony that is the same both for girls and for boys. It is called em-barnoto and nkerai.
When a boy is ready to go with the older boys to pasture, he enters the state of ayiokisho. Infancy ends with en-dungoto oo layiok, meaning the cutting of the boys who form a new group leading to circumcision and the formation of a new age group. 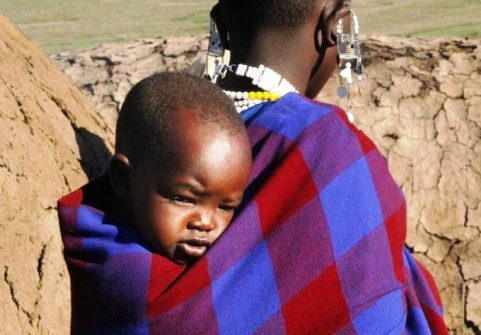 During this period various ceremonies take place; the most important of these is the en-gi-lata ol-piron, the breaking of twigs, guided by the ol-oiboni, the expert of rituals. There follows the anointing of the boys called enturoto and motonyi. From this point on, those initiated are under the authority of the elders who lit the fire for them after the en-gila-ta ol-piron (ol-piron means kindling twig). The elders involved are from the second age group preceding the newly formed group.
After about four years, this group will be given permission to celebrate the en-kipaata. Essentially, this is a dance that lasts several days after which the group receives a name.  Some sections of the Maasai celebrate the e-mouo o lkiteng, the ox horn, immediately afterwardss; others will do so later as a further moment of growth during which it is decided who will have the honour of carrying out official offices within the group. After this celebration, the group is ready to undergo circumcision, e-murata. 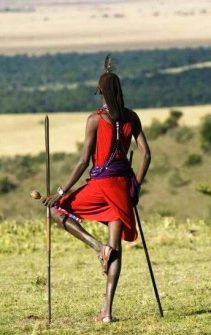 The first is called emurata e tatene, the circumcision of the right hand; this group will be named ol-rporror le dukuya, the first circumcision group. The participants will quickly proceed through the stages of novitiate, ol-airbartani, and of the shaved, ol-barnoti. Being shaved is a sign of their imminent entrance into the group of the warriors. During all this period, the young men are still part of the group of childhood.
The second circumcision group, ol-porror le isadi, that of the left hand, begins its preparation and repeats all the ceremonies of the first group. After this second circumcision, e-murata e kedianye, the two groups are united and this marks the end of childhood. They are now ready for the e-murano phase, to become warriors.
The warrior class is the best known among the Maasai. Their characteristic dress and exposure to the world of tourism have struck the western imagination.
The warrior group begins with ol-kilia, the youngest group and the young Maasai are introduced to it with the ceremony of the ol-kitengloo nkulanen, the ox with ear plugs, followed by other blessing ceremonies.
The young men may also organise an ol-pul, a meat feast, in a shady place close to a water course where a cow is sacrificed.
The best known among the ceremonies is the l’e-unoto, the planting. With this rite – involving a long and laborious preparation – the young warriors become elder warriors. A special camp, manyatta, is set up with, at its centre, slightly to one side, the o-sinkira, a rather large house prepared for the ceremony. 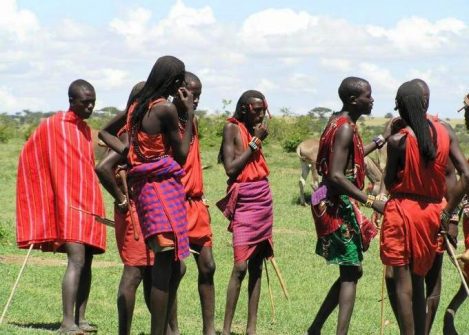 During the l’e-unoto, some warriors are chosen for official functions and a new en-kipaata is celebrated. The five functionaries and the 49 warriors considered morally good, kill the ox that will be eaten. The ceremony of the calves of spit, loo nk-amulak, concludes the feast.
The warriors continue their function as defenders of the tribe.
As years go by, the first marriages will take place. It is the time for passing to the stage of the elders, a passage marked by the ol-ngesher ceremony; the new elders eat meat and drink milk.
Among some groups it is a public ceremony and requires the construction of a new fortification; among others it is simply private. In both cases, this is the end of the taboo forbidding the warriors to eat meat and drink milk in the presence of women.

The prestige of the elder

After about five years, the same group will again come together, with their first wives, to celebrate the feast of the stool, ol-orika. The stool is a sign of seniority and has a role in various rites. This ceremony marks the definitive passage to the category of the elders; the two initiation groups unite to form a new age group. 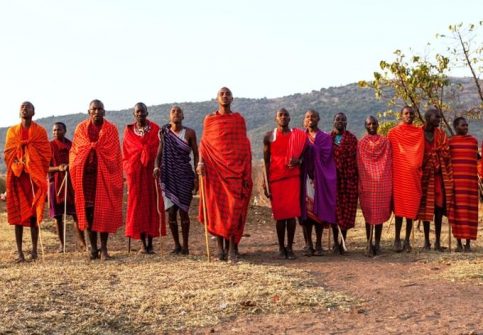 The elders direct the life of the community through the council, en-kiguena, and by making decisions concerning the rites of initiation, thus imparting life to the cycle that leads the young to become elders. They also direct marriage, an aspect that is now radically changing; it is always the younger ones who depart from traditional practices.
As a result, the authority of the elders and their control over society is changing.