What is the so-called ‘Middle East Peace Plan’ ? What this means, in practical terms ? What can the Palestinians Expect from the Deal ?

Seventy years have passed since the foundation of the State of Israel. Less remembered in the West is the flip side of that coin; the ‘Nakba’, meaning the ‘Catastrophe’, which that foundation has represented for the Palestinians. The birth of Israel has transformed the Middle East and the whole world.
The Israeli-Palestinian conflict, or ‘question’ – which has become a global dimension. Its military and political, even cultural, aspects have significant repercussions on various governments and civil society all over the world. It was. It would not be exaggerated to describe it as the single pressing issue of the post-WW2 era.
Zionism, the ideological movement that created the present State of Israel, was born as a response to the rising nationalism in Europe during the mid and late 19th century. Its founders, at first did not care where the new ‘Israel’ would be established. The early Zionists were concerned with the idea of ​​establishing a homeland for Jews. 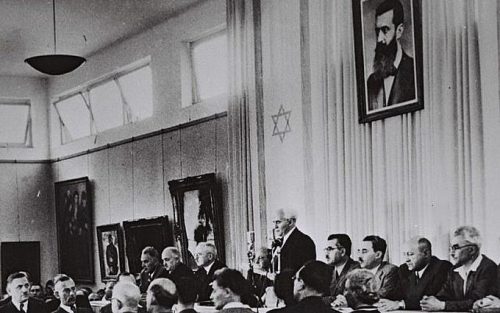 In 1903, Great Britain’s colonial administration offered some 13,000 square kilometers of land in which to establish an indepedent Jewish State in Uganda – in the Mau Plateau, now located within Kenya’s borders. In a similar logic proposed land in British Guyana, Australia and even Japan. Austro-Hungarian born journalist Theodor Herzl, published in 1896, published Der Judenstaat (The Jewish State), where he presented the first official vision of a Jewish state.
If Herzl revisited the Biblical plan of ‘Exodus’ in a secular framework, it might be said that Israeli leaders have seen themselves – especially in the case of such figures as David Ben Gurion, Golda Meir, Moshe Dayan and, of course, Benjanim Netanyahu – as modern day Moses figures, fulfilling a messianic project. The biblical references have helped mobilize millions of evangelical Christians, especially in the United States (but elsewhere as well), to support the Zionist project.
The evangelicals’ increasing political power in the halls of Washington has produced a need for U.S. politicians of both main Parties, and certianly for the occupants of the White House, to sacrifice justice, common sense and fairness in the name of Biblical prophecy. At no point has the messianic pressure been as intense as today. Indeed, Israel has evolved from its original socialist Zionist project based on mastering the harshness of the land and dedicated labor to nothing short of religious nationalism, particulalry under Netanyahu.
What this means, in practical terms, is that the much and long hailed “two-State solution”, that is of an Arab Palestinian State living alongside the Zionist Israeli one, faces even greater obstacles of coming to fruition than ever. The alternative of a Single State for two Peoples ‘a’ la South Africa’; whereby, the Arabs and Jews would enjoy absolutely equal rights has become an even greater taboo.

Trump and The Deal of the Century

U.S. President Donald Trump has a list where he has been keeping track of all his electoral promises, checking them off, as he fulfills each one: tax reform, check; reduce immigration, check; deal with North Korea, check, and so on. Somewhere on that list, there’s the promise to deal a blow to Iran. There is a growing probability that Trump will order some form of military action against Iran to please Israel and Saudi Arabia. 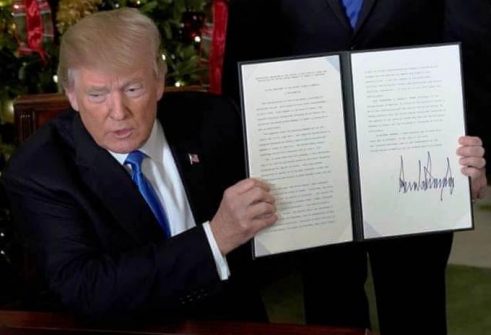 Trump, like just about every American president since Jimmy Carter, will apply his talents to resolve the Middle East peace problem. It would be inaccurate to describe it as the Palestinian Question because, Trump does not appear to care too much what they think, and much less what they want. His plan will try to settle the problem with the least possible Israeli sacrifice. In other words, while the details that have emerged so far are vague, Trump’s ‘deal of the century’, as he calls it, will be impossible for any Palestinian leader to accept, even one such as Mahmoud Abbas, who has often, and perhaps unfairly, given the circumstances and historical precedent, been accused of excessive collaboration with Israeli authorities. 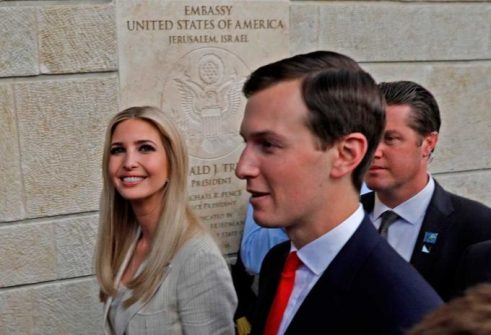 When presidential advisor, and son-in-law, Jared Kushner  – whose family has made large financial contributions to Israeli settler groups (Chicago Tribune) – and the US State Department’s Middle East Representative Jason Greenblatt traveled to the Middle East to prepare the so-called ‘Middle East Peace Plan’ that will finally terminate the Israeli-Palestinian conflict once and for all,  they visited Israel, Jordan, Egypt and Saudi Arabia. Somehow, they missed Ramallah, the ‘capital’ of the Palestinian National Authority (ANP).  The Palestinians have rejected any more U.S. leadership in any peace deals with the Israelis, given Trump’s inconvenient decision to recognize Jerusalem as Israel’s capital, allowing the U.S. embassy to move to the Holy City from Tel Aviv, establishing a new and disturbing precedent. 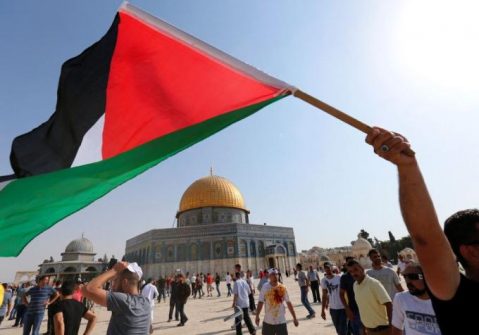 Even before it’s unveiled, the Peace Plan has already sent loud message. The Palestinians have no say in his peace plan. The key general issues that must be resolved to achieve any kind of peace include: The Palestinians’ rights to their land; the right of return, that is the right for the people, whom Israel expelled in 1948 and their descendants to return to Palestine; the foundation of an independent Palestinian State comprising the pre-June 1967 borders; The establishment of Jerusalem as the Capital City of the – eventual – Palestinian State.
Trump appears to have forgotten his famous ‘Art of the Deal’ bestseller from 1987. It’s all about the right negotiation, he claims. Ignoring the Palestinians’ requests and shoving a Don Corleonesque offer they can’t but refuse, is the worst possible way to engage in a negotiation.

Rather, rumors have betrayed that Trump’s peace plan would offer the Palestinians a so-called ‘State’ amounting to no more than 10.0% of historical Palestine. That amounts to some 40.0% of the current West Bank with Ramallah or (as Saudi Arabia’s Crown Prince Mohammad bin Salman has proposed) the village of Abu Deis, adjacent to east Jerusalem as its capital. The plan, in other words, would officially recognize all current illegal Israeli settlements as part of Israel. 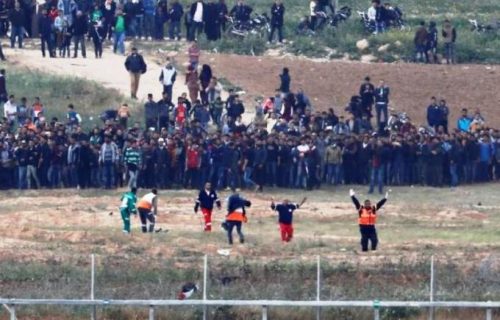 While international Law expressly forbids an occupying power, such as Israel has been in the Palestinian Territories since 1967, from building homes in the land under occupation. Yet, since 1967, some 600,000 Jewish settlers, many of them born in Europe or North America, have done just that. The West Bank would remain separate from Gaza of course and Jerusalem will remain the sole capital of Israel. The Jewish State will also gobble up East Jerusalem- touted in extremis as a potential alternative Palestinian Capital-and the Jordan Valley for security reasons of course. It goes without saying that the Palestinians, under Trump’s deal, would forsake, control of their borders, water resources, roads, airspace – no international airports or seaports. In additions the Palestinians will be allowed to have their own police force, yet not their own armed forces.
Since January 2017, the Israelis have set out to complete some homes for some 15,000 Jewish families on occupied Palestinian land (which the Israelis call Judea and Samaria) while in early July 2018, the Israeli Parliament, the Knesset, approved the building of 1,064 new homes for Jewish settlers in East Jerusalem.
Perhaps, the true and not so hidden goal of Trump’s ‘deal of the century’ is to push more Palestinians toward Jordan, where they already make up about two thirds of the whole population.
Trump and the diplomats he’s assembled to work on the deal hope that some form of financial compensation, presumably to be handled by the Saudis, will help sweeten the rather bitter Deal. 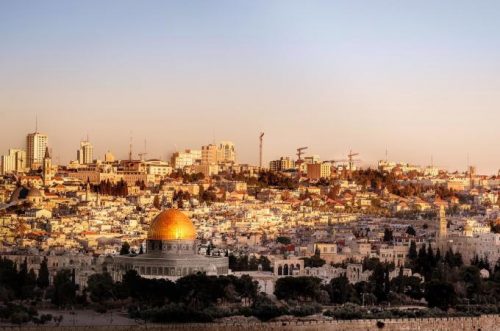 It’s difficult to believe that King Abdallah of Jordan or any other of the Arab leaders consulted by the dynamic duo of Kushner and Greenblatt, apart from the Saudis, could go along with a deal that imposes so much on the Palestinians. Consider also that tensions between Gaza and Israel remain are at their worst since 2014. That puts the ANP under too much pressure. It will be a miracle if Mahmoud Abbas even agrees to read the Trump peace plan, let alone negotiate it. As for the Israelis, they are under no mood to give up any ambitions; there’s nothing to negotiate. Plus ça change, plus c’est la même chose as it were.