Commonly known as bitter melon or bitter gourd, it is a climbing vine whose leaves and green fruits have been used in traditional medicine to fight cancer, diabetes and many infectious diseases despite its being very bitter.

It is a widely distributed plant especially in Africa, Asia, and South America.  This herbaceous, slender climber has slightly pubescent stems and leaves; its leaves are about 11cm long, palmately 5-7 cm lobed. The flowers are yellow and monoecious: the peduncle has a reniform bracteole; the corolla is 1.5-2 cm long; the fruit oblong-cylindric, coarsely ridged and bumpy-tuberculate, up to 20 cm. It is orange or dark yellow when ripe, splitting open to reveal the seeds which along with pith appear white in unripe fruits, then ripening to red. 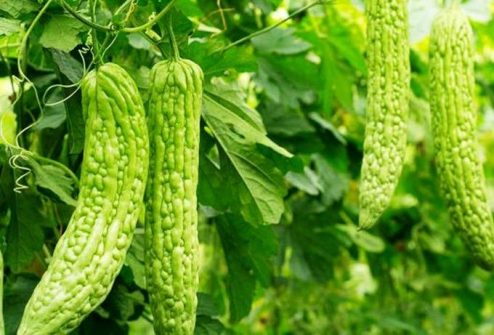 Momordica charantia (Cucurbitaceae family) is highly valued in African traditional medicine. The whole plant is powdered down and used for curing leprosy and other intractable ulcers. The powder is also frequently applied topically to heal wounds. In some societies, the powder, made from the whole plant, is mixed with other herbal plants in oil and topically applied to treat a number of skin conditions, including scabies, malignant ulcers, scalp in postural eruptions, burns, boils, psora and as an antidote for snake-bite. The decoction from a mixture of leaves, fruits and roots is also used to treat fever. The decoction is also known to have powerful effects on HIV/AIDS related illnesses. 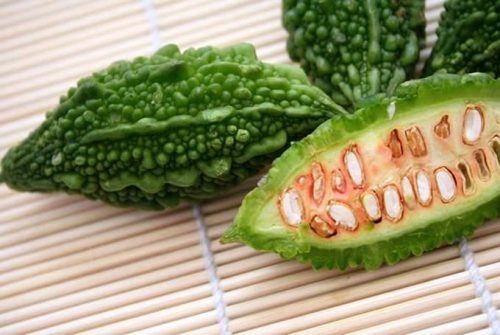 Apart from using the plant wholly as medicine, each of the parts of this plant can be  used singly to treat various diseases. For instance, the leaves of the Momordica charantia are pounded to form paste and then topically applied to treat hemorrhoids, and swellings around the anal region. The paste in some cases is also mixed with other plant remedies and honey and used to treat common respiratory problems such as bronchitis, asthma, pharyngitis, and common colds. The sap from the leaves is rubbed on the soles of the feet to prevent burning sensations.
The reported use of the stem of the plant in treatment of diseases is scanty, but the roots are known to be used in some communities for the treatment of eye related conditions and piles.
The most frequently used part of the plant in traditional medicine are the fruits. The fruit infusion is administered to expectant mothers who are due to give birth, to stimulate the uterus that may lead to preterm labour. The infusion of Momordica charantia fruit, just like the case in most bitter-tasting herbs is administered to stimulate digestive functions and improve appetite in patients. Consequently, the fruit of this plant has been used over the years to treat anorexia, a disorder in which a person is unable to eat the required amount of food. Additionally, the fruit is also used for improving the process of peristaltic movements in patients, hence preventing cases of gastric disturbances.

Furthermore, the decoction made from chopped fruits is used for the effective treatment and management of diabetes. In fact, it’s reported that regular use of Momordica charantia keeps the blood sugar level in check very effectively. Taking bitter melon juice also helps in the treatment of constipation, ulcers and bleeding gum conditions. It also has good results in expelling worms and parasites in adults and children if taken orally. The infusion made from the fruit juice is also known to be used in the treatment of difficult diarrhoea conditions including that which is caused as a result of cholera infection.
The juice of the bitter melon mixed with cold water is used in some communities as a remedy for hangovers. 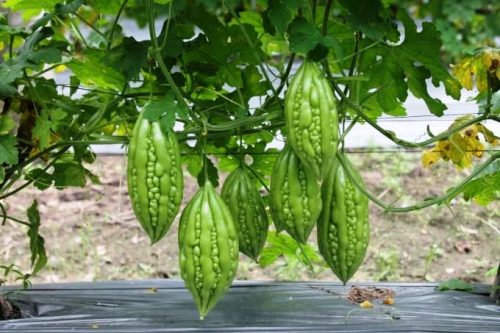 The freshly prepared juice added in a pre-determined quantity of milk is regularly administered orally for the treatment of piles. Bitter melon fruits are used in solving menstruation problems in girls.
The fruits are also used in the treatment of sores, eczema, leprosy and wounds and also to cure hypertension, malaria, fevers and headaches. The fruit is used as a laxative, an antipyretic and anthelmintic, as a cure for biliousness, blood diseases, anaemia, ulcers and bronchitis. Apart from its many uses in traditional medicine, in some communities the tender young fruits are prepared and eaten as a source of food.