The agricultural and metal products of Amazonia are exported on a large scale.  For example, in 2012, the income of Brazilian exports of soya and meat produced in Amazonia amounted to around $9 Bn. Chinese demand has been the driving force behind this expansion: today and Brazil exports around 70% of its soya production to China.

For this purpose, the country has developed special seed that is more productive and more resistant to the Amazon climate and environment. It is foreseen that, by 2021, soya exports will increase by 39% while exports of beef will increase by 29%.
About 21% of Amazonia is being exploited in some way. These forms of exploitation include mineral and oil licenses. These two alone make up 14% of the Amazon region. In the state of Pará, in Brazil, iron mining amounts to $8.8 billion a year while gold from the region of Madre de Dios, in Peru, produced in 2012 alone, was worth $1.3 billion.
The rivers, lakes and streams, which are the heart of that intrinsic interdependence between water, land and forest ecosystems, are being increasingly contaminated by the unregulated use of pesticides and artificial fertilizers, oil spills, mining and the dispersal of derivatives of drug production. 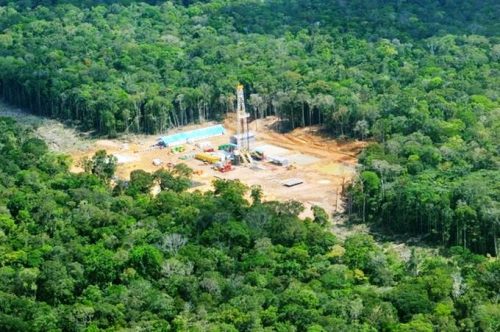 An oil rig in the Amazon Rain Forest in Brazil

In total, 20% of the Amazon biome has already been lost, while the WWF estimates that more than one quarter, more exactly 27% of the Amazon biome, will be without trees before 2030, if the present rate of deforestation continues. Brazil is responsible for half of the deforestation of Amazonia. The improvement noticed in Brazilian Amazonia is due to pressure by environmental activists ‘2006’, which, by means of a strong advocacy campaign, forced the biggest producers of soya in Brazil to agree to avoid deforestation. From then on, the various actors involved (state banks, cattle buyers, the main meat factories and the Brazilian government) all agreed to avoid encouraging, by their activities, the spread of cattle rearing on deforested lands. At the Paris Conference in 2015, Brazil also agreed to reforest, before 2030, a total of 12 million hectares of Amazonia, based upon the awareness that, the preservation of the Amazonian hydrological cycle is fundamentally essential for the good, not only of Brazil but also for the entire world. In fact, if deforestation were to continue at the rate of 20-25%, especially in the eastern, southern and central parts of the basin, the negative synergy between it, climate change and controlled fires would cause the Amazon forest to collapse into a non-forest system.
The indigenous people of Amazonia are the ones who suffer most from the transformation and degradation of their original territories. It is therefore these peoples, the most excluded from the dynamic of power, in whose greatest interest it is to defend the forest from economic speculation and abuses. 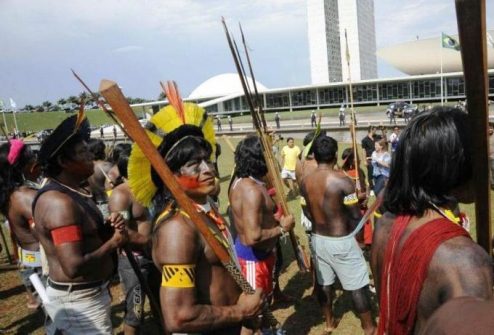 Indigenous populations inhabit a large part of the Amazon Rain Forest. Their cultures, traditions and beliefs have existed for centuries, have survived colonialism and represent a priceless, non-material patrimony of precious knowledge of the rain forest. For example, the Tisame people of Bolivian Amazonia use 47 different species of plants for medicinal purposes. It is on this sort of practical knowledge that botanists place their hope to be able to classify the native plant species. In Brazil alone, the indigenous people are estimated to be 310,000, of whom around 280,000 live on reserves. These reserves make up only 2.0 % of the entire Brazilian Amazonian lands. The protection afforded by the presence of indigenous communities within the protected areas has helped to prevent the deforestation of those territories.
Nevertheless, in other areas of Amazonia, the deforestation continues and, together with it, the process of occupying the forest. One need only think that non-indigenous people, who emigrated to Amazonia from in the sixties to the nineties, increased from about 2 million to around 20 million individuals. Inevitably, the numerical disproportion and differences in lifestyle between ‘Western’ migrants and the indigenous populations, especially those not protected by reserves, has, over the years, created numerous conflicts. Only one third of indigenous groups noted in 1900 are not extinct today.
The loss of these people causes not only the loss of cultural and anthropological riches but also of that precious knowledge so necessary to guarantee the future and the conservation of the Amazon as a patrimony of all of humanity. 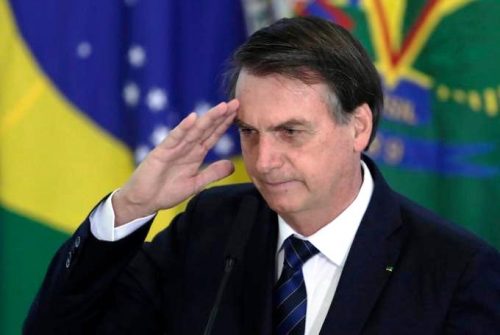 With the new government of far-right President Jair Bolsonaro, another threat for the Amazon Rain forest and its peoples presents itself. The Brazilian president said that the indigenous territories are too big in relation to the number of people who live there and has promised to freeze new demarcations and open some of them to agriculture and mining.The president has already transferred the creation and limitation of reserves from Brazil’s indigenous rights agency, Funai, to the agriculture ministry, a controversial decision that was seen as a victory for the powerful agribusiness sector.The indigenous leader Cacique Dara pointed out:  “This government is trying to exterminate the indigenous people, but our people are warriors. We don’t care about wealth, what’s important is nature”. Activists say the relaxation of the protections could lead to greater deforestation of the Amazon rain forest and threaten the (Alessandro Cadorin)