The invasive plant is spreading rapidly, threatening the ecosystem, the economy, tourism and the survival of the two million people living on the banks of the vast basin. Without investment and strict control plans, the infestation is in danger of spreading to the Blue Nile.

Also the Ethiopian Lake Tana, the second largest lake in Africa, is threatened by the water hyacinth which has already seriously damaged Lake Victoria that is the largest lake in the continent and the source of the White Nile; it covers parts of Kenya, Uganda e Tanzania. The Lake Victoria infestation which still threatens biodiversity and fishing in the basin had even succeeded in preventing access to the important lake port of Kisumu, the third largest city in Kenya through which flows a considerable part of the commerce of the region. The spread of the invasive plant is now possible thanks to large investments. 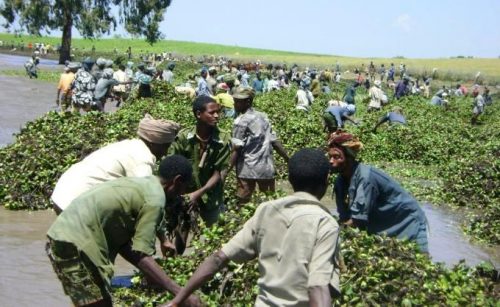 The water hyacinth, known in Ethiopia as the Emboch, was first noticed in Lake Tana in 2012 by the biologist Ayalew Wonde. In six years, according to research by the local Bahir-Dar University, it covered 50,000 hectares of the lake. It is considered one of the hundred most dangerous plants in the world due to its ability to spread rapidly, building an opaque layer over the surface of the water, while its roots absorb nutrients and oxygen, reducing resources for local biodiversity and endangering the entire ecosystem and the economy and, consequently, the chances of survival for the populations living close to the infested basins.According to the German organisation Nature and Biodiversity Conservation Union (NABU), which operates in the area, there are about two million people who live off the resources of Lake Tana, especially from fishing, but also from the pastures and the wet river areas that make agricultural production possible.
The fishermen say they have already noticed a considerable reduction in fish numbers while the farmers are aware that the water hyacinth infestation is contributing to the desertification of the wet coastal areas, dramatically reducing their income. 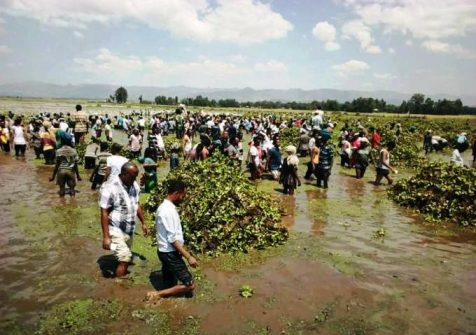 In the areas most affected by the infestation, those on the west bank, thousands of fishermen, farmers and herdsmen depend exclusively on the resources of the lake for their survival. Fishermen also complain of damage to their boats that are often entangled in the thick mantle created on the surface of the water by the infesting plant. Serious harm has also been done to the tourist industry since the lake is now only partially navigable.
Recent research shows that the infestation by the water hyacinth is one of the causes of the reduction of the surface area of the lake because it accelerates evaporation through the leaves of the plant. The researchers have stressed that, unless the infestation is halted soon, it will also reach that part of the lake which is the source of the Blue Nile endangering also the artificial basin called the Grand Ethiopian Renaissance Dam (GERD), built along the river, and, consequently the generation of electricity on which the country depends for its industrial development and for its balance of payments achieved by the sale of energy to surrounding countries of the region. 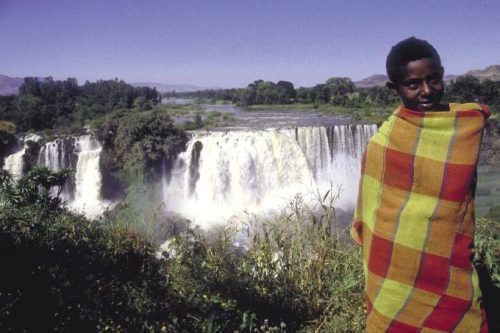 A campaign of information and mobilisation of the population is under way in the area (see photo) to control the infestation but results so far have been far from satisfactory.
The water hyacinth is originally native to Latin America, especially to the basins of the Amazon and Orinoco rivers where it is the favourite food of the Manatee, a giant cetacean herbivore that lives in those waters and controls the spread of the plant. The water hyacinth was introduced to Egypt in the eighteen hundreds as an ornamental plant. It found the climate especially favourable and rapidly spread to other countries of the continent where there are no controlling biological factors. It was already seen in Ethiopia in 1965, but the dangers it brought were not understood. Consequently, little or nothing was then done to limit its spread.