Death is a sad and dark time among the Baganda. Loss of a loved one is usually a very painful time. The Baganda don’t keep a dead body for long, so that when someone dies in Buganda, the body is kept for one day and buried on the second day.

The Kabaka of Buganda never attends any burial. Twins in Buganda are not allowed to bury another twin, blood-related or not. When a twin dies in Buganda, they will say the twin jumped to another life; they believe that when one says a twin has died, death will take another twin.
When someone dies in Buganda the sad news is supposed to be reported to the Kabaka of Buganda and they tell the king that they were guilty as charged for losing someone.
When someone dies, rituals in Buganda are performed depending on the deceased’s status. If the deceased is a father, all his children are gathered together. The Baganda believe that when a man dies that is the best time to gather together all his children. Once the children are gathered, the deceased’s sister gets banana fibres, splits them into thread-like sizes, then makes sure that every child has a piece of it tied around their waist. The widow will also be asked to tie a banana fibre around their waist until the deceased is buried.Children and the wife and other family members are not allowed to wear shoes or any footwear; they are not allowed to bathe for four days nor sleep in their beds until burial is done. If a man loses his wife, he will be required to tie a piece of banana fibre around his waist or a piece of cloth, dress up in a Kanzu (tunic) and walk barefooted until his wife is buried. 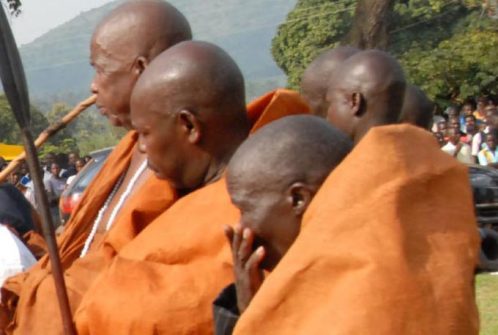 Before burial the relatives of the deceased will each be given a piece of the banana trunk which they will use to message the deceased’s body; this is referred to as washing or cleaning the deceased’s body. After that ritual, the deceased is wrapped in bark clothes depending on their statuses before they are buried. After burial all the orphan’s hair is be cut off as a sign of mourning.
If a married woman loses her father, her husband is expected to accompany her to her parents’ home with pieces of bark cloth which will be used to bury his father in-law. After burial he is expected to buy her a new gomesi (traditional dress) before he can take her back home. The longer he takes to buy the gomesi the longer the woman takes mourning her father.This is a gesture to assure her that he would take care of her and likewise, when a man loses his father, his wife is expected to buy a tunic for him to signify that she would take care of him. 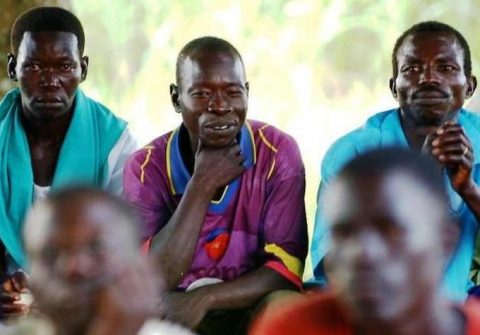 A family meeting to hold the last funeral rites convenes and here they discuss when to hold the ceremony, what they need for the ceremony and the people who should be invited. In the olden days, they would not hold prayers and it would purely be the performing of traditional rituals, then feasting since it is the period that marked the end of mourning. People are not expected to mourn but to celebrate the life of the deceased. If the deceased was a wealthy man, holding his last funeral rites would require protocol and permission from the clan head because he has to give them permission when to hold the ceremony and also name a suitable day for him to be present at the ceremony, to make sure his property was correctly distributed the way it should be. 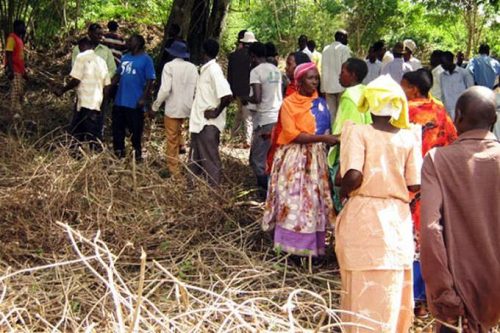 The family head would write to the clan leader (Owa Kasolya) explaining to him and requesting for permission to hold the ceremony, but if the deceased had no wealth the family would hold the ceremony without permission. Here he would write to in-laws informing them about the ceremony that would be held at a particular time. The purpose of this letter to the in-laws would be to invite them to the function.
In the olden days, preparations of the last funeral rites would begin a month before. They would collect bananas, ripen them because they would be used to make a local brew (Omwenge Omuganda) and once the brew is in its fermentation stage, the ceremony will then be in its last stages of preparations.
The family begin collecting food which is mainly matooke from friends’ families and in-laws. They get the cows for the ceremony ready and get drummers and singers ready also. Family members would begin building up tents where people would sleep during the function and a married woman would also make sure that a tent for her husband and his relatives was put up. 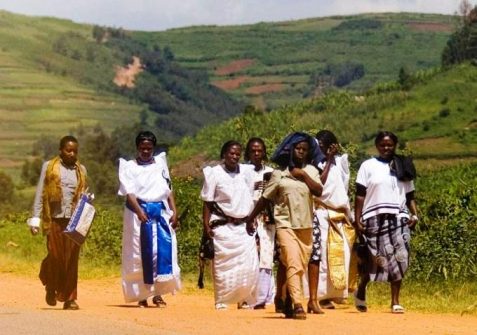 This function takes two nights and one and a half days. On Friday evening the function begins and they begin with drinking the local brew, eating and making merry. This night ceremony is referred to as Okusuula mu ngalaabi (eve of the last funeral rites) and a group of people, mainly family members, enter one house, close the door and begin to sing and dance while drumming till dawn. A child who is Omujwa (a daughter’s child who could be an aunt or sister to the family) who is usually not from the same clan as the deceased, is given a gourd filled with omwenge omuganda which she will take to the people singing. She knocks at the door and one person opens it and as it opens, all the occupants come out of the house singing. That is when the lumbe (death) has been brought out of the house and people will join them in the singing and dancing. Later on in the day an heir and his assistant who is a woman, will be installed and given tools to use.
After the installation of the heir/heiress they are given a basket, spear, stick, knife and coffee beans which will be put in the basket and are supposed to be symbols of the tools.
Then the clan leaders will bring bark clothes which they will make him and his assistant wear. After that ritual has been performed, people will be called upon to bless the two and they bring gifts to the two while blessing them.
In Buganda, the heir for the deceased is chosen according to his sex. If the deceased is female, an heiress will be chosen and she will be referred to as a mother to the deceased’s children and ceremonial wife to the deceased’s husband. She is expected to act as mother and wife to her family. Once in a while, she pays them a visit and gives advice to them and the children also pay her a visit. In some cases, she will also inherit the deceased’s property and wealth if the deceased was childless.
If the deceased is a male an heir will be installed and he will act as a father figure to the deceased’s children and ceremonial husband to the deceased’s wife, take care of the family and in the case that the deceased had property, he would also inherit it.
He would become the head of the family and many family decisions will not be made without his input. His assistant is usually a woman who will act as his helper.
In Buganda, the heir and heiress are usually chosen by the deceased before he dies. In case he died without naming his heir or heiress, the family will choose someone according to their capabilities and responsibilities.

Buganda Today
Buganda covers the whole of Central Uganda and the Baganda are found in over eight districts in Uganda. The Baganda still have their monarch and are still the strongest kingdom and culture in Uganda, they are divided twenty Buganda counties Buyaga, Bugangazzi, Ssingo, Bulemeezi, Buruuli, Buweekula, Kyaddondo, Bugerere, Busujju, Mawogola, Ggomba, Butambala, Busiro, Kabula, Kyaggwe, Kkooki, Buddu, Ssese, Mawokota, Buvuma. They are headed by Kabaka who is Ssabasajja Ronald Muwenda Mutebi II who is the 36th Kabaka of Buganda.The Baganda still value their culture and norms although a lot of things have changed. They have still preserved the burial ground of their former Kabakas and the royal family members at Kasubi tombs. 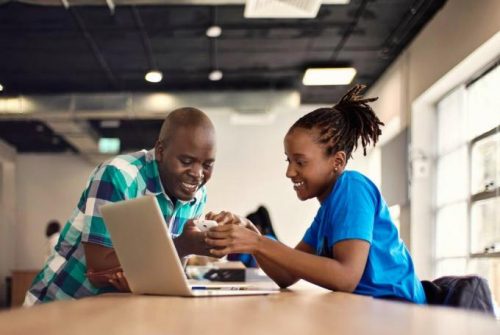 A lot of things have changed in Buganda today but so many things still remain intact among the Baganda, the crowning ground is still held at Naggalabi and the Buganda kingdom still exists although with their headquarters in Mmengo.
In Buganda, the traditional marriage was certified by the kingdom and it was enough and the couple would be considered as married.
Today after the customary marriage in Buganda, they are issued with a certificate which is supposed to be used to register the marriage at the registrar of marriages.
In the olden days, during the last funeral rites, it would purely be the Ganda rituals, and culture but today many homes prefer to hold prayers and show the heir to the people present instead of the long tradition which many say is primitive.
Very few Baganda still hold the twin rituals and many twins are dedicated to the Lord God for blessings instead of to the gods and spirits like in the old days. The Kabaka in Buganda has always been the fountain of honour and today he still holds his place of honour among the Baganda who will defend their king with their lives.