Elderly people are the preservers of the historical memory of a community and the carriers of medical knowledge and the secrets of the jungle. A reflection on the threat posed by the Coronavirus pandemic in the Amazon.

The telling of stories passed down from generation to generation is a primary form of wisdom communication among indigenous communities. The elderly people know the origin and the history of their group and can narrate it over and over again, especially on the occasion of ritual greetings. The old people of indigenous communities transmit, orally, stories and traditions to their children and grandchildren. There are different stories for different places and times. Some stories are narrated during the day, others at night, and others while sitting in a maloca, walking through the mountains or while sailing a canoe.
The old men and old women of indigenous communities believe that everything has a reason for its existence and tell the stories about the origin of the world – how water, rain and rivers formed. These narrations refer to the river-tree or the tree of abundance which, according to indigenous narrations, gave rise to the great Amazon River, to the different types of forests, different trees and thousands of plants and herbs that have healing properties. 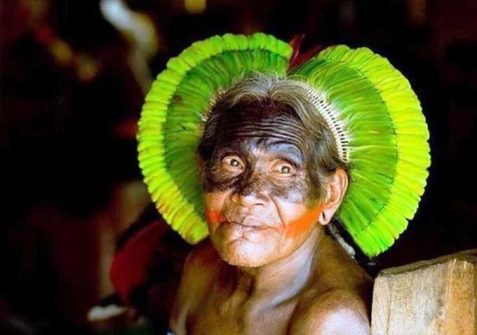 The stories about the origin of animals are also very interesting; they are about all different wild animals of the forest and the fish of the water world and their anatomical characteristics, their life-cycle, breeding cycles, bio geographic distribution, and the rules concerning hunting and fishing.The way the elderly speak about their ancestral territory is amazing, they recite, in the form of a litany, hundreds of names of geographic sites of the Amazon basin, beginning with the mouth of the Amazon River and going up the territory, naming  site by site through a mental journey that covers thousands of kilometres.
The elderly of indigenous communities have great mastery of shamanism. They use a primitive language to communicate with the spiritual owners of nature and time, with whom they negotiate to fix the disorder of the world or the imbalance in the flow of energy between nature and humans. Basically, they operate to maintain world order and avoid over-exploitation of resources, which is a cause of diseases. 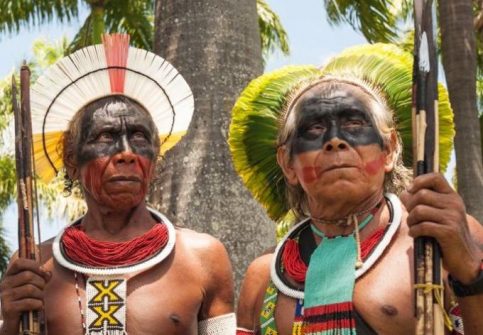 An old man sitting on a bench thinking in the centre of a maloca enjoys the respect of the community, since the elderly continue to heal diseases until they die and pass down their knowledge to the next generations.
The elderly of a community are also particularly skilled in the art of building the  maloca, because they know its architecture in detail, the types of wood used for its construction, the vines for moorings, the quality of the palms for roofing and many other specifics. Old people also make artefacts for hunting, fishing and for rituals,  which stand out for their colourful feather crowns. Many of the crafts made today still retain a significance beyond the strictly utilitarian. The old people of indigenous communities also master the art of basketry. Woven baskets have different significance depending on the type and pattern of the weaving, which represents the formation of the personality of a young adult. Old indigenous women play an essential role in the community. They are considered as the mothers of abundance and the caretakers of well-being. Besides sharing with men the above-mentioned activities, old women master agriculture and food. 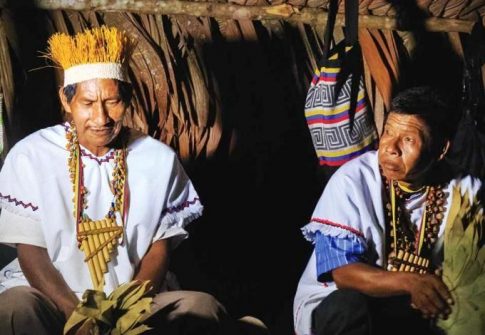 They have, in fact, good knowledge of more than a hundred cultivated plants and the nutrients and the light they need to grow. More than 150 varieties of plants and herbs are known in the Colombian Amazon alone. Old indigenous women also have knowledge of the planting time, the different forms of cultivation, the harvesting calendar, and the seed preservation, basically they have the agronomic knowledge of an entire system of agriculture in the tropical forest.
Their knowledge also includes food transformation, so for instance, they are able to convert cassava, which can be poisonous, into a healthy food through the elimination of toxic components. 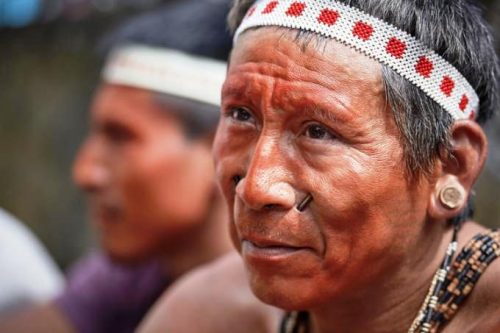 Old women of indigenous communities also know how to use plants and herbs  for the cure of diseases according to shamans’ prescriptions. Indigenous grandmothers  know old stories, tales and ritual songs which they narrate and teach to their grandchildren transmitting to them, by doing so, myths, legends, traditions of their ethnicity.
These old women are also very skilled in the art of pottery. They are responsible for the manufacture of pots, trays and a whole set of artefacts made of clay. They know the characteristics of each type of clay, and what to do and to add in order to improve their consistency. They also master the ceramic burning techniques, the type of firewood used, the firing and colouring processes, and know the methods to make ceramics shine. Old indigenous women make ceramic artefacts for daily life and for rituals.
The elderly play an essential role in indigenous communities. When we lose an old person we lose a library, we lose mastery, traditions and culture. In these times of COVID-19, it is necessary to take care of indigenous communities, to guarantee their isolation in order to protect them and support their self-care, especially that of the elderly as they are the most susceptible individuals and the key group for cultural survival and biocultural memory of humanity.